From Beetles to Butterflies and Twenty-one Endemics

Here's an odd assortment of stuff from the first day of six on this tour to Jamaica, my 14th to this island nation.

First of all, we saw no endemics until about 12:45 a.m. We had a very relaxed morning at the hotel in Port Royal, where the day before I found the same long-horned beetle species I had photographed in February. This one was a more typical-looking Eburia tetrastalacta. 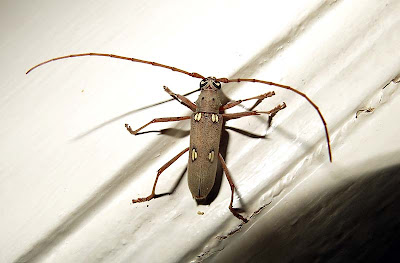 Most of the wintering wood-warblers had departed, so the American Redstarts, Prairie Warblers, and such came in ones and twos. The best bird was a rare Great-tailed Grackle that flew over the hotel just before our very slow-paced breakfast.

It looked like they'd had some rain since February, as there were a few more flowers out. I assume this fragrant jasmine (presumably Jasminum nitidum) is an escaped exotic. 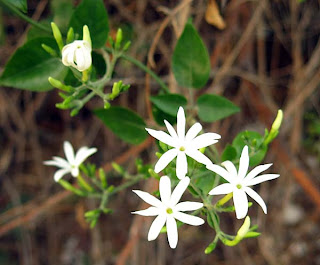 A pair of American Kestrels were breeding in the ruins of an old building next to our hotel. Most of them here are very white, while a very few are all dark rusty; this one might have the influence of a dark morph relative in its distant past, as the underparts have a few rusty feathers. But it's not quite intermediate either. 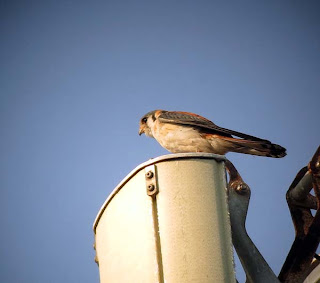 I can never remember how to tell Tropical from Mangrove Buckeye, so I snagged this quick digiscoped shot. Sure enough, the abundance mangroves indicated correctly that this was indeed Mangrove Buckeye. 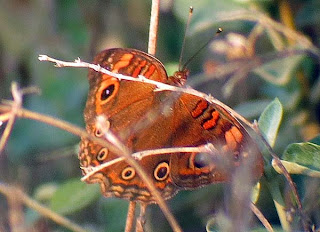 We had great views of one White-tailed Tropicbird at Hectors River, with a second one coming in as we left for the Ecclesdown Road. This is where the endemics came in quickly. It didn't seem like we were being bombarded left and right with new birds, and at times it seemed very quiet. But after just four hours of walking the road we had seen 19 of the island's 27 AOU-accepted endemics (there should actually be more, with several distinctive subspecies), including amazing views of Jamaican Blackbird and a very close, singing Blue Mountain Vireo. This male Jamaican Spindalis was the only bird I managed to digiscope. 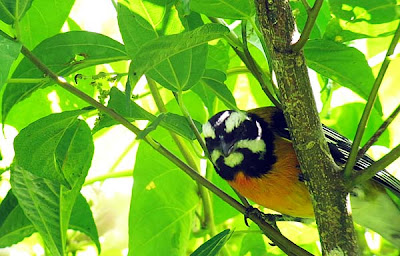 But another exciting endemic on the Ecclesdown Road was Pan Hairstreak, Electrostrymon pan, not a bug I see every year. 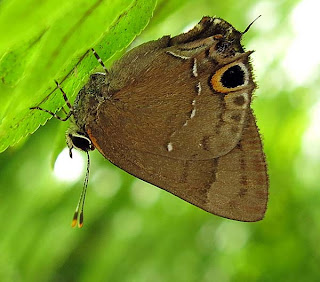 Finally, at our hotel, the lovely Goblin Hill, we saw a pair of Jamaican Lizard-Cuckoos at dusk and a Jamaican Owl shortly thereafter. Of the remaining six endemics, the Crested Quail-Dove always causes the most worry.
Posted by Birdernaturalist at 8:28 PM