Mostly Birds In Jamaica – And Cleaning Up the Endemics

We saw Jamaican Becard, the 27th and "final" endemic this morning, our 4th day of birding. Plus everyone finally got good looks at Yellow-shouldered Grassquit, though it would be nice to get better views of it and a few other things. Jamaican Euphonias have been elusive, though we all saw one well on our first afternoon, so I hope to see more of them. As far as extant subspecies goes we're missing only Grasshopper Sparrow and Plain Pigeon. The former is not too hard, but nor is it so distinctive. The latter is very rare, so not much hope there. So if you're paying attention, you'll note that yes, we did see Greater Antillean Elaenia, an oddly elusive bird. I think it just has a very small population which breeds only at high elevation, and that very small population disperses very widely throughout the island (and remains silent) the rest of the year. We saw one yesterday afternoon feeding in a fruiting tree at our hotel, Starlight Chalet (along with 4 other species of Tyrannidae), and this morning one was calling in exactly the same spot where I had one 3 years ago, and where I looked with my group in earnest this past February to no avail. We also got great views of the lovely Rufous-throated Solitaire today. We really padded the wood-warbler list with Cape May, Black-throated Green, Magnolia (rare), and Bay-breasted (rare) being new, but it was clear that the Swainson's Warblers had all moved back north.

Photo highlights from today included this Northern Potoo I spotted on its day roost – or perhaps a nest. I had heard one was in the area, but I'm proud to say I found this without having been told where to look. I last saw one here three years ago (I think), but in a different tree. 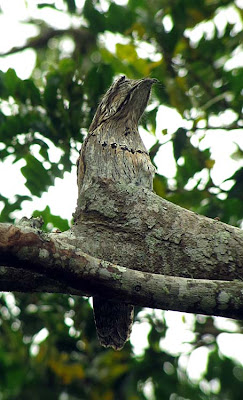 Bahama (Hill's) Mockingbirds were vocal even in the windy heat of the afternoon, some elusive, but this one very cooperative. It did several little flapping song flights just a few feet above its perch. We later saw one that was foraging silently in the understory of the dry forest at Portland Ridge. 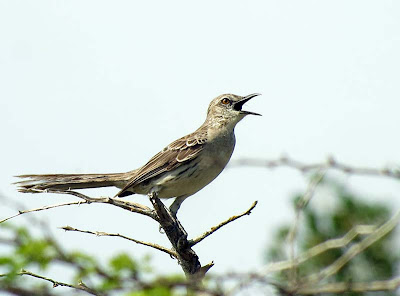 This Mangrove Cuckoo was in the same area as the mockingbird. 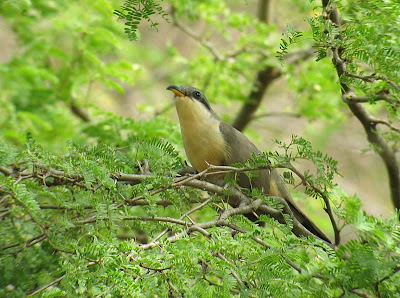 We saw the endemic subspecies of Stolid Flycatcher here as well, but as I noted in my blog series at Birdingblogs.com last year, I found it to not be very vocally distinct from other subspecies. As a matter of fact, a recent paper looking at Myiarchus genetics found that it should probably be lumped with La Sagra's Flycatcher – which indeed also doesn't sound all that different.
Posted by Birdernaturalist at 7:03 PM