I last left off when we arrived in Monteverde, and now we have just one more day left on the tour. Time has flown.

It's been amazing to have virtually no rain on the tour. On one afternoon at Savegre we had a brief shower when we pulled out our umbrellas for about 10 minutes. Then we drove through an isolated shower on our way to the Osa Peninsula. We all awoke to a brief shower here in the Caribbean lowlands at Sueño Azul Resort the night before last, but otherwise it's been sunny, but overcast in afternoons, and not too hot. Perfect birding weather. My own bird list for the trip has reached 460 species in 12 days, and it's hard to stay caught up with lists, photos, and research. Here are some photos from our day at Monteverde and our travel day to Arenal Observatory Lodge.

At Monteverde we began with two resplendent Resplendent Quetzals right at the parking lot. I was the only one to see the Buff-fronted Quail-Dove on the trail as we started to head into the forest, but three of the participants had seen one up at Savegre Lodge a few days ago. Not far down the trail I spotted an orchid growing on a rotten log in the understory, and as usual I stopped to smell it, and it was heavenly. One of the group has a highly trained nose, and he declared it was of ethyl vanilla, and I thought it smelled like a roll of freshly opened Necco wafers. My Costa Rican contact Mario Rosas quickly identified it from my photos as Prosthechea vespa, a new one for me. 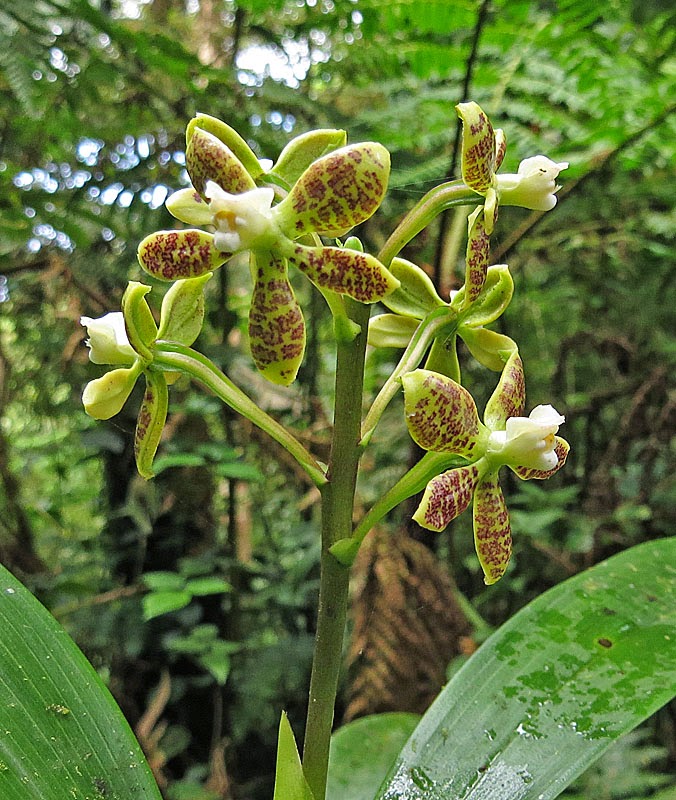 Not far after we passed the orchid, two different pairs of Prong-billed Barbets began duetting, one just back down the trail, but by the time we got there, they had gone quiet, and no one was spotting any movement. We stood there for at least five minutes, searching all the branches, hoping they would move or vocalize, and I noticed this huge shelf fungus growing on a tall snag in the mid story. 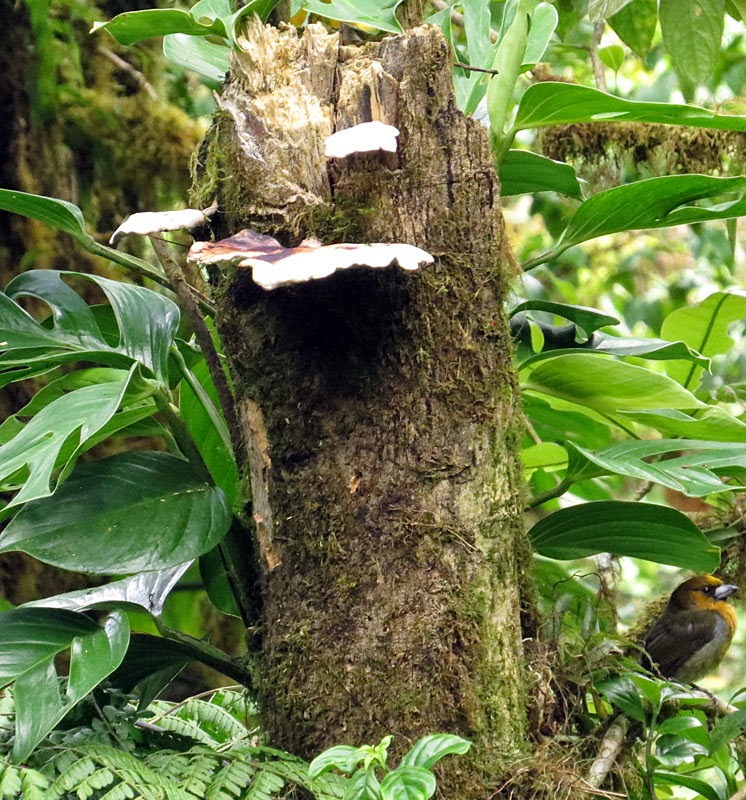 As I scanned it my eyes fell on the shape of this gorgeous Prong-billed Barbet right next to the trunk. Later its partner began excavating a nest on the left side of the stump, not far below the fungus. 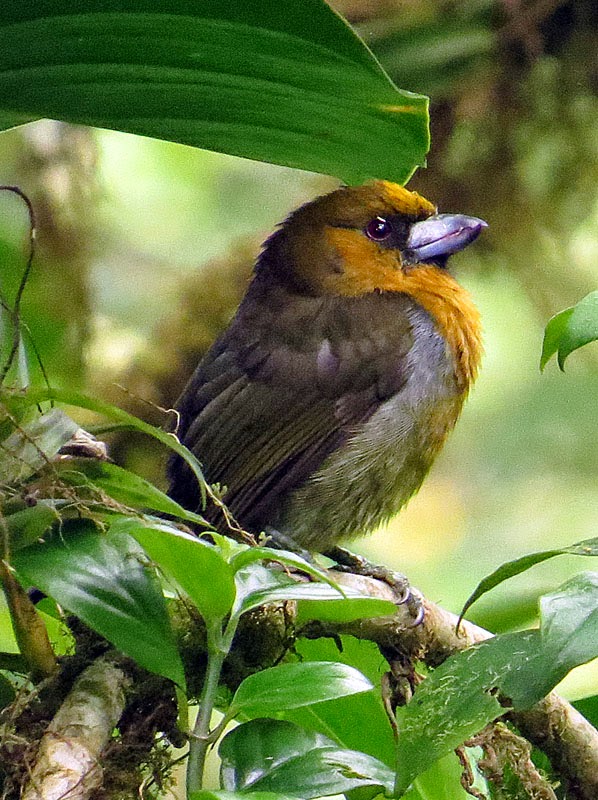 Our hike took us all the way to the continental divide, unusually visible, but typically windy. 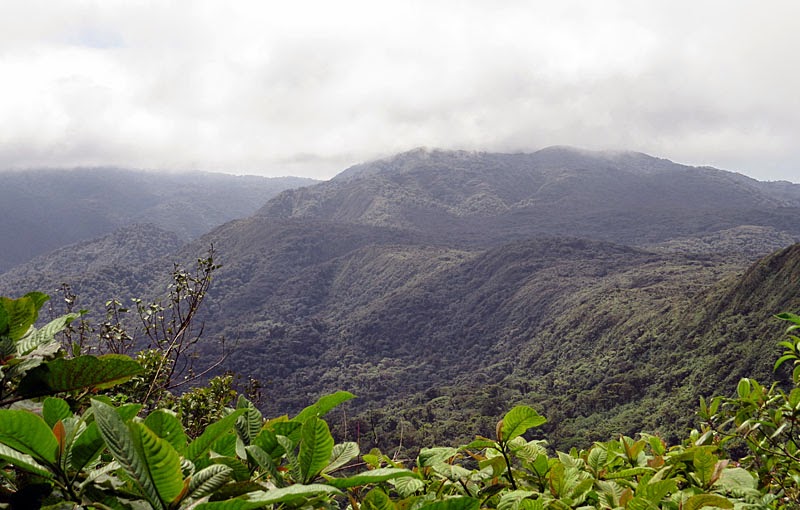 I'd love to know more of the plants here, but the diversity is daunting. The gesneriad (African Violet) family is well-represented here, especially the genus Drymonia. I think this one is D. lanceolata. 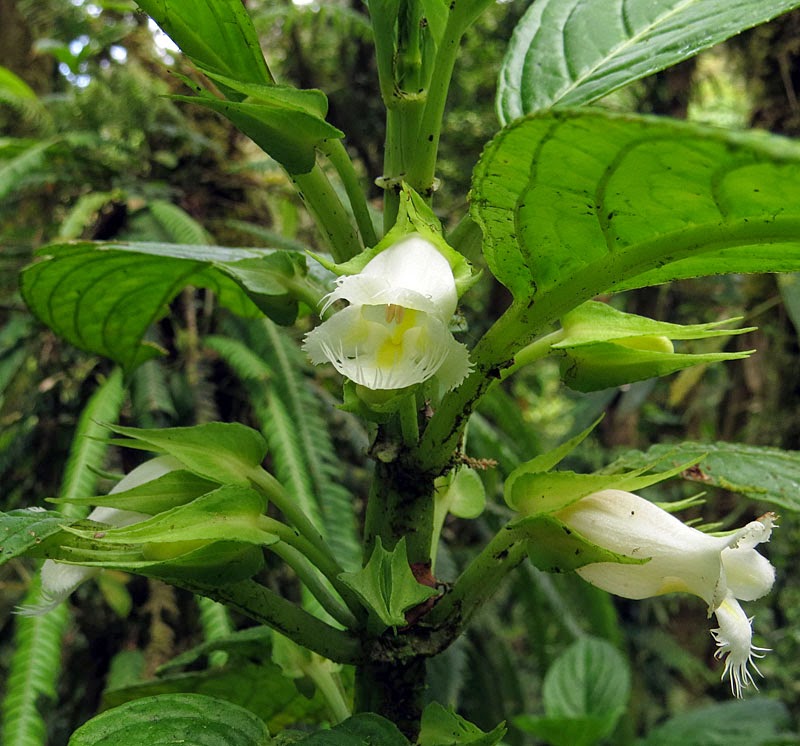 On the way back down a activity wave of birds coincided with us and another birding group working their way up the road. The birds included some very close Three-striped Warblers, an Eye-ringed Flatbill, and at least two Orange-bellied Trogons. This species is flanked on nearly all sides by the red-bellied but otherwise identical in every other respect Collared Trogon. I don't know how much intergradation there is, but I suspect a lumping might be in order here. 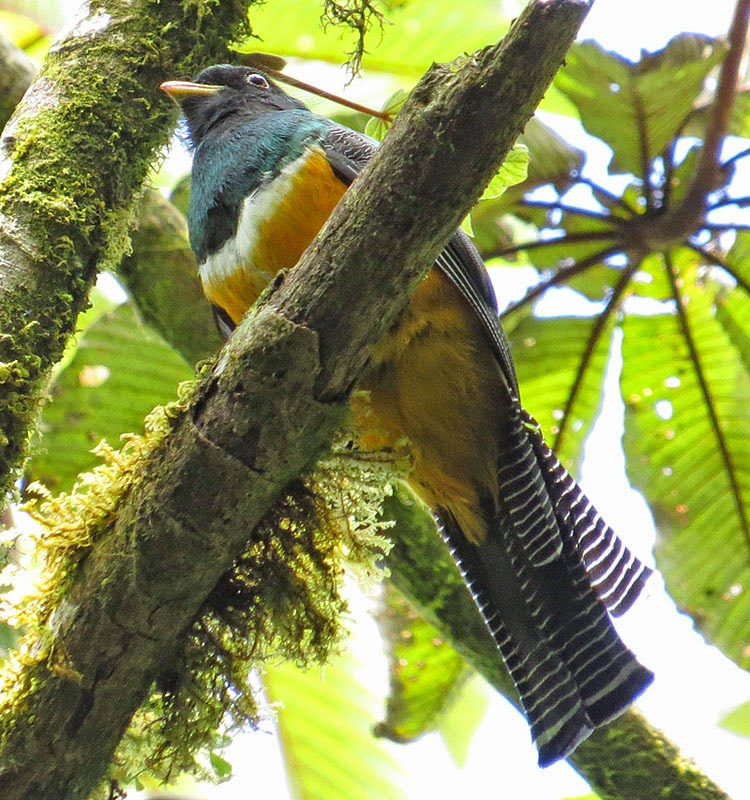 We made the usual stop at the Hummingbird Gallery for the seven of the expected eight species of hummers (we did not see any Green Hermit), including Purple-throated Mountain-gem and Green Violetear. 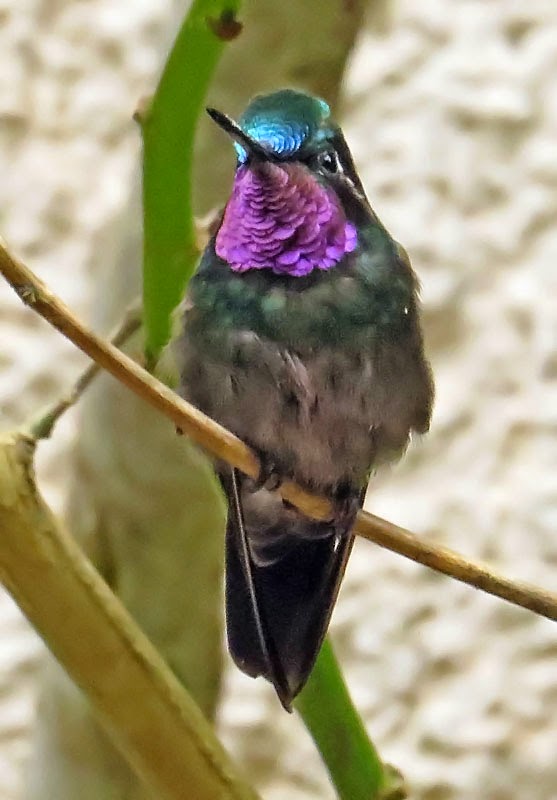 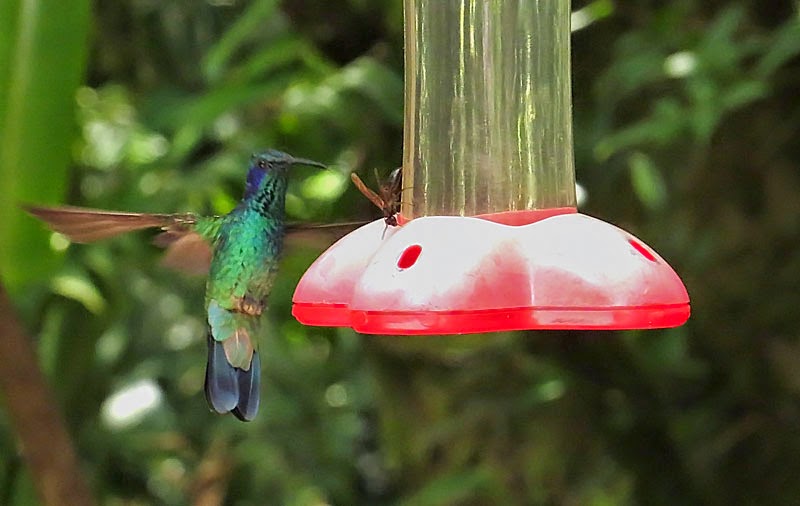 The morning we left, four of us got up extra early to try for owls, and we scored two pairs of Mottled Owl. 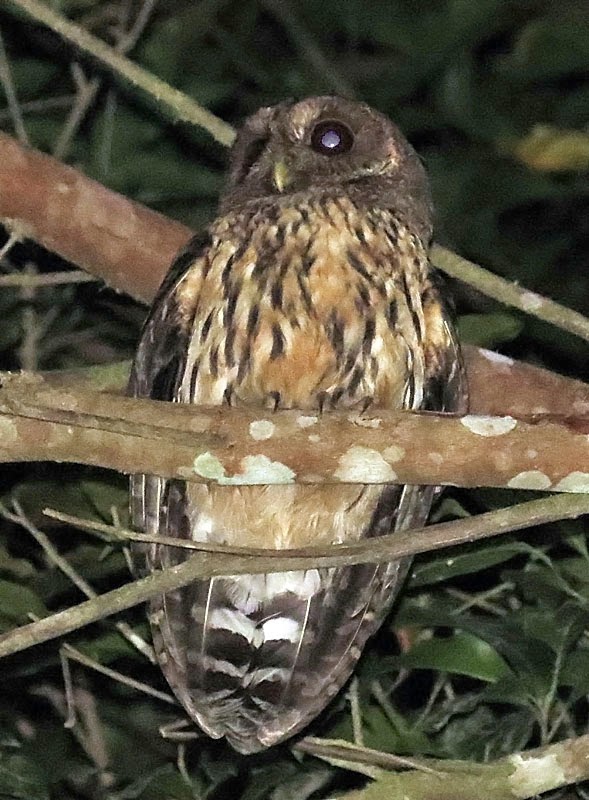 Before leaving the area we spent a couple hours at the Santuario Ecológico where we enjoyed the amazing, rich velvet duets of Rufous-and-white Wrens and had a fabulous experience with this Chiriqui Quail-Dove. 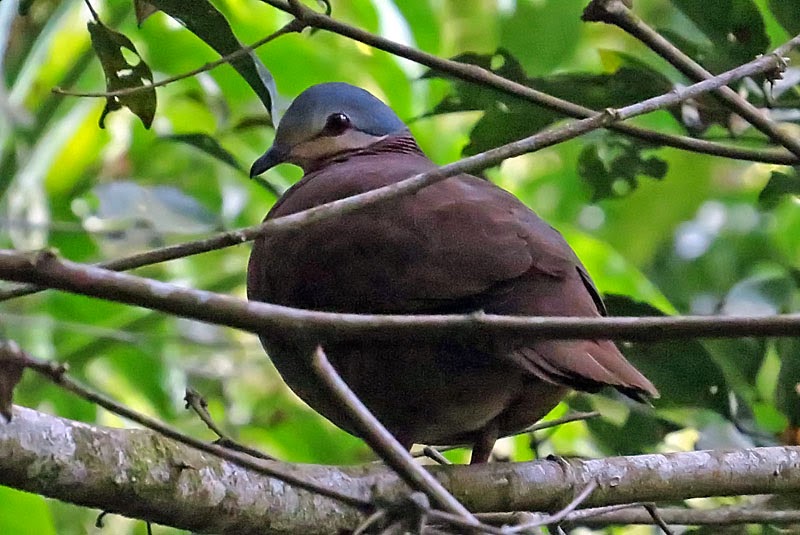 Our next destination, largely to break up the drive all the way to the Sarapiquí region is the touristy-filled Arenal Volcano area in the Caribbean Foothills, a transition region between the Cordillera Central and the Cordillera de Guanacaste. We stopped for this photo looking at the western flank of the mountain (which stopped erupting regularly four years ago), and then drove to our lodge on the southern flank. 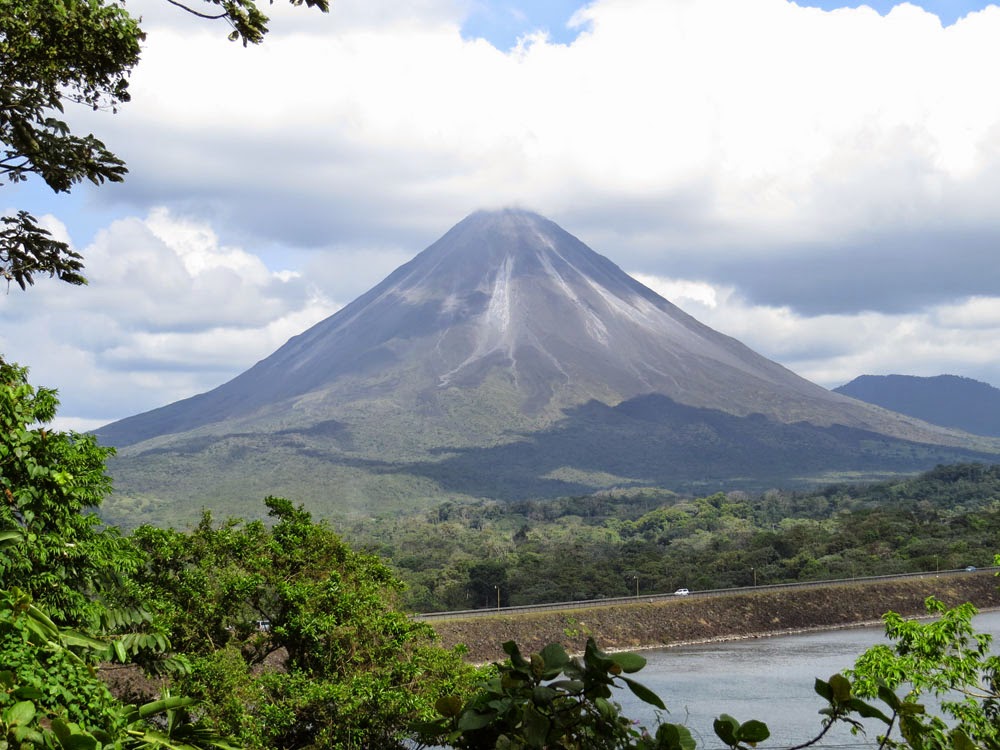 On the way we surprised a male Great Curassow in the road. They have increased in numbers greatly in Costa Rica since I first started guiding here 18 years ago. 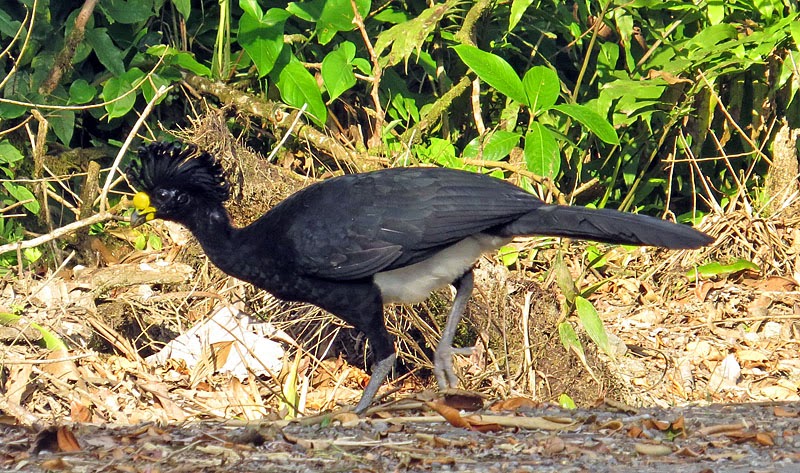 This female Hercules Beetle (Dynastes hercules) was crossing the road. My driver Ricardo spotted it as he straddled it, stopped the bus, opened the door, and told me to go get the beetle in the road. One of my participants is fine with snakes, but she really didn't like having this exceedingly slow beetle, mouth parts free of any biting apparatus, inside the bus. 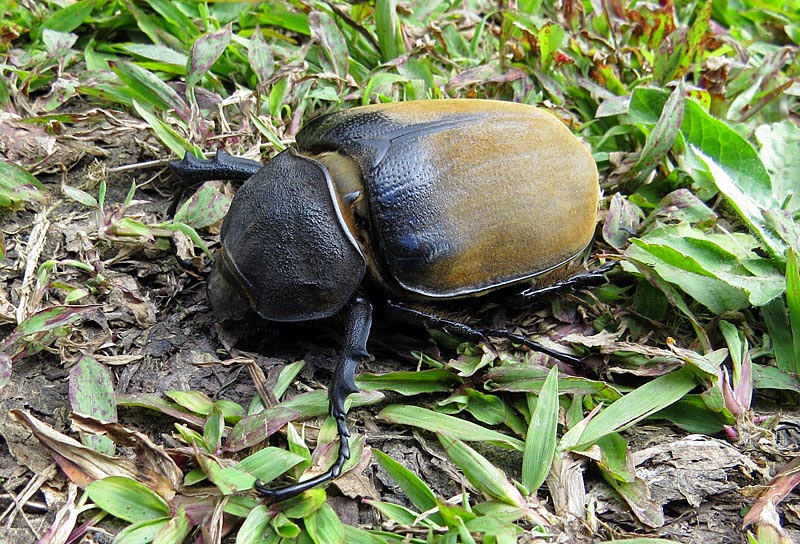 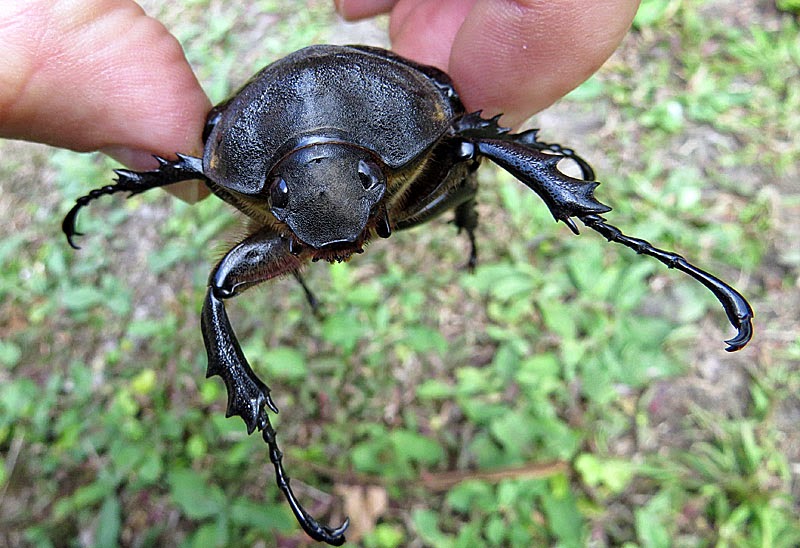 It seemed to be a day for beetles. It's been too warm and dry for moths, it seems, and the lights at Arenal Observatory Lodge aren't quite bright enough, but I did find just these few beetles at one light along the driveway.

I'm pretty sure this one is a soldier beetle, family Cantharidae. 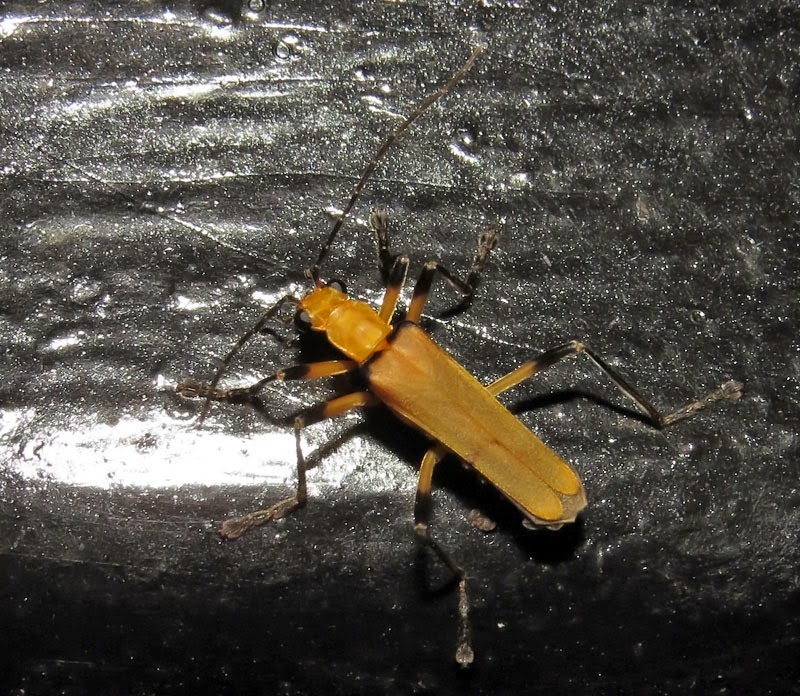 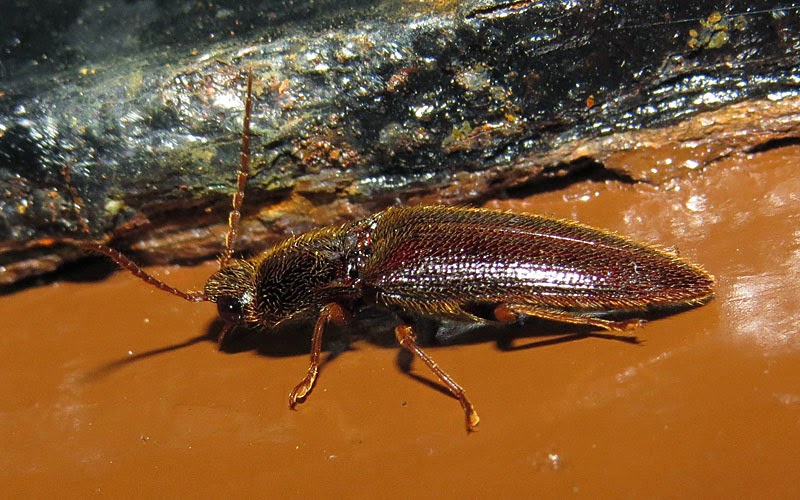 This tiny thing is in the obscure family Ptilodactylidae, the "toe-winged beetles," with just 500 species worldwide. (P.S. I wonder if "toe-winged" involves a mistranslation of "ptilo," at it does look a bit like "ptero." The silky-flycatchers are the Ptilogonatidae, known for their soft feathers, and that's the meaning of that prefix. It also seems to have misconstrued the logic of word order. If you think "band-winged," "stripe-faced," or "spot-breasted" you realize that "toe-winged" means it has toes on its wings. Correcting the translation of "ptilo" and then fixing logic of the word order, I would then suggest "feather-toed beetles" for the family name.) 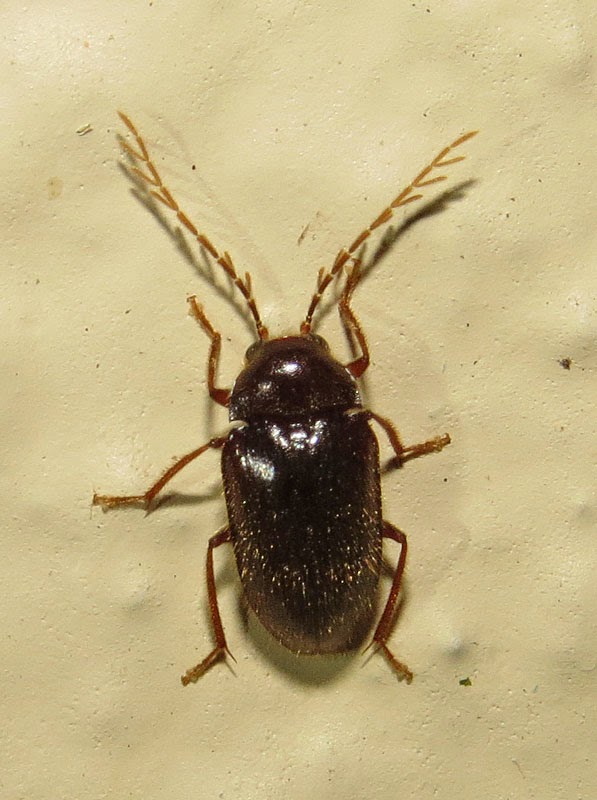 Finally, I actually found a name for this gorgeous longhorn on the New World Cerambycidae Catalog website, and it's quite clearly Sibapipunga beckeri, a monotypic genus. Posted by Birdernaturalist at 8:17 PM