A Third Visit With Mr. Nutting

I saw the Nutting’s Flycatcher in California Gulch for the third time this month today. I don’t get tired of birding down there and would be happy to go back tomorrow, but my time in Tucson is running out before my next series of tours begins. Last week I went back there with Will Russell and Evan Obercian in advance of Evan’s first time leading the WINGS SE Arizona tour. We found the bird within seconds of parking (Will wasn’t even out of the car yet). This time presented me with some unique challenges.

One challenge was birding with a couple in their late 70’s and early 80’s who show various and obvious stages of hearing and sight loss as well as expected issues with balance, strength, speed, and stamina. I may not be at my peak either, and Jeff and June hold a special place in my heart. I met them when I was 20 years old, seemingly yesterday but actually over 26 years ago, when I was a junior in college during my year abroad in Freiburg, Germany. They have four lucky children of my generation, so I remind myself to cherish my time with them. 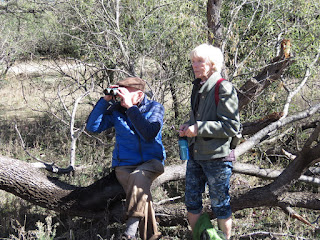 Another issue was the status of the water in the gulch. It must have rained well over an inch from the front that passed through this past Friday night and Saturday morning (which left about 0.6 of an inch of rain in my part of Tucson, not an insignificant amount). All of the washes were running with clear water when normally quite dry. The main drainage of California Gulch was a veritable torrent. 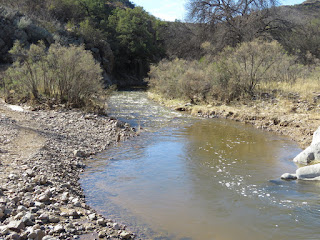 But we were able to make it in my friends’ low-clearance 2WD Hyundai Sonata as far as the usual spot at the junction of the California Gulch and Warsaw Canyon junctions. 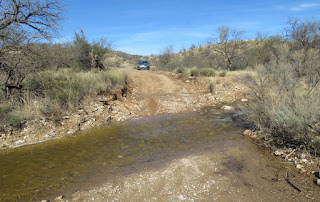 Jeff and June are not wimpy tenderfoots. Though they both grew up in New York City (Staten Island and Brooklyn), you should hear their stories of farming in Bozeman while forging academic careers in the 1960's and 70’s. They didn’t think twice about pulling up their pants and wading across the unbelievably full California Gulch. June was actually pleased it wasn’t the icy cold waters one would have expected in Montana. 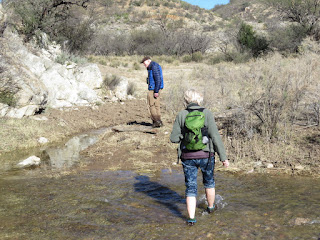 We spent well over an hour looking, pishing, wading, hobbling over boulders, and pausing for a quick picnic lunch. There was no sign of the bird. We watched a group of Chipping Sparrows, two pairs of Black-tailed Gnatcatchers, a pair of Rufous-winged Sparrows, a wonderful Dusky Flycatcher, and had a bit of excitement with what turned out to be an Ash-throated Flycatcher. I noticed what at first looked like a female Northern Cardinal (with a red bill), then changed my mind to Pyrrhuloxia when I saw the gray back, rump and tail. Then changed my mind again when I saw the brownish breast. Then began to wonder about a hybrid. This is indeed what I’m pretty certain is a rare Northern Cardinal X Pyrrhuloxia hybrid. 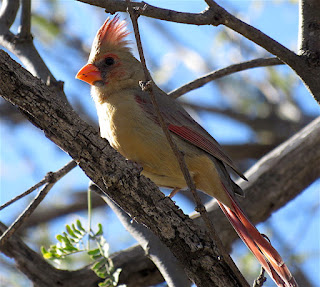 It was associating with this male Northern Cardinal. 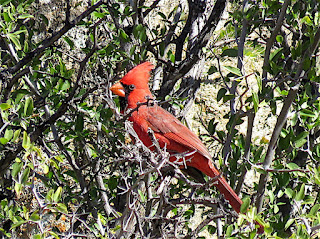 Then suddenly I saw this bird with a rich yellow belly only 10 meters in front of me, just a meter off the ground. The Nutting’s Flycatcher! We spent some 15 minutes with it, as it foraged on grasshoppers. In the past three weeks it had been feeding on bees attracted to the blooming Desert Olive (Forestiera shrevei), but it was nearly done blooming, and there were few bees today. 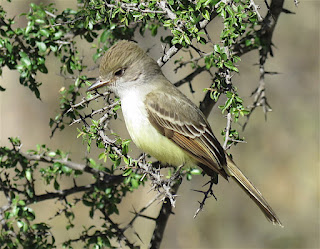 I don’t think one could normally expect to see this bird three out of three tries, but I won’t be pushing my luck on this one. I’m home for just another five days before my next bout of travel begins – Baja California, Palm Springs, Peru, Japan, Costa Rica, and Nepal all loom in the next three months
Posted by Birdernaturalist at 9:31 PM