The La Paz, Baja California Sur area is chock full of birds, thanks to the large, shallow bay and regular tides, as well as irrigated fields and a set of smelly sewage ponds. We spent all morning working our way around the Ensenada, ending at the ponds. There were no stake-out rarities this year, but past years have seen things like Terek Sandpiper, Wood Sandpiper, and Red-throated Pipit in this area. We had fun looking at the thousands of regular birds here anyway, the most abundant being Western Sandpiper. 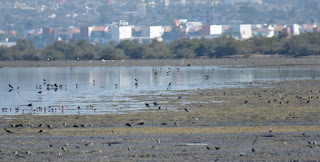 There were a few American Oystercatchers, and I’m still waiting to hear from a local ornithologist about the band on this bird. 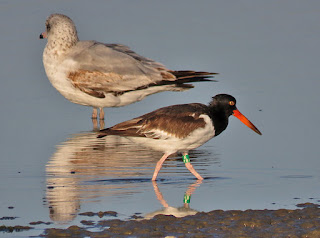 I didn’t take many photos of the many herons, egrets, and ibis, but this one Green Heron was particularly unwary and in amazing light. 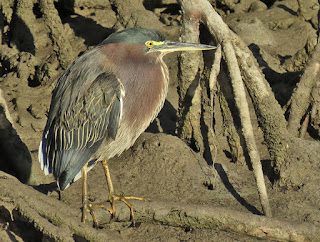 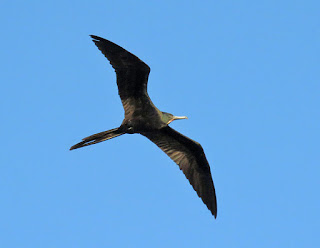 Or even perched on power lines. 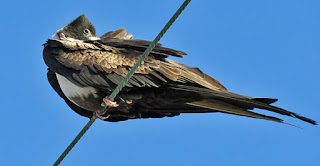 We birded near some mangroves (there are three species together here). This is Avicennia germinans, Black Mangrove, which is now in the family Acanthaceae. (Other mangroves are actually in unrelated families). 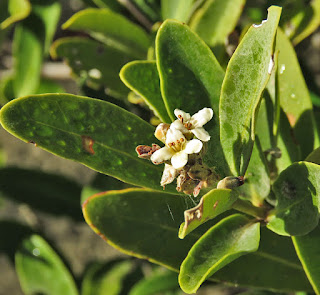 This is of course where we would find the Mangrove Yellow Warbler. Looking and sounding very different from Northern Yellow Warblers and with a completely disjunct breeding range and habitat (overlapping only in the winter), it remains a puzzle as to why these two are considered the same species by the AOU. Even the females look different. 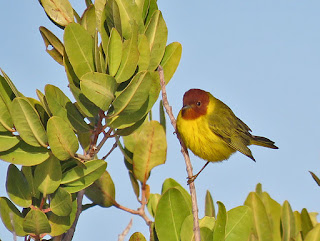 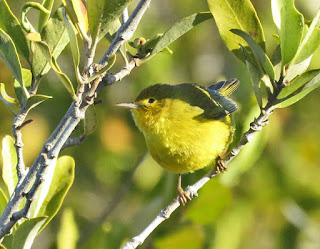 There were quite a few birds right along the waterfront in downtown La Paz, right across the street from our hotel. 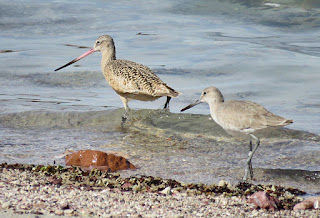 Yellow-footed Gull, an endemic of the Gulf of California 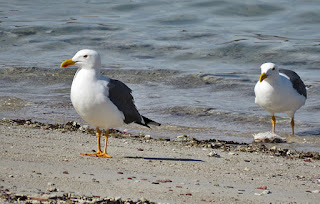 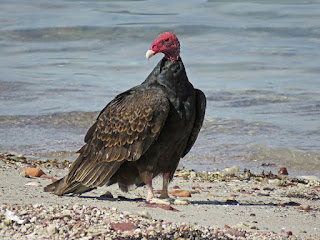 This is Ammospermophilus leucurus, White-tailed Antelope Squirrel, one of three land mammals we saw on the tour (the others were Black-tailed Jackrabbit and Coyote). 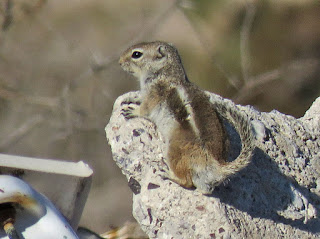 I took this photo of an Orthemis ferruginea, Roseate Skimmer female at the sewage ponds to show my participants the little flanges on either side of the abdomen near the distal tip. They are probably used to scoop up droplets of water as they lay eggs and flick them onto the shore. 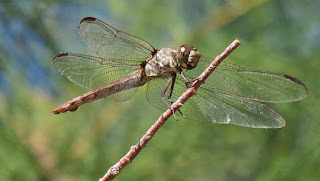 There were big flocks of Black-necked Stilts at the sewage ponds. 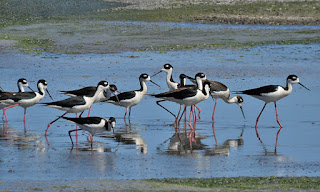 On our second morning at La Paz, before our long afternoon drive north to Puerto San Carlos, we explored the deserts and shores to the north of town.

There was zero movement of seabirds on the ocean, despite perfect visibility – sometimes we see shearwaters or boobies, even if distant, but this time we saw only the occasional Double-crested Cormorant and Eared Grebe. We walked a bit of a beach where we had this Snowy Plover and Semipalmated Plover. 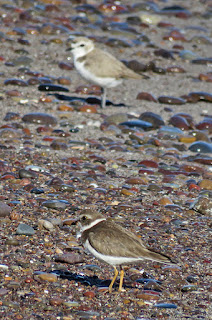 My best guess on this skeleton, given the location washed up on a beach, would be a Yellow-bellied Sea Snake. I’ve never seen a live one. 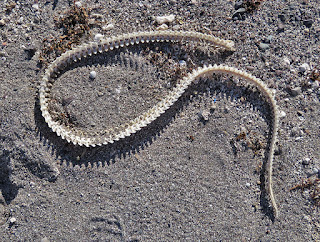 It has been quite cool this week, and perhaps this is why butterfly numbers have seemed quite low. This one is Apodemia mejicanus maxima, an endemic subspecies of Mexican Metalmark. 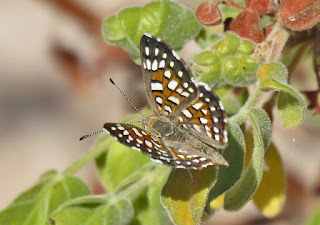 This is Ascia monuste raza, an endemic subspecies of Great Southern White, and a new one for me. 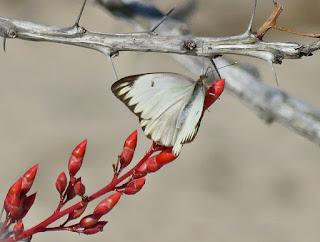 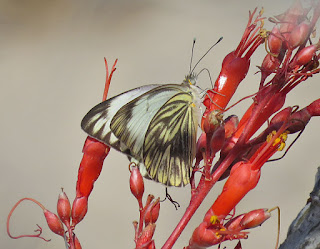 As far as I can tell, this is the monotypic and widespread Erynnis funeralis, Funereal Duskywing. 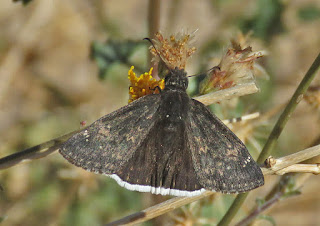 The plants in this coastal desert scrub are fascinating. This is Stenocereus thurberi, the same Organpipe Cactus that occurs in SW Arizona. 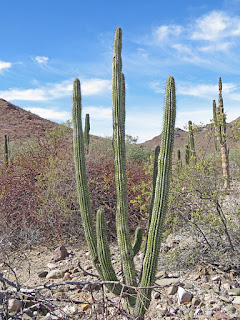 This is a sandmat, formerly in the genus Chamaesyce, but now in the huge, unwieldy genus Euphorbia – Euphorbia leucophylla. 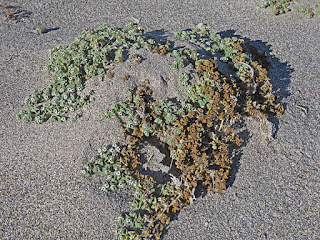 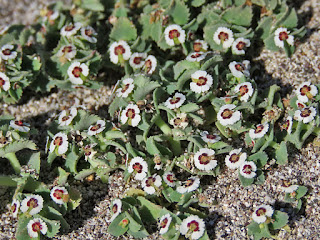 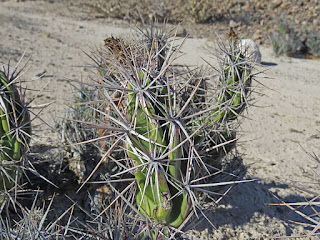 This identity of this red-stemmed beauty has eluded me, but I suspect it’s a Jatropha species. 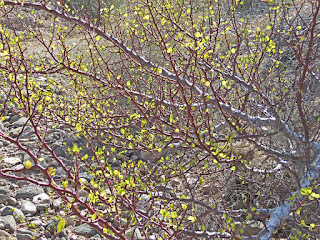 This Jacquemontia eastwoodiana, Island Felt-leaf Morning-glory, was growing in a bush-like form. Later I saw one growing more like a vine up into a tree. 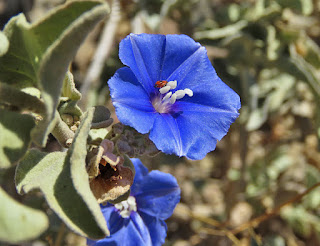 The white trunks of Lysiloma candidum, Palo Blanco, give the woodland along the arroyos a distinctive look. 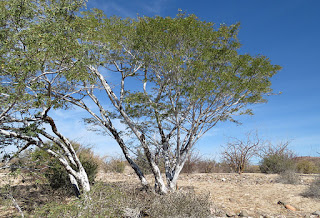 Lunch was next to our hotel, and I had the delicious fried snapper, pargo frito, before we made the long drive north to Puerto San Carlos. 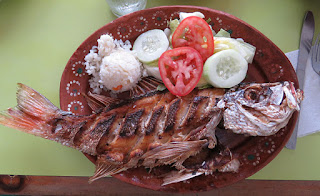