My WINGS tour to Baja California’s Cape Region includes a boat trip on Bahia Magdalena, leaving from Puerto San Carlos west of Ciudad Constitucion. This is about a 4-hour drive from La Paz, and on our way we made a stop in the unique desert of the Magdalena Plain. 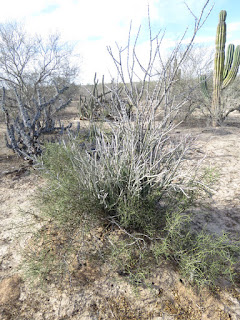 One of the most distinctive features one notices in this type of desert are the lichens growing on everything. Fog is common here at any time of year, though rains are infrequent and unpredictable. 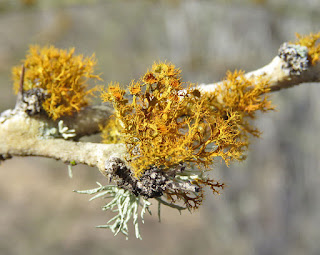 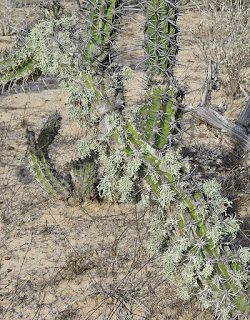 This is Lophocereus schottii, Senita Cactus, which barely makes it into the U.S. at Organpipe Cactus National Monument. 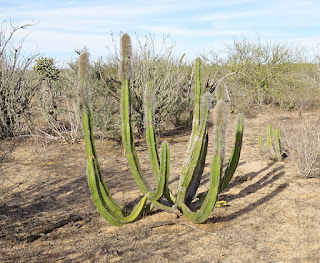 I was especially hoping to find a patch of the cactus Stenocereus eruca, the Creeping Devil, endemic to this particular area. I had seen it a couple years ago on a side road we didn’t have time to check this year, and back then I didn’t realize how local an endemic it is. We couldn’t find it, unfortunately. But the plants, birds, and animals here were good. A pair of Harris's Hawks let us approach quite closely. 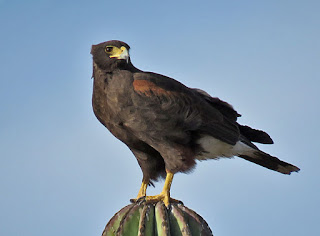 This male Costa's Hummingbird appeared out of nowhere, seemed to choose a perch to check us out for a minute, then zoomed off. 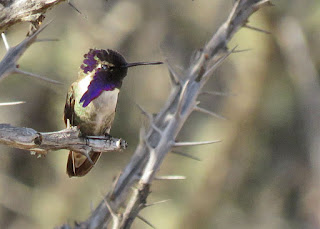 When I saw this lizard run on the sand and hide under a bush, I assumed it had to be the drab local subspecies of Zebra-tailed Lizard, but Brian Eagar explained to me that it’s a female of the extremely variable Uta stansburiana, Side-blotched Lizard – despite the lack of a blotch. 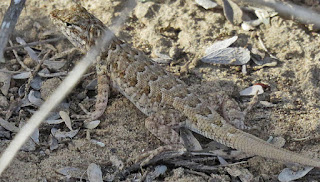 About 15 km before we reached the coastline of Magdalena Bay we started seeing Ospreys on their nests on transmission line pylons as well as on the many platforms erected for them. There is an active nest every few hundred meters after this. I’d be surprised if there were a denser breeding population anywhere else in the world. 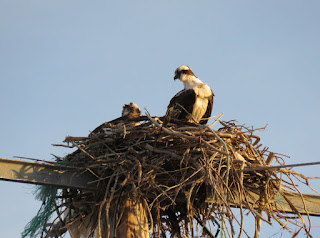 This pond  just before Puerto San Carlos is a roost for many ibises, herons, and egrets, and we watched about 100 birds come in at sunset, including an impressive total of 14 Reddish Egrets. 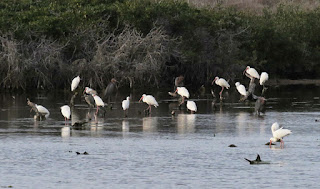 This is also where we finally got good views of this Ridgway's Rail, a recent split from Clapper Rail. The Baja California Sur endemic subspecies here is Rallus obsoletus beldingi, which supposedly looks different or has different measurements from the subspecies in California, Arizona, mainland Mexico. 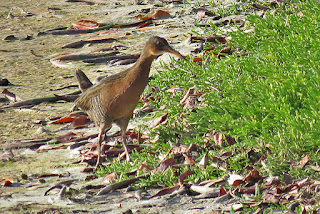 The main purpose of our big detour this far north is to take a whale watching trip on Bahia Magdalena. The day started with thin low-level fog, the first time I’ve seen that here. But it burned off very quickly, and the nearly perfectly still air (one reason for the fog) resulted in a gorgeous, nearly flat and mirror-like sea. 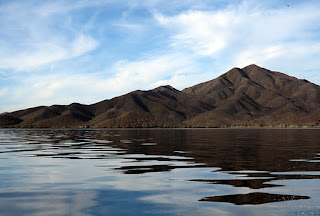 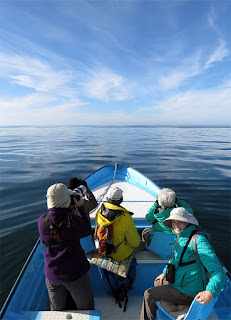 We saw whales – at one point one could scan a 90° swath ahead and see about 15 whale spouts in the distance. As we got closer to the main area of activity, we had very good views of several whales and their flukes: Eschrichtius robustus, the Gray Whale. 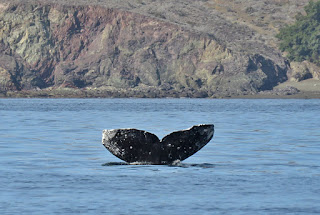 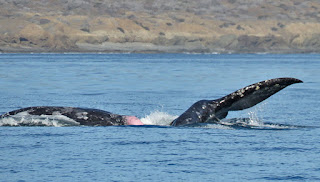 There was some exciting birding too. Before we even got to the whales, I directed José, our pilot to motor towards a group of plunge-diving Brown Pelicans. As we got closer, I noticed several Black-vented Shearwaters amongst the group, the first I have seen in the bay. I quickly made sure my group could see them, then tried getting some photos, vaguely aware that there were some small dolphins in part of the feeding frenzy. To my surprise, I got not only an in-focus photo of one of the shearwaters in flight (not very easy with the Canon PowerShot type cameras), but also an identifiable shot of what turned out to be a Delphinus capensis, Long-beaked Common Dolphin. 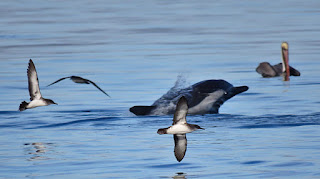 On our way back to port we came across a resting group of Black-vented Shearwaters, allowing excellent views.

Out of nowhere came a Pomarine Jaeger, which briefly chased one of the shearwaters and then quickly vanished to the south. One of my participants got much better photos than this – this is more typical of the kind of photo I can get of a bird in flight with this camera. 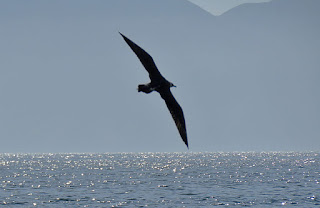 José paused to show us several of these young Urobatis halleri, Round Stingrays, common in the shallower parts of the bay. 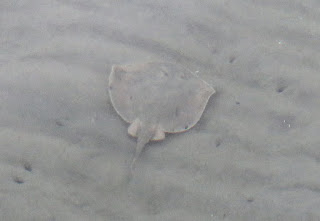