I managed to get out birding twice in the past two days. On Sunday Jennie MacFarland from Tucson Audubon and I volunteered to help Dan Lebbin with the field trip he had organized for the American Bird Conservancy’s board, who had been in Tucson for the past few days for meetings. Since one can’t really be in total control of a group of 35 participants who were there to just have fun, I didn’t even try, and I ended up having a really nice day with some wonderful people. Dan had planned the itinerary with my consultation, but it was his idea to first head to the Sonoita grasslands of Las Cienegas National Conservation Area to look for Baird’s Sparrow. Here is part of the group, elated after our having seen one extremely well. Some of them even got really good photos. 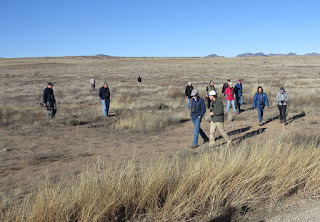 Looking to the west from the Cienegas NCA, one could see Mount Wrightson (elevation 9453 feet) in the Santa Rita Mountains. 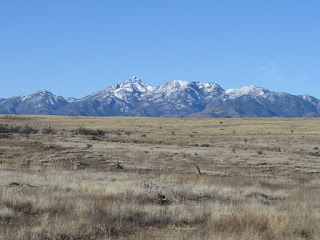 We made stops at the Paton Center in Patagonia, along the Santa Cruz River by Tubac, and at Montosa Canyon, seeing lots of great birds. Montezuma Quail right on the shoulder of busy AZ Highway 82, a Lazuli Bunting at the Paton Center, Lawrence’s Goldfinches at Tubac, and Black-capped Gnatcatchers and two Common Poorwills at Montosa were the highlights. Here is a grainy shot of one of the several Lawrence’s Goldfinches, a truly stunning finch. 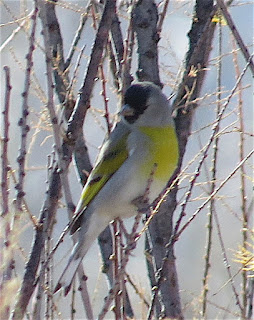 Then yesterday I returned to Montosa Canyon with my friend Greg Corman, a plant person, artist, and an increasingly keen birder. It had been only just over 12 hours since I was here with the ABC group, but it’s one of my favorite places in SE Arizona with lots of side drainages to explore.  I began coming here in 1997, long before it was in any of the bird-finding guides, and it eventually made it to the list of places to visit when I found Black-capped Gnatcatchers here in October 2003, a bird I had predicted to occur here since my first visit. The geology and topography combine to create some wonderful views and fascinating mix of plants. This is looking east up the canyon to Mount Hopkins and one of the Smithsonian’s telescopes in the Whipple Observatory. This is the sister peak, at 8553 feet, of Mount Wrightson. 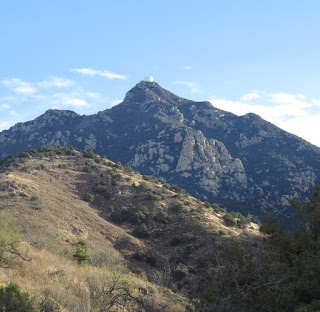 Looking in the opposite direction, between the limestone peaks on the flanks of the Santa Ritas, you can see Baboquivari Peak 40 miles away. 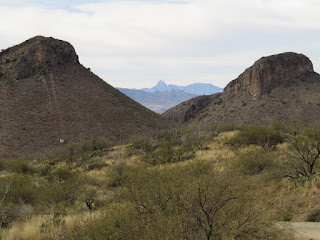 We hiked about a half mile up the canyon from where the road leaves the main drainage and begins to climb up to the observatory. Lush grasses and other plants from the abundant monsoon meant lots of birds. 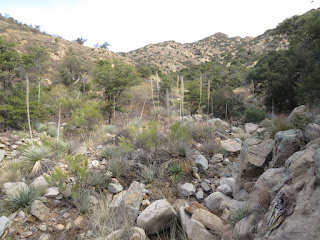 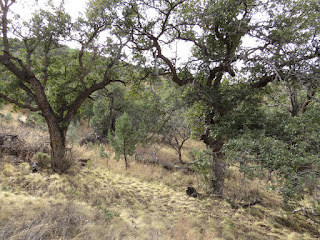 We’ve had several winter rain events as well, putting a small trickle of running water into the main Montosa drainage. 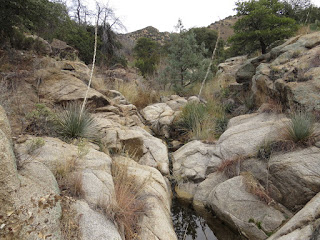 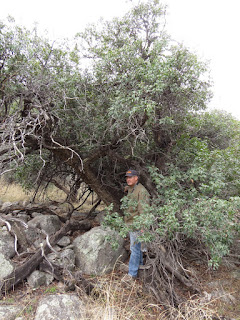 We tallied 42 species here and in the lower part of the canyon. This American Robin was the only one we saw; it’s not a common bird here at any time of year. 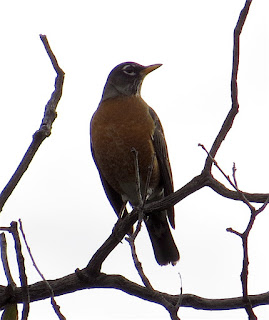 We had lots of Dark-eyed Junco flocks. This is the subspecies Gray-headed Junco, but we also had Pink-sided and Oregon subspecies. 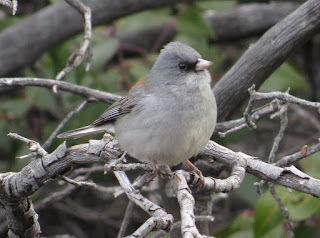 The abundant sumac (three species!) and hackberry fruits means lot of food  for Hermit Thrushes, and our tally of 27 is indeed a lot for a single outing. 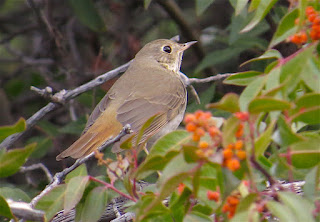 But our best find was this Elegant Trogon, which I predicted we might see. Individuals have been found wintering lower in the canyon in previous winters, but there haven’t been any reports since November, and few people venture this far up the canyon. 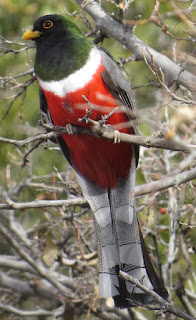 It was surprising to see this Carphochaete bigelovii, Bigelow’s Bristlehead (an unusual composite with no ray flowers and relatively huge disk flowers) in bloom, with a very lush patch of plants bursting with flower buds. The ancient Arizona Flora says it begins blooming in March. 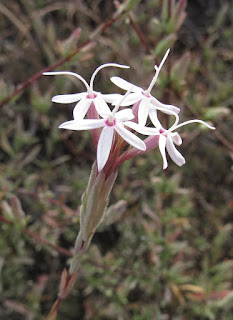 Another nice fruiting shrub in this canyon is the subtropical Condalia correllii, Correll’s Snakewood. Greg has a related species in his yard, C. warnockii, and he says Pyrrhuloxias find it irresistible. Indeed, towards the end of our day I watched one feeding on these fruits. 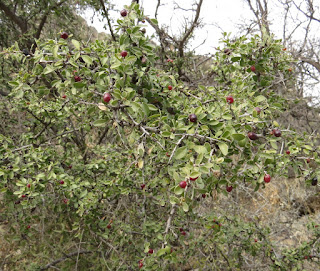 Posted by Birdernaturalist at 11:51 AM