After the countdown dinner for the Atascosa Highlands CBC at Widsom’s Café in Tumacacori, I set out for another night of roadside camping, finding a spot barely 9 ½ miles west of where I had camped last night. This would be my 10th and final Christmas Bird Count this season, on January 3. There are two more days to the CBC season after this, and indeed there is one CBC on each of the remaining two days, but both are hours away in central and eastern Arizona, and the weather forecast is looking very unfavorable, especially at those high elevations. Tonight, here in the southeastern corner of the state, it is calm once again – even calmer than last night – and only in cold pockets of stagnant air is it dipping below freezing. Thank goodness for my new Exped thermal sleeping mat. I am quite cozy and stir only often enough to enjoy the continual hooting Great Horned Owls, tooting Western Screech-Owls, and packs of singing Coyotes.

There are but 2.13 miles separating the nearest boundaries of this CBC circle and the Atascosa Highlands CBC circle to the SE, but it’s amazing how different the two are. This one has no spectacular canyons, mountain cliffs, shady draws, or southward-draining watersheds. All we have to deal with here are low rolling foothills and broad valleys. As a result, there are no Whiskered Screech-Owls in this circle, and I hear only the same two species during my two hours of owling that I’ve been hearing all night. But both are calling everywhere, and I end up the morning with 11 Great Horned Owls on my list; at one point I carefully counted six separate individuals audible from one spot.

Dawn was a flurry of sparrow and towhee chipping and squeaking, but I was able to tease out several species by their call notes, as well as Bewick’s Wrens, Verdins, and Crissal Thrasher. I heard what I was pretty sure were call notes of Cassin’s Sparrow, and some playing of the song indeed resulted in some very aggressive responses. Throughout the day I would try the same just by guessing at the habitat and almost always received a response. This individual ended up being the first of an amazing 17 Cassin’s Sparrows that I would tally today. 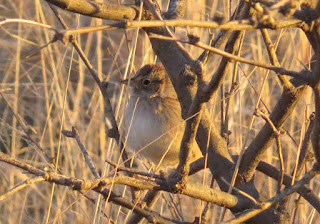 I then birded some by car along the Tres Bellotas road south of Arivaca, and on one of my first stops had a pair of Hepatic Tanagers. There are just barely enough oaks in this area to make this almost an expected rarity for here, but these turn out to be the first ever in 30 years of this CBC’s existence. I got a good shot of the male. 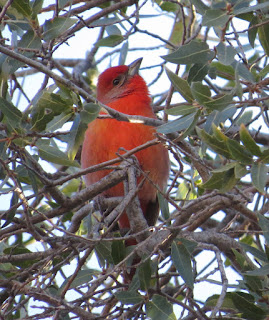 I’m helping to cover the only part of the circle that has any oaks, and the patches are sparse, but just enough for some of the oak specialists such as Bushtit and Bridled Titmouse. 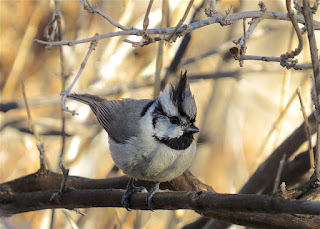 Another oak specialist that is missable on this CBC is the Hutton’s Vireo. I have no doubt that this unusual species is a mimic Ruby-crowned Kinglet. 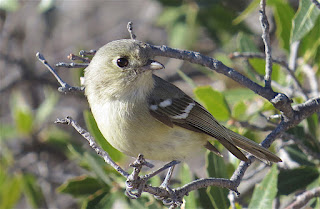 Here is a Ruby-crowned Kinglet that responded unusually aggressively to my pishing and owl imitations. In fact these three photos were successive shots as I held the camera’s shutter button down, which takes about 3 photos per second. They never sit still, and it’s amazing I was able to get it in the frame and in the right focal plane. To compare it with the vireo, notice the thin bill, thin legs, golden toes and black legs (rather than all bluish gray), the stronger lower pale wing bar (not two evenly bright wing bars), and the additional dark bar on the primaries. But the overall color, size, shape, and especially that eyering broken at the top are uncannily similar. 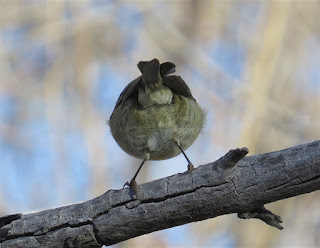 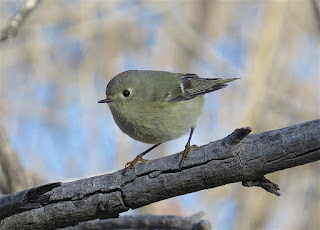 This Black Phoebe responded to one of my mobbing sessions. 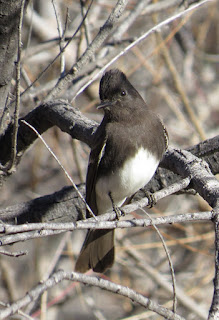 With 271 individuals tallied, Chipping Sparrow was the most abundant species on my route today. 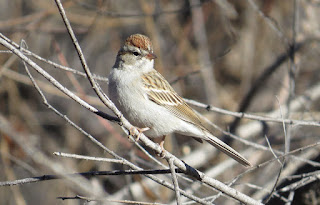 I had only a few Black-chinned Sparrows, a bird usually missed on this CBC. 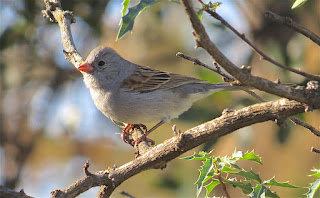 A Rock Wren was a slightly odd sight on the tip of a tree. 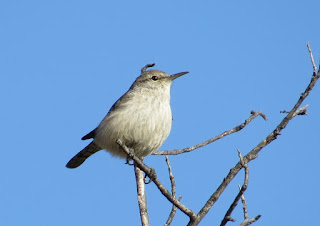 After birding by car for a few hours, I reached the limit of my rental car’s clearance and hiked down upper San Luis Wash for about 3 ½ miles, returning by the road. It was mostly desert grassland with a good diversity of shrubs and trees close to the riparian area. 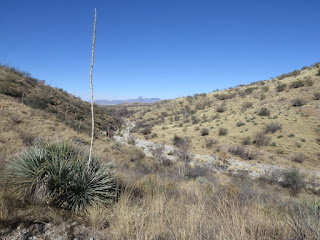 Activity of honeybees brought me to inspect this apparently lifeless shrub. 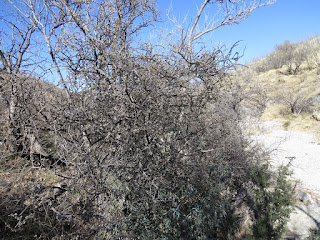 It was in fact in full bloom – Forestiera shrevei, Desert Olive. It’s in the family Oleaceae, the same as olive, ash (Fraxinus), and lilac. 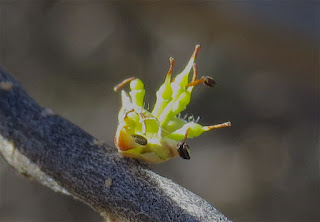 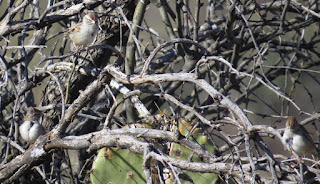 I had a few Pyrrhuloxias and Northern Cardinals in the riparian thickets. 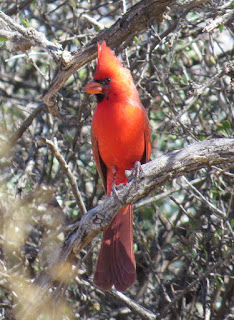 There was one stretch of the wash were taller hackberry-mesquite-acacia woodland extended some 50 yards either side of the main channel in a more subtropical fashion. 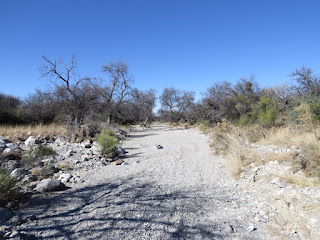 And indeed here I discovered a pair of Black-capped Gnatcatchers, the first ever for this CBC. 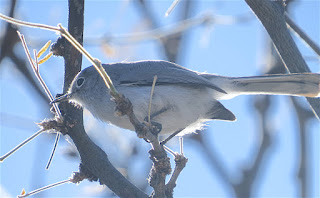 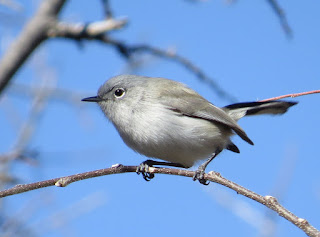 The Netleaf Hackberries in this woodland were a food source for a lot of birds, including this Crissal Thrasher. They had obviously been quite fecund in the previous breeding season or two, as I tallied 26 this day. 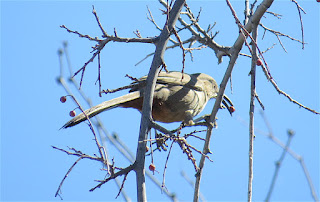 On my way back to the car, I walked through more upland mesquite desert scrub, but I continued to hear and flush pairs and groups of Rufous-winged Sparrows here. But the more open habitat was preferred by Black-throated Sparrows. Any other year in the past 150 years this species would have outnumbered Rufous-wingeds, but today I found only 44. 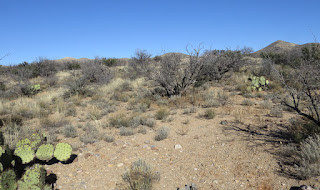 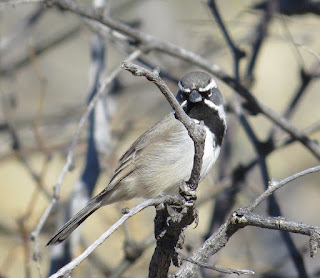 Bewick’s Wrens had a spectacular breeding year, and I found 50, well over the averge number this count gets from all group. Cactus Wrens were not so abundant; I found only 11.

My last new bird of the day was this gorgeous black morph Red-tailed Hawk, species #56. 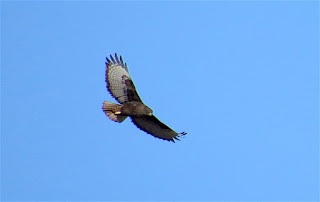