SE Peru From the Field Report 2

The latter half of our SE Peru tour saw us boating for seven delightful hours down the Upper Madre de Dios from the uppermost port of Atalaya hours to the Manu Wildlife Center. For some, this relaxing ride in the hands of our skilled boatmen Horacio and Luis was a highlight of the tour. Along the way we saw several Fasciated Tiger-Herons, unexpected Sungrebes (usually in shady, calm waters; not on big open rivers), and many others. One of the more surprising birds was a migrant American Golden-Plover on the rocky shore. 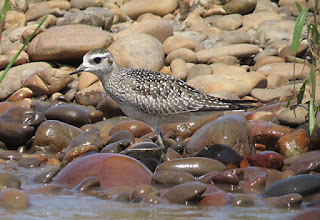 Our five days and six nights at the fabulous ecolodge of Manu Wildlife Center flew by. Our visit to the clay lick on a cloudy, rain-threatening morning was a bit odd, as the usual hoards of parrots and parakeets only made brief appearances in the trees overhead before flying off. But the Red-and-green Macaws gathered gradually and descended for a spectacular show of well over a hundred noisy, feathered bundles of primary colors. 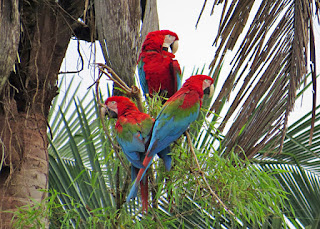 Two more of the tour’s most enjoyable outings were also by boat, these on a quiet floating platform as we were peacefully paddled around oxbow lakes by Horacio and Luis. On one we had the local and rare Pale-eyed Blackbird and Great-billed Seed-Finch, and an abundance of Purus Jacamars. 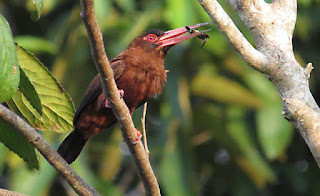 On the other boat ride we came close to a heard-only Paint-billed Crake, finally caught up with Lesser Kiskadee, and had amazing views of a Green-and-rufous Kingfisher. 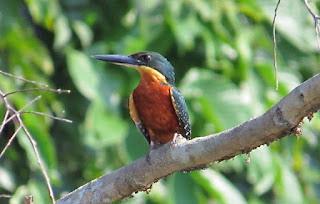 Then there were the trails at Manu Wildlife Center, which revealed many treasures as we walked them slowly. An army ant swarm had a several birds, the most conspicuous of which was a pair of Black-spotted Bare-eyes. Gilded Barbet popped in a few times for excellent views, and a pair of Bat Falcons announced their presence from an exposed dead tree in the middle of the forest. Absolute trip highlights for some were a Cream-colored Woodpecker forage quietly very low over the trail, a pair of Red-necked Woodpeckers doing the same and completely unconcerned with our presence, and a very seldom encountered Collared Puffbird that conveniently chose a perch we could see from the trail. 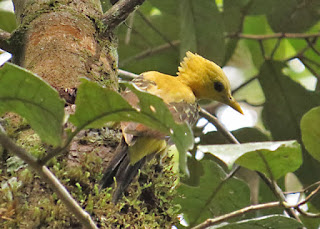 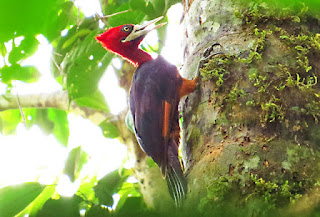 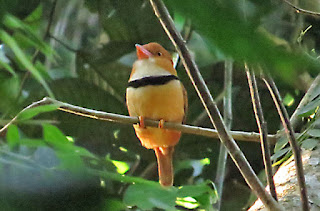 The canopy platform revealed several treasures of the treetops that we would have never seen from the trails below. Peruvian Spider Monkeys lounging in distant tree tops, Ivory-billed Aracaris hopping around in the canopy, and tanager flocks at and below eye level are just some examples. Most memorable was a pair of Blue Dacnis just feet away, glowing in the morning sunlight, and electric Paradise Tanagers in the same tree were hard to forget. 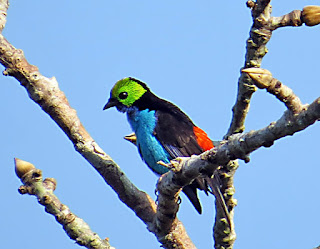 Even the gardens around our cabins were worth watching, with the porterweed hosting a White-chinned Sapphire, Sapphire-spangled Emeralds, a Reddish Hermit, and a male Festive Coquette, providing wonderful viewing opportunities. 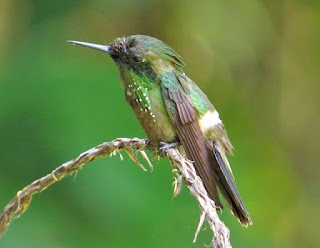 A rainy morning during our short layover in Puerto Maldonado was a welcome relief from what has been an amazingly hot and dry tour. It was 101°F during our boat ride to Puerto Maldonado, and it was typically humid, making the heat index 112°F. Just before the rain began, we saw the local White-throated Jacamars, and when the rain stopped, birds came out in abundance, including a rare Tiny Hawk and the very local Scaled Pigeon. 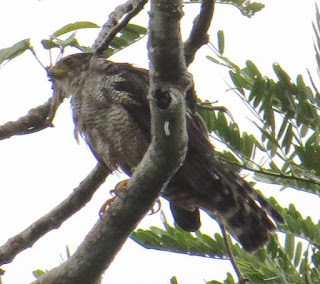 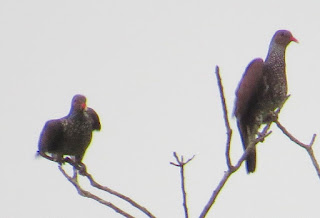 We finished at the incomparable Machu Picchu with Vilma, a wonderful guide who clearly takes pride and interest in the story of this wonder. She can also take a mean group photo. 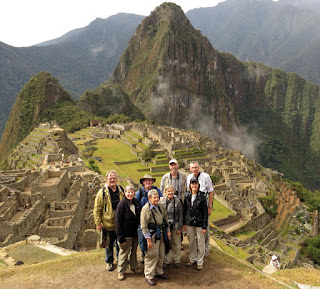 We also had some excellent and memorable birding here at Machu Picchu. A Collared Inca looking almost more like a glittering jacamar was a most stunning specimen, and a pair of Inca Wrens duetting and showing off their beautiful plumage were unforgettable. We walked along the tracks to find the charming White-capped Dipper, and a female Torrent Duck dipped into the river several times at very close range, eventually resting on a rock just below us to re-waterproof her plumage. 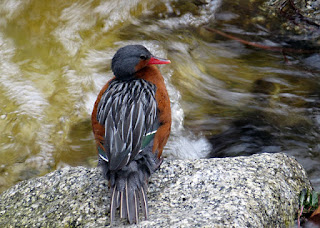 Posted by Birdernaturalist at 9:26 AM