Sycamore Canyon in the Patagonia Mountains

I’m almost to Peru, where I’ll leading my WINGS tour in the states of San Martín and Amazonas. Some really cool birds are waiting for us, and I’ll take a break boning up on their call notes in order to share a few photos from the only birding I did in the past week.

Last Wednesday I joined my friends Ken and Laurel from Fairbanks (we were all birders in Corvallis when I was in college). Only after they arrived at my place did we decide on where to go, and since they had not managed to find any Spotted Owls in the still very cold and icy canyons in the Huachucas on their own, I thought it would be fun to see the area where one I saw on the Patagonia Christmas Bird Count five weeks earlier. It wasn’t in the same tree, but it was nearby. Ken walked right under it before I spotted it. 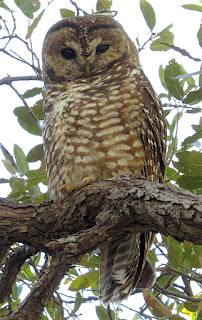 The grassy, open oak woodlands here is ideal habitat for Montezuma Quail, but we didn’t find any today. But like five weeks ago there were still lots of flocks of Chipping Sparrows and Dark-eyed Juncos, and we spotted to Black-throated Gray Warblers among them. In one of them I spotted a rare Slate-colored Junco, the only one I’ve seen this winter. 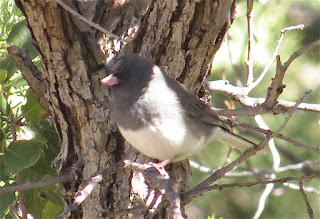 This would be a wonderful bird quiz photo, and I know some people who could probably figure it out. But I saw it well, and it called at the time, and can confirm it as a Hammond’s Flycatcher. The wingbars are too broad even for a Hutton’s Vireo, and to tell it from Dusky Flycatcher, the length and spacing of the primary tips as they project beyond the tertials is important. 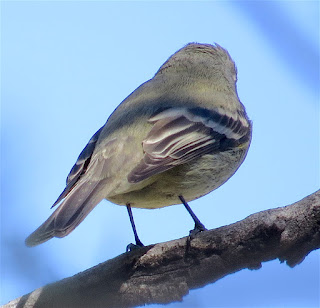 We saw two Golden Eagles soaring and flying around repeatedly during our hike. 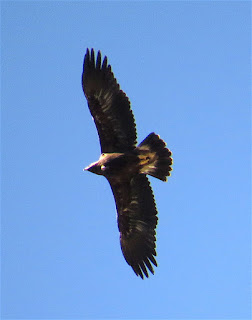 I was surprised to find an active grasshopper on this chilly date. It was actually quite small and it was remarkable how it flushed from the grasses to retreat into the lower branches of an Alligator Juniper. If my submission to Bugguide get labeled, I’ll try to remember to update it here.
2/21/16: I've just received notification from Buggide that David Ferguson has identified this as Aidemona azteca, the Aztec Spur-throat. It is one of only six species of grasshopper that have been posted from the month of January in Arizona. 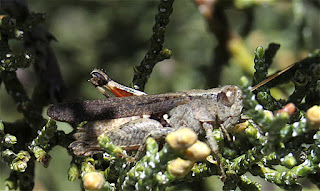 Here’s a zoomed in view of the Atascosa Mountains 25 miles to the west. 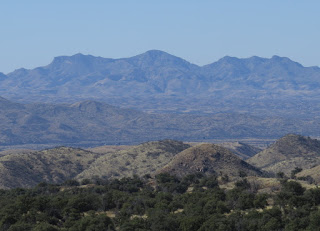 Posted by Birdernaturalist at 4:53 AM