Today we had all day in the cloud forest and adjacent drier scrub of the slightly isolated mountains known as the Serrania de Siberia, containing the last high peaks and elfin woodland in this arm of the Andes, and therefore home to many species of northern and central Andean birds at the southern tip of their range.

I didn’t take to many photos, but it was a very good day for birds, even though we had work for them with brutal wind all day. Few draws seemed to have any shelter from it at all. Better than fog or heavy rain, but it sure made it hard to hear, and it appeared to keep mixed flock activity low. We left the hotel very early and drove an hour or so on a bumpy gravel road, which was formerly known as the Pan American Highway until a new paved highway was built to the north a couple decades ago. We then walked down a side road right at dawn and instantly had a flurry of activity that included Tawny-rumped Tyrannulet, Chestnut-breasted Mountain-Tanager, Red-crested Cotinga, and several other birds that were lifers for all of the participants.

We also saw our second tapaculo of the tour, the very furtive and usually invisible Trilling Tapaculo. I’ve heard dozens of them (maybe even a hundred), but I’ve only ever seen 3 or 4. It takes patience, and we gave the first one we heard a good 10 minutes before we eventually gave up. But farther down the road another was calling in a much more favorable spot. My personal preference is to spend time looking at birds, even common ones, rather than trying to coax just one into view. Besides, it’s just like a gray mouse with a little bit of brown barring on the flanks, and it’s the song that is so distinctive. Still, I had more than enough patience for another sneaky tapaculo to give it at least 10 more minutes. But in the process I found my absolute limit of patience with one of the participants, who misbehaved by moving conspicuously (and not for the first time) without an ounce of contrition or apology, and instead snarled at me while threatening to scare off the tapaculo, which all of the other participants were actually quite eager to see. Miraculously the tapaculo reappeared repeatedly, though very briefly each time, but enough times that everyone had a pretty good view of it. After the tense moment, the client was again unpleasant to me, and that’s when I really lost my cool for the first time ever on a tour. So that’s where my button is! When I say “don’t move” for the umpteenth time, what I actually mean is "don’t fucking move," and if you do move, say “oops, I’m sorry, I forgot” and don’t snarl at me like I was the one who did something wrong. I might just completely forget where I am and fly off the handle in front of everyone.

We found a cooperative Giant Antshrike down one side road after lunch. Later, one of the best birds of the day was the endemic Rufous-faced Antpitta, which we had heard a few times before finally seeing one perched in a very dense bush right below the road. We could see it only by crouching and peering though one little hole to see it perched only a couple feet away. Another fun sighting was of a flock of about 15-20 Pale-footed Swallows which had found the only wind-sheltered 50-meter stretch of road and circled back and forth over and between us at times. It was the best view I’d ever had of them. One of the few birds I actually photographed today was this immature Mountain Caracara that flushed from the roadside. 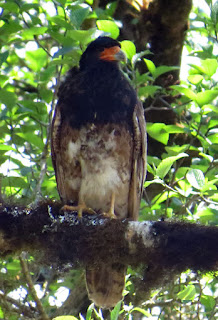 Plants here are fabulous. This Barnadesia sp. is unusual among composites in forming a tube-like shape to attract pollinating hummingbirds. 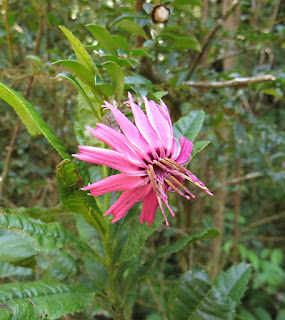 We returned to Comarapa with stops in the drier, lower slopes, which revealed few birds in the gusty winds. Thanks to a tip from our driver, we found a responsive Olive-crowned Crescentchest and had amazing views of it. Here is a view of Comarapa in the valley (above and right of center) before we descended the final kilometers back to town. 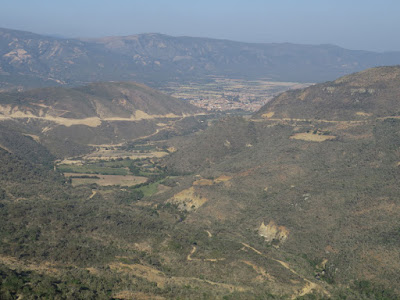 Posted by Birdernaturalist at 9:12 AM