For my last day of leading field trips for the GBNA meeting in Chiapas, I was assigned to take my group for Rose-bellied Bunting (that’s the official AOU name; many people prefer Rosita’s Bunting, but I think that follows the traditional, sexist practice in old-school ornithology of using a woman’s first name rather than her last name) and Giant Wren, two local endemics in the region.

Rose-bellied Bunting is surprisingly common in the humid patch of forest on the pacific-facing slope of the middle elevations of the Isthmus of Tehuantepec. Inland from here (north, in this case), the forest is too wet, tall, and tropical. Lower down towards the coast the forest is too dry. East and west on the Pacific slope at this same elevation, the inland mountains are much taller and the land mass much broader, blocking the moist Gulf of Mexico airflow, resulting in forests that are also much drier and thornier, not what this species needs. After Yellow-green Vireo, it was the most common bird here, and it was nice to be able to see birds without using playback. 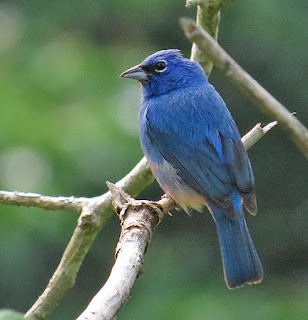 I thought that seeing this male grab and then eat a green stick insect was pretty unusual (a blurry photo in the limited very early morning light), but it turns out that the previous day’s field trip led by Michael Retter saw the same thing. 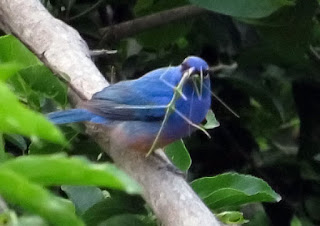 Orange-breasted Bunting is also common on this stretch of road above Arriaga, but it prefers to be down lower where the forest is drier; there are a few kilometers where both buntings occur together. 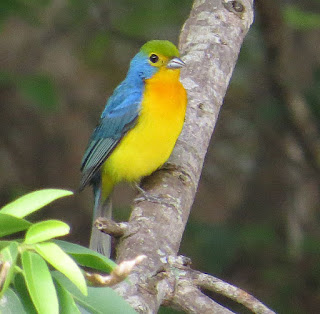 The rest of our day was spent on the flat, sparsely-wooded coastal plain of Chiapas. Here we found what Steve Howell has named “Ridgway's Flycatcher,” long considered a well-marked subspecies of Nutting’s Flycatcher (at least in the museum tray), but shown by him to have a clearly distinct set of vocalizations (more like Panama Flycatcher, actually) and habitat, and occurring with just a few miles of typical Nutting’s Flycatchers. The AOU committee on taxonomy and nomenclature did not accept the suggested split, mostly because none of them have personal experience with these birds and don’t spend enough time getting to know them in the field. While it’s true that a scientific paper showing the consistent differences would be good to have, I have little doubt that if the committee members had had extensive field experience with these birds, they’d all recognize that this split is a total no-brainer and that they’d see a peer-reviewed paper to be unnecessary. 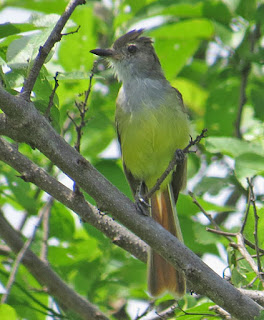 The very local but common Giant Wren was our main target, and while we easily saw just this one family group, we heard at least three others in different directions at the same time. 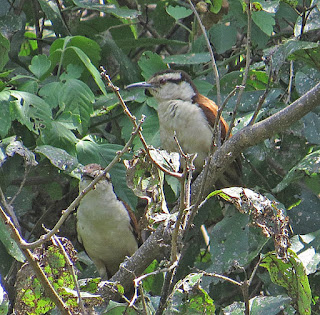 Their chortling duet or chorus is quite amusing. This recording is from my first visit to this area almost 10 years ago.

We had a pair of Citreoline Trogons in the same location. 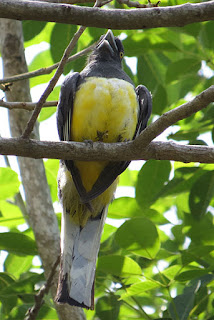 Being flat and near the coast, this area is also relatively wet, with many ponds, channels, and mangroves. This pond had Northern Jacana, Black-bellied Whistling-Duck, and Bare-throated Tiger-Heron. 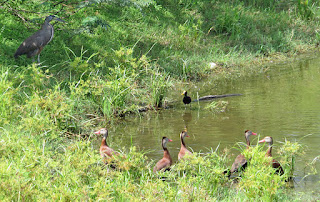 A close-up of a Northern Jacana, showing its long toes. 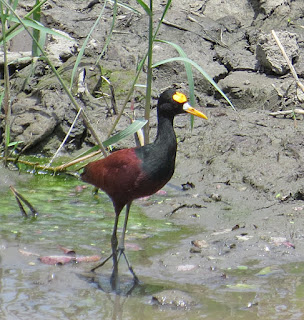 We had a great auditory experience with two Ruddy-breasted Seedeaters countersinging from opposite sides of the road at very close range. One was an adult male, the other a young male in a female-like plumage.

Then rather have our third lunch of rather boring tamales and juice from the back of a bus in the hot sun, I made the suggestion of sitting down in a palapa on the beach to have a cold beer or soft drink, and everyone was on board with that. 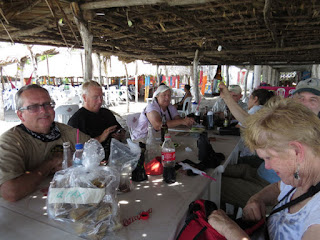 In fact, everyone ordered from the menu, with shrimp and fish being popular. I ordered fish tacos, even though it was not on the menu. But it turns out that the Isthmus of Tehuantepec is not only a biogeographical barrier, but also a culinary one. This is what they brought me; even our driver, originally from Mazatlan, laughed at how ridiculous they were. 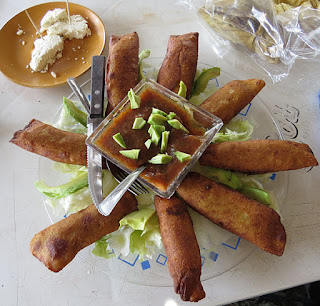 It was refreshing to just sit in the ocean breeze, but some people, like Kristie, just couldn’t sit still until she got wet. 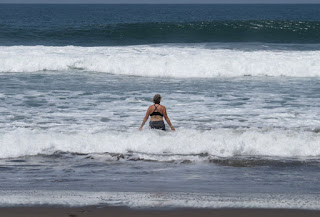 This Willet walked by as we were having lunch. 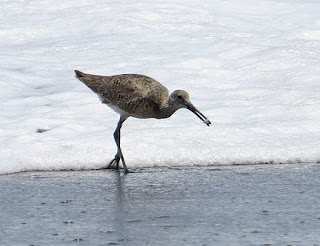 Next blogs will be from Brazil!
Posted by Birdernaturalist at 5:45 AM