The eight days at Viruá National Park with my client-friend Susanne whizzed by in a flash. Each day was full of very cool sightings, and I continued to learn bit-by-bit about the mushrooms. As I expected, internet was not reliable there. As it turned out, I was able to connect using advanced secure web proxy settings provided by the staff there, but it still gave me only rare access to anything other than Facebook, and even then it would often prompt me for the user name and password on the average of once every two seconds. So I didn’t try that often.

I have many great photos of so many cool birds, bugs, plants, and other things, but maybe the most unexpected and delightful discovery was of Gray-legged Tinamous, the first for the park and the state of Roraima. I heard this bird very distant one day and shrugged it off as too far to really tell what I was hearing. But the next day it was much closer, and it was very clear that I was hearing a tinamou that was unlike any I had ever heard. It wasn’t any tinamou on the list of park, the only one of which I didn’t already know was Red-legged Tinamou, a bird I was hoping to at least hear. But I had a recording of that species in my iTunes library, and it wasn’t even close. Luckily, three things coincided: it was easy for me to mimic the whistle, the understory of the forest in this location was relatively open, and the bird was uncommonly responsive. I recited the visual marks as it approached within a few meters and I recorded its song; the grayish blue legs were the first thing I mentioned, as I was really hoping to see red legs. I managed some blurry photos in the dark understory. 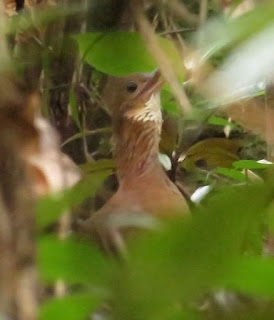 A look in the field guide from van Perlo quickly led me to Gray-legged Tinamou as the only match, as the description of the voice was pretty conclusive. But with my iTunes library having over 29,000 recordings of bird voices representing more than half of the world’s 10,000 species, I had no example of the ultra-local and little-known Gray-legged Tinamou. So my guess was still tentative until Facebook communications with my friends Alex Lees and Andrew Spencer confirmed the identity of my recording as that species. We eventually heard two others, seeing one of them well, and getting a really nice recording of one, which I’ve uploaded here to xeno-canto.


This area is still not that well known, as birders first began to explore here only in 2001. But a major paper was published just last year with 14 authors providing a comprehensive bird list from the national park and adjacent areas, and no mention was made of this species. But there are three other species that I detected that would be new for national park, though not as well documented, and maybe better left for future visits. One was Orange-breasted Falcon, a calling bird that flew over the forest with something in its talons, a second was a probable Rufous-winged Ground-Cuckoo that I heard only by bill snaps on our last morning, and the third would be one of the larger, browner Chaetura swifts that are all but impossible to identify in the field. (Probably Chapman’s Swift, but who really knows the true distribution and seasonal movements of Sick’s and Amazonian, not to mention Chimney, which surely also occurs here but not this time of year?)

Yesterday, Susanne and I flew from Boa Vista to Brasilia, where we said our farewells, and I continued on to Cuiabá (and she on to São Paulo), where I have two full days to try to catch up with photo sorting, labeling, and uploading; emails; and preparing for my upcoming tour in the state of Mato Grosso. Americans unfamiliar with Brazil might not appreciate the size of this country and the huge differences in landscape and climate in the distances we covered. My flights yesterday, for example were roughly the distance equivalent of flying from Tucson to Chicago and from there to New York City – but keep in mind that we crossed the equator, traveling from the middle of the rainy season to the end of the dry season. 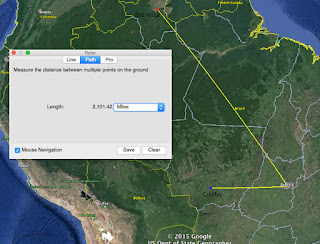 Here’s a view looking westward as we passed over the Amazon River about 150 miles downstream from Manaus, where the Rio Uatumã and the Amazon combine to form a waterway about 20 miles wide. 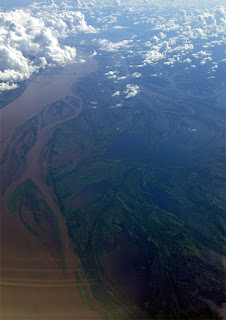 Posted by Birdernaturalist at 11:28 AM