On my fourth day of leading field trips here, I did the nearby Sumidero Canyon, allowing me to sleep in a couple more hours. The nearly sheer faces of the canyon down to the Grijalva River reservoir offers one of the most impressive geologic vistas I’ve ever seen. 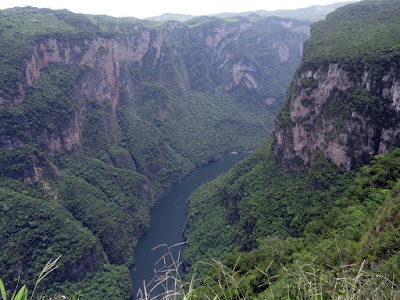 The birding here is interesting, with some dry forest and humid forest things, as well as some local specialties, such as this Bar-winged Oriole, the only one we saw. 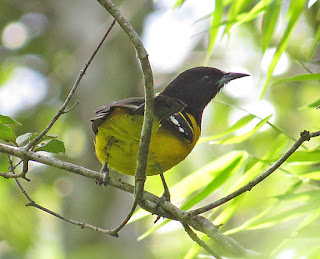 A very scarce and local bird in Mexico is the Blue Seedeater, and this singing bird was in the same place where Michael had it yesterday. 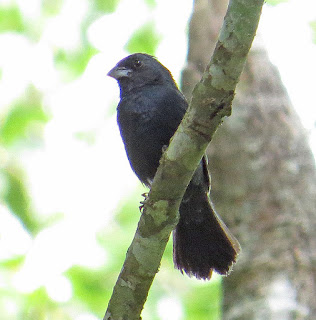 Yet another specialty here is the odd but pretty Belted Flycatcher. 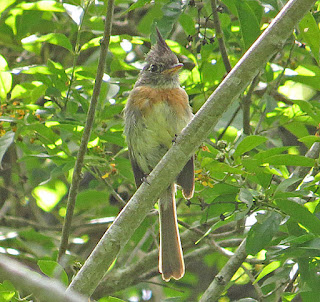 There are lots of orioles here, the favored host of Bronzed Cowbird, so one sees them all along the road. 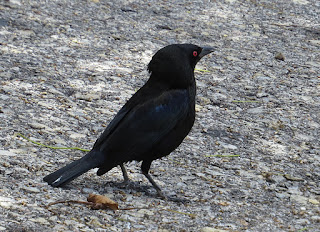 At our last stop a lively Canivet's Emerald came in to my Ferruginous Pygmy-Owl imitations. 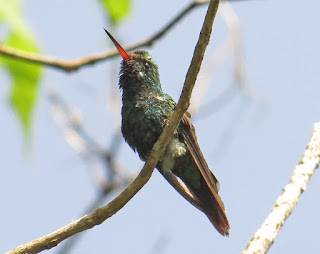 We saw lots of other cool things. This wooly caterpillar will eventually become a probably drab moth. 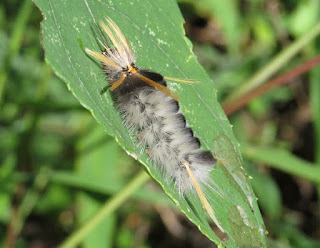 This tiny black metalmark was one of about seven that were only briefly landing on the upper leaves of a small tree, then taking off and chasing around others, sometimes all together in a whirring ball of energy. When they landed, they opened the wings flat to grab the morning sunlight, and this is all we saw; they matched nothing in the field guide. 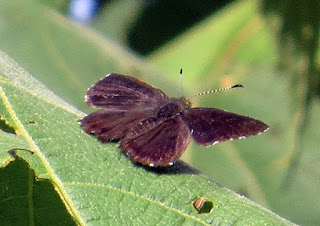 So I sent the photo to Jim Brock who recognized it as a Sarota, and he reminded me we had seem some do this at Cristalino Jungle Lodge seven years ago. The vast majority of the time they are encountered, they perch on lower vegetation with their wings closed and look like this, my photo of Sarota myrtea, White-cheeked Jewelmark from SE Peru. 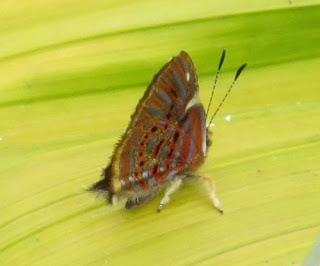 One of the participants spotted this stunning green grasshopper at the canyon vista, a nymph of the very diverse genus Melanoplus. Thanks to my contact Ricardo Marño-Pérez for the ID. 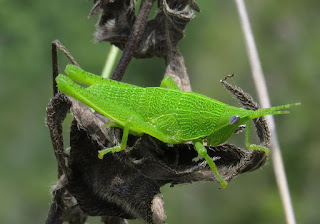 Also at the canyon vista was this Chlosyne theona, Theona Checkerspot. 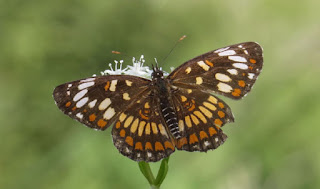 What looked like a scar on a tree trunk turned out to be a group of roosting 15-cm long morpho caterpillars – perhaps White Morphos. During the night they climb to the canopy to feed on foliage, then retreat before sunrise to avoid birds that prey on them. 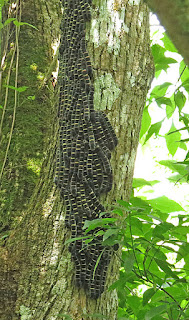 This leaf-mimic katydid with a horn on its head is reminiscent of the genus Copiphora, but the flattened legs and odd behavior suggests it might be something different. While slowly walking it swayed to and fro, much like an American Woodcock. This is surely a tactic to avoid notice by a bird, such as a trogon, who might take it for a swaying leaf. 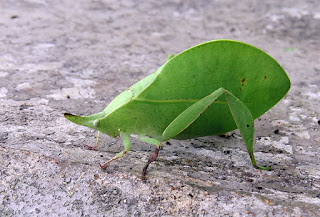 On a later afternoon stop we encountered the mother of all puddle parties. I estimated 20 species of butterfly in this one group.

Most of them were Chlosyne erodyle, the Guatemalan Patch or Erodyle Checkerspot, like the one in the lower left, but I got only a couple photos of those I didn’t recognize right away. This unusual medium-sized satyr is Taygetina kerea, Kerea Satyr. 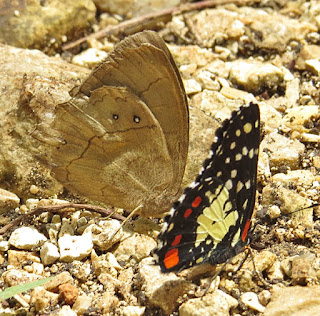 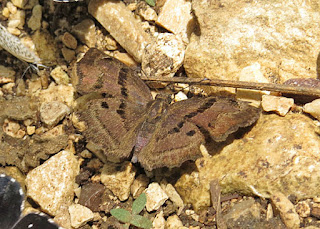 It’s been a pretty good trip for orchids. Thanks to my contact Gerardo Salazar, who is working on a book of orchids of Mexico, I now know this as Dichromanthus cinnabarinus. It looks very similar to a couple other unrelated orchid genera that have independently evolved to attract hummingbirds as pollinators (such as this Sacoila lanceolata), which we know thanks to an amazing research paper that looked into the genetics by Gerardo and others. 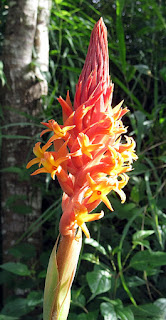 Gerardo also identified this orchid as a rarely seen Triphora debilis, which was growing right in one of the trails. Even Gerardo has never seen one live, and the university museum where he works at UNAM even lacks a specimen! 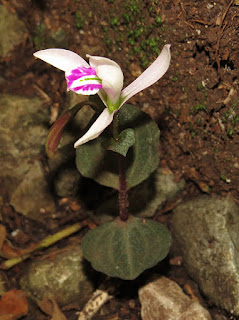 By the way, Eric, who led the Tapalapa field trip today, came back with a report of as many as six Mountain Elaenias.
Posted by Birdernaturalist at 2:52 PM