How Many Jaguars Have I Seen?

After having seen three jaguars earlier this month and two today, I got to wondering how many different individuals I’ve seen since I first did this boat trip with Doug Futuyma in June 2012.

I cropped out the face of every one I had photos of and compared them over and over. Turns out the answer is ten. Virtually every sighting has been a different individual; the only repeat sightings I’ve had were twice where we saw the same animal in the morning as in the afternoon (such as today) and last month when we saw Ruth on two consecutive afternoons. There are two more animals I’ve photographed without getting a good frontal view, so these could be repeats or two more new ones.

Paul Donahue was kind enough to analyze my photos and provide names for them.

Fabrice also looked carefully at his photos from the first animal this morning and determined that it was Mick, one that I hadn’t seen in almost two years. 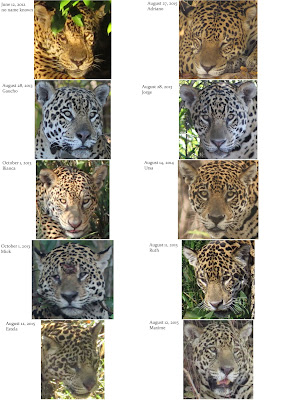 Posted by Birdernaturalist at 9:38 AM