This morning we split into two groups again, with my group going to Serra I, the granite dome on the east bank of the Cristalino River about 2 ½ kilometers upstream from the lodge. Fabrice’s group went to Tower I.

The habitat on the Serra, as I mentioned yesterday, is more like forests farther east and south, which have a more pronounced dry season. We’re at the end of the dry season now, so things here are about as deciduated as they get. It creates a very different feel from the surrounding jungle of broadleaf evergreen forest. 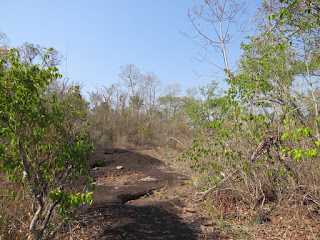 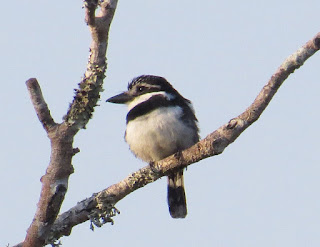 The Common Potoo from two weeks ago was still here; the lack of any visible chick makes me wonder if this is just a favored day roost rather than a nest, but if it had only just started to incubate when I last saw it, there could still be just an egg about to hatch or a chick to small to see. 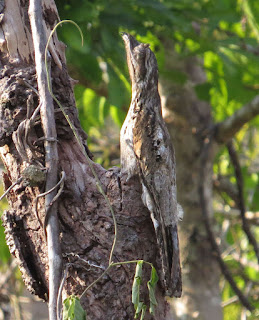 This is probably only the second Hamadryas chloe, Forest Cracker, that I have seen at Cristalino. 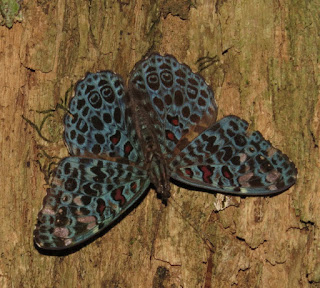 This Lasaia agesilas, Black-patched Metalmark or Shining-blue Lasaia, was on one of the participant’s arms as we were trying to tease apart of mixed flock of birds towards the end of our hike. 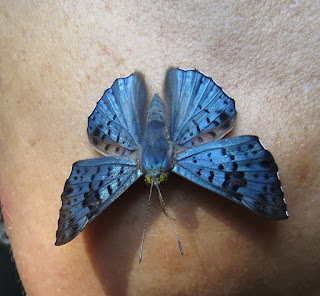 As we arrived back at the lodge before lunch this pretty arctiine moth was nectaring in the same flower cluster (Terminalia?) as the Periander Metalmark from yesterday. 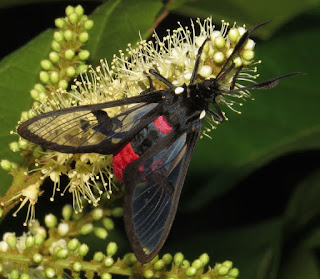 Back at the lodge, an update on the Palm Tanager: Graça, the senior housekeeper found the bird two days ago under the bushes, thought it needed help, and took it to one of the local guides, Douglas. I found Douglas with the bird by our rooms, and after filling it with banana and papaya, he was trying to put it up in one of the trees. I suggested that it was a lost cause, that it would either survive with the parents help or die, and that he leave it under the bush. Well, it’s still alive and well, and being fed frequently by the parents who heed its annoying (to me) begging calls. It had been on the ground under these palm trees the past day and a half. 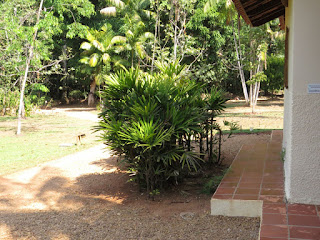 But today it looks like someone picked it up (perhaps Graça) and placed it in this used Silver-beaked Tanager nest (which fledged a family during my last tour) in the same shrubby palms. 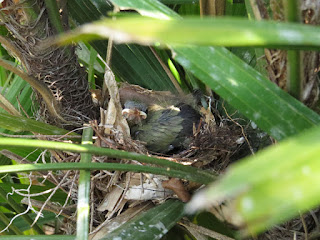 Here’s of of the parents trying to keep cool in the 98°F heat (it’s 106°F in Alta Floresta today, much cooler here in the cover of rain forest and near a river, but still a crazy heat wave for here). 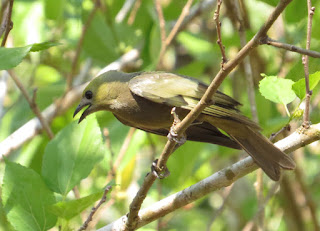 A grasshopper in the subfamily Romaleinae was on a trail not far from the lodge in the early afternoon. 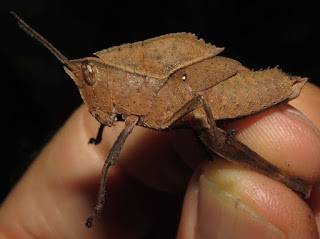 We took a short night walk down a trail from the common area after dinner, and one highlight was this very small tarantula, a male. 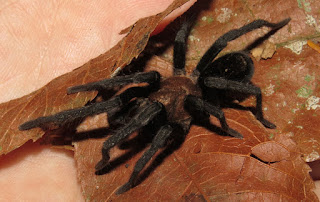 And another spider in the family Ctenidae, but not one of the dangerously venomous true wandering spiders in the genus Phoneutria; perhaps this one is a Cupiennius sp. 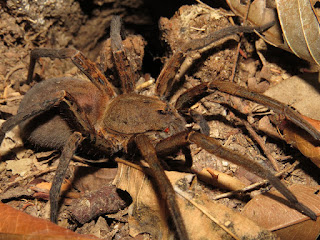 At the moth sheet was this stunning arctiine tiger moth Gorgonidia sp. 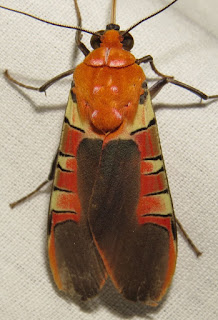 And one of the few longhorn beetles I saw on this trip was on the moth sheet. I haven’t even tried to get this one to genus. 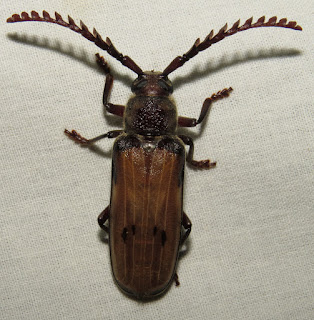 Posted by Birdernaturalist at 9:03 AM