Today we had a long drive all the way back to Cuiabá for our farewell dinner and flights home tomorrow. But it’s not so long that we didn’t have time for some birding. We were actually supposed to have an even more relaxed day, with afternoon birding at Pouso Alegre and even a night drive, with flights home tomorrow afternoon. But less than two weeks ago, Gol canceled that afternoon flight and automatically booked everyone on an early morning flight. We would have to leave Pouso Alegre at 2:00 a.m. to be on time for that one, but WINGS and our ground agent were able to change things around last minute so that we’re in a hotel only a 6-minute walk from the Cuiabá airport tonight.

As I said, we still had time for some birding which turned out to be excellent. At one bridge we saw this very responsive American Pygmy Kingfisher. (The kingfishers are actually very territorial and often respond to recordings of their vocalizations.) 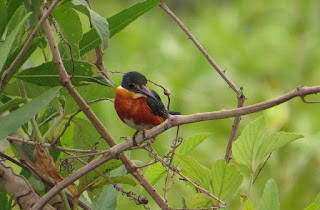 Playback at a Gray-breasted Crake in just the right configuration of vegetation resulted in a wonderful sighting of this very shy bird. 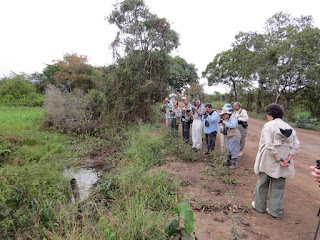 I alerted the group that we were standing next to a large patch of Heliconia psittacorum, so we were well prepared when a scarce Buff-bellied Hermit flew in. Will Russell was especially prepared as he snapped this shot of what was one of my favorite birds of the trip. 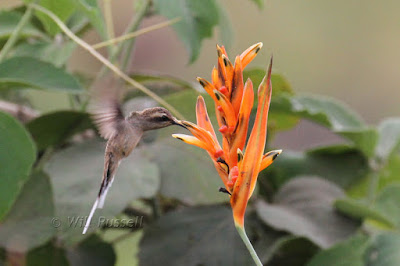 We paused again at the mango grove where this time Fabrice spotted the roosting Great Horned Owl that we couldn’t find two days ago. 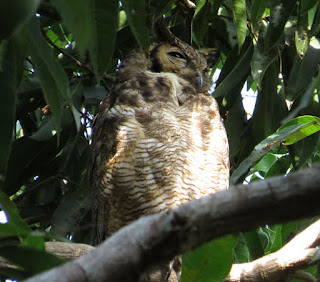 It was very busy with birds here, Chotoy Spinetail, Maguari Storks, and many other birds keeping us diverted. I managed a shot of this Silver-beaked Tanager that barely shows the deep velvety red. 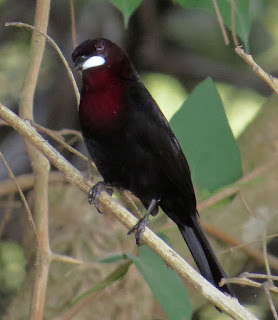 A good find here was this migrant Yellow-browed Tyrant, a bird I’ve seen perhaps only 3 or 4 times. 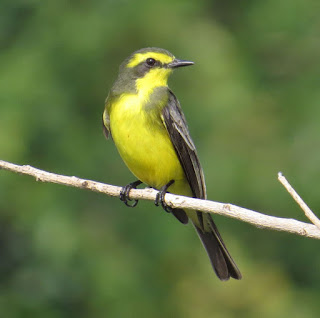 We made an emergency stop for a roosting Great Potoo that Fabrice says he spotted while we were driving. I think he must have had inside information. Or he possesses twice as many rods and cones in his retina and has a superhuman flicker fusion threshold. But there it was. People got back on the bus stunned.

But I proved my prowess by spotting this retina-scorching Scarlet-headed Blackbird. It took me two minutes to explain where it was to Fabrice, as he had a hard time seeing it. 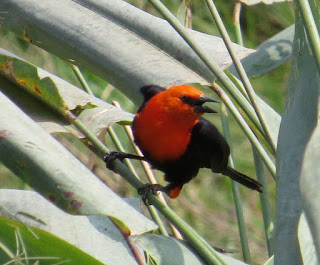 We did have lunch at Pouso Alegre, seeing a few nice birds as well as this fancy treehopper, Membracis bucktoni, in the mango trees. 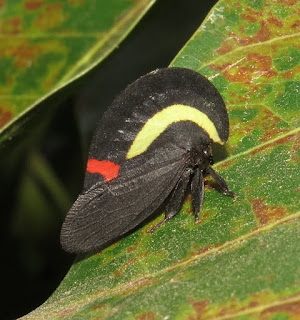 We made only a couple brief stops on the final stretch back to Cuiabá. One was for this cooperative Guira Cuckoo, normally a very common species but one that had largely avoided giving us decent views until now. 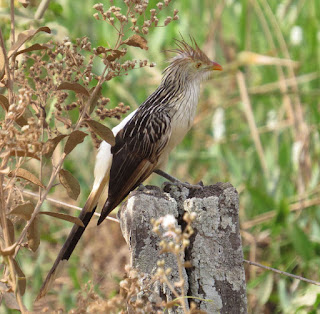 And a final stop at a truly pantanalian sight, dozens of egrets and countless Yacare Caiman, with Fabrice wondering how close he can get without scaring them. 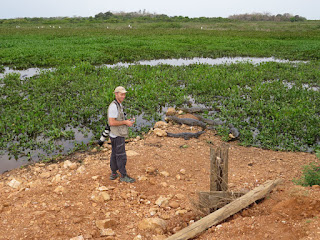 Posted by Birdernaturalist at 9:45 AM