Today was a travel day, changing worlds from the Amazon rainforest to the Pantanal while remaining in the same state of Mato Grosso. Like magic. Nevertheless, we had a good morning’s birding at Cristalino before our scheduled departure.

But wait – with just one last morning in such an amazing place, how I could possibly just sleep in when so much of the magic in the rainforest happens under the cover of darkness? To the dismay of Fabrice, I set my alarm for 3:50 a.m. and walked the trail towards the tower. There was not as much bird vocalization as I had expected, but I did hear Tawny-bellied Screech- and Crested Owls. The Red-handed Howlers began roaring early as well. The only photos I came back with were of this true bug, possibly in the broad-headed bug family Alydidae. 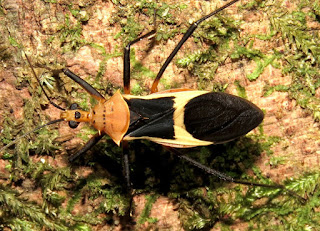 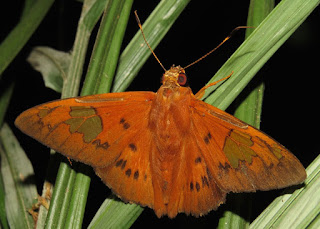 Then the group gathered for a dawn vigil in the secret garden, a small rocky area not far from the common area that resembles a tiny version of the serra. We had a Blue-black Grosbeak here, only my second ever at Cristalino, fabulous views of Tapajos Hermit feeding from the Ananas ananassoides wild pineapple plants, and a pair of distant perched Red-fan Parrots, really showing off their crests. 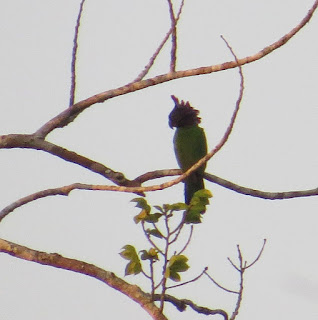 The old dried fruits of this vine looks like the open-ended flasks of the family Lecythidaceae, but I think all members of that family are trees; I have no idea what this is then. 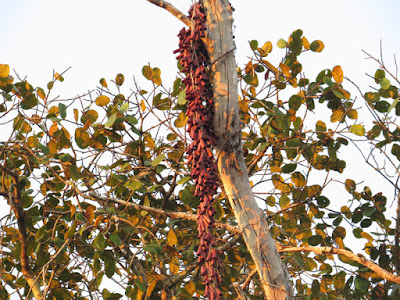 We moved then to the staff clearing where we saw several more birds, including these Curl-crested Aracaris feeding one the açai palm fruits. 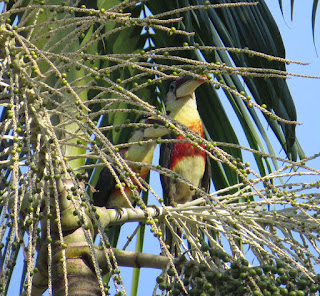 The Samanea was blooming nicely providing food for at least 3 species of hummingbirds as well as this Eulaema sp. orchid bee (yes, the same subfamily, Euglossinae, as those shiny green orchid bees). 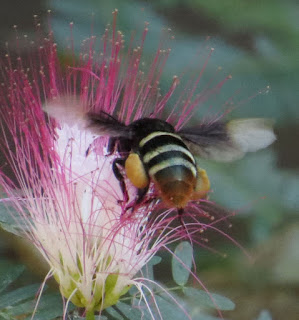 I also saw a some more nice butterflies before we had to leave. This is the upperside of Callicore cynosura, Cynosura Eighty-eight. 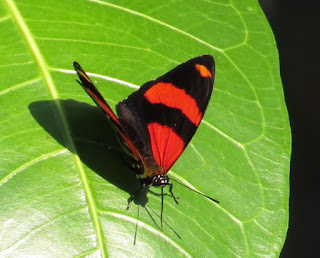 And the first “greenmark” I have seen in a while, Caria trochilus, Trochilus Metalmark 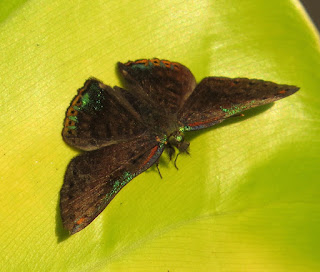 We departed early from the lodge in order to have some time to bird from the boat along the Cristalino River, rather than having to rush to the Teles Pires river bank. We hoped to catch a glimpse of yesterday’s Harpy Eagle, but they never seem to show up in the same place twice. 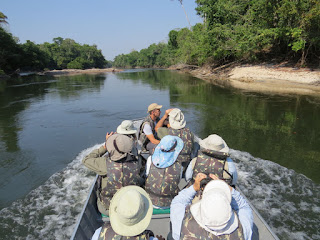 We did have an exciting raptor soaring overhead, at first thinking it might be an Ornate Hawk Eagle, but saner minds and photos held sway, and we settled on a female Hook-billed Kite. 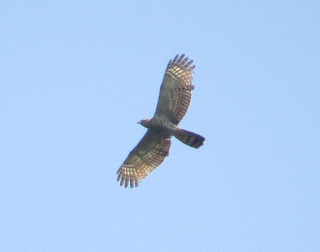 Our flight back to Cuiabá was only 15 minutes late, but this still meant arriving at our lodge Pouso Alegre well after sunset, not long before dinner. We then took a drive for spotting night life but only had Common Pauraque and Common Potoo. Tomorrow we drive deeper into the Pantanal for some Jaguar seeking.
Posted by Birdernaturalist at 9:19 AM