After an early departure from Santa Cruz, we drove until we came to a side road I had staked out for a picnic breakfast and some fun early morning birding. On this tour we have a bus driver, Carlos, and his sister Benita, a cook we are borrowing from her regular job as cook and manager at Refugio Los Volcanes. A hot cooked breakfast every day is quite a luxury. 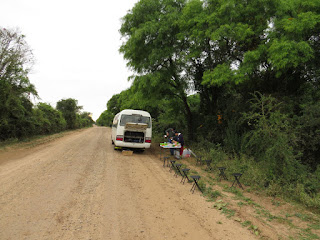 We heard Red-legged Seriemas again here, but couldn’t get close enough to see. White-tipped Doves were everywhere and several species of parrots were leaving their roosts to go feed somewhere for the day. The fanciest one, and one that was cooperative enough to perch for spotting scope views was this Yellow-collared Macaw. 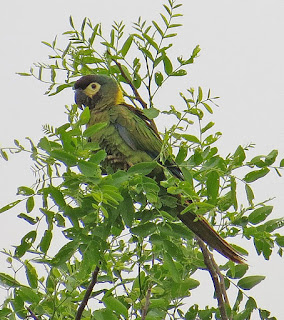 Another sign of a wet winter was this bignoniaceous vine in full bloom. 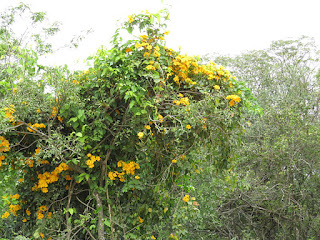 As we continued south on the main highway we stopped for our first Green-cheeked Parakeets and this Toco Toucan perched next to the road. 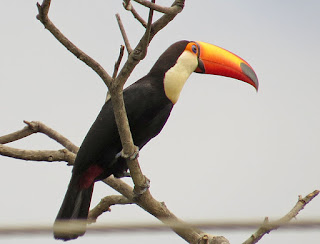 Another birding stop along the way was Rio Seco, a well-named, broad, sandy river bed that must flow only during a short time after heavy rains in the foothills to the west. 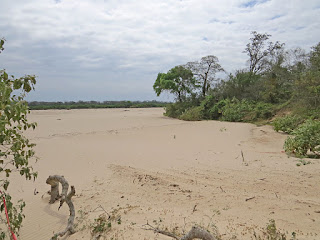 I don’t usually encounter too many butterflies at this season; as with the Pantanal, it’s been dry and sometimes cold with the passage of cold fronts, and their populations are at their annual low. I’ve been here in February and March, when butterflies are everywhere.  This metalmark therefore stood out. I think it is Emesis diogenia. 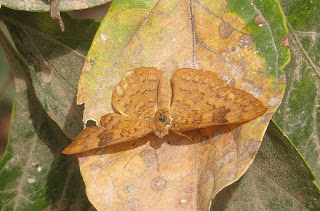 This skipper is the widespread Polythrix caunus, Four-spotted Longtail. 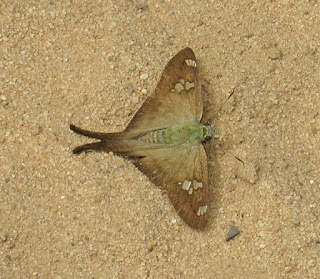 We had made good time, so it was nice to get to spend a while checking out the marshy edges of Laguna Tatarenda. Here were these Black-necked Stilts, formerly split as White-backed Stilt. They not only look obviously different, but they have much lower and more nasal calls than our northern birds. I’d be surprised if there really were much intergradation, and I suspect a re-split is in order. 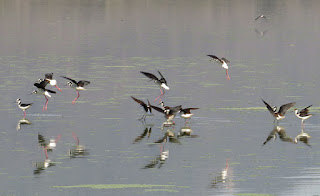 I had called out a group of White-faced Ibis, which I photographed, then we concentrated on looking at other birds. I later looked at my photos and realized that these looked like Puna Ibis, a bird I wouldn’t have expected at this low elevation. But these are probably wintering birds from much farther south. Note the thicker and shorter neck and thicker, redder bill.

This small puddle party of sulphurs contains five species – most on the right are Phoebis argante, Apricot Sulphur; second in from right is a Phoebis sennae, Cloudless Sulphur; the white one front-center is Aphrissa statira, Statira Sulphur; the giant greenish one second from left is Anteos clorinde, White Angled-Sulphur; and the one on the far left and behind the Anteos is Phoebis neocypris, Tailed Sulphur. 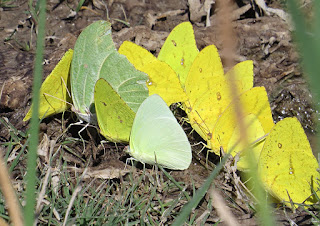 We birded another road not far from here that went a bit into the foothills, covered in a semihumid forest that is difficult to characterize. In it we found Two-banded Warblers and White-bellied Hummingbird to be common, while some of us glimpsed a Saffron-billed Sparrow and a White-backed Fire-eye. 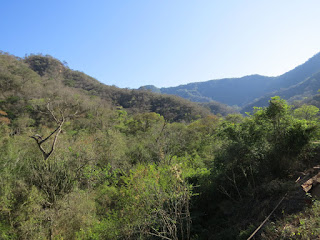 This huge, super dense nest of silk webbing, seemingly anchoring the tree to the ground, appears to belong to a tent caterpillar, presumably a moth in the family Lasiocampidae. 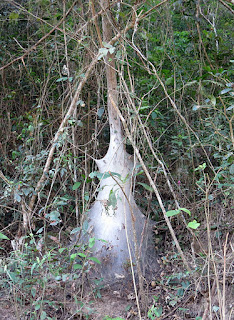 We arrived in the late afternoon at our hotel for the next three nights, right on the outskirts of Camiri.
Posted by Birdernaturalist at 1:06 PM