This morning was our turn at Tower II, the 53-meter tall canopy tower across the river. Activity wasn’t bad, and we had distant views of a Pompadour Cotinga, mostly just in flight, as one highlight. A very close Southern Scrub-Flycatcher and a Layard’s Woodcreeper (recently split from Lineated) were also memorable. The only photo I took worth keeping though was this Spangled Cotinga. 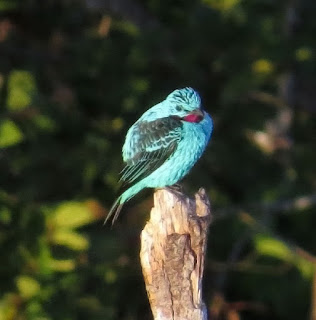 On the way back we birded a forest trail that was very quiet, but a highlight for me was spotting this Snow-capped Manakin nest. Notice the white Rhizomorpha fungus it incorporated with plant and moss fibers. Many species of birds use this fungus for some reason, and Bare-necked Fruitcrow apparently makes its nest solely from it. 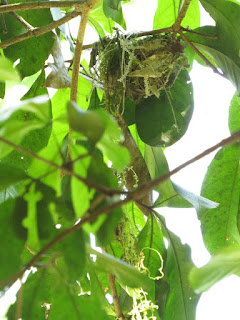 Back at the lodge for lunch and afternoon break, I found that the Uroderma sp. tent-making bats had returned, making a new nest in the Phenakospermum stand by the old kitchen. Yesterday I failed to find them noticing that one of the staff had cut down the leaves they were using two weeks ago. I made a point this evening of letting the manager, owner, and at least a couple staff know that cutting these plants was a no-no. 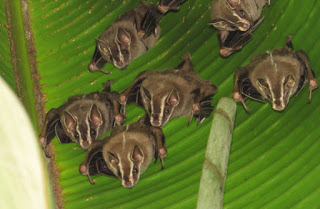 Of course, the Saccopteryx bilineata, White-lined Sac-winged Bats were reliably under their undisturbed eves of the leaders’ dorm. 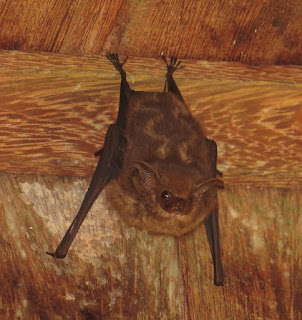 Puddle party action by the boat dock continues with lots of pierids but not many swallowtails or skippers, but this Baeotus aeilus, Amazon Beauty, did at least provide some relief from the yellows and whites. 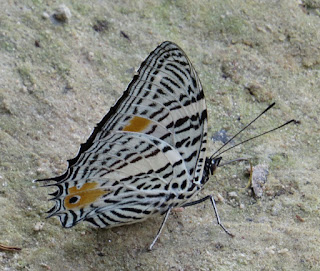 Yesterday afternoon and much of today Fabrice and I were annoyed by the noises made from a nesting pair of Palm Tanagers on our roof, right by the screen that is supposed to allow accumulating heat below the ceiling to escape. Just as we were preparing to head out for the afternoon I noticed how unusually loud the insistent begging was from one of the chicks, and then I noticed it next to my bed and my tangle of recharging cables. It had been there for a while, leaving quite a mess. Considering Palm Tanager rather a weed among birds, I didn’t feel the need to give it any special attention, so I just left it under the palm shrub in the shade outside our room, expecting that its begging shrieks would eventually attract the feeding urges of the parents. 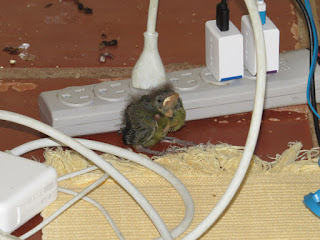 On my afternoon outing I took my group to the Manakin Trail through igapó forest, a seasonally flooded forest that has very well-drained soil and therefore has a very open understory and doesn’t remain muddy (unlike várzea in much of the Amazon basin). On the trail we saw few birds, but a noisy family of Red-throated Caracaras did entertain us and allow close approach. 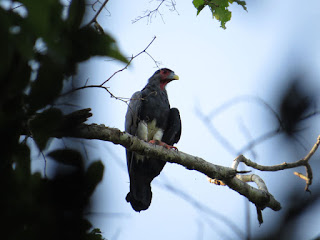 The trail ends in a low sump that still had some water, indicating it had been an unusually wet and long rainy season (we are near the end of the dry season now, and in most years past this site has been totally dry by this date). We approached the pond very quietly but still caught only glimpses of a very shy Sunbittern that disappeared into the forest. But our sneaking did pay off with fabulous views of a White-throated Tinamou that came up for a drink just as we were arriving. I have heard this species a few times at Cristalino but this was the first time I’d seen one. I didn’t manage any photos, but I noticed the white speckling in plumage, a clinching field mark. After it left, we came out into the open next to the pond and watched the canopy and undergrowth for anything coming in for a drink. We did see Dot-backed Antbird bathing, and a Long-billed Woodcreeper came into the trees overhead. 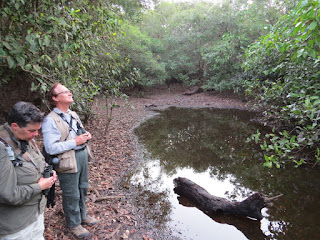 This evening after diner I offered to take people down to the rocks to see what fish and other critters we could spot. One was this young Caiman crocodilus, Spectacled Caiman, which we could have caught.

There are many species of armored catfish here, but they are difficult to photograph and almost impossible to identify. This is in the family Loricariidae. 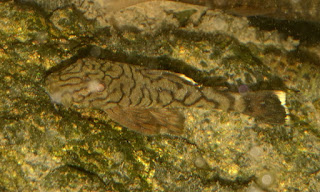 This Fredius reflexifrons freshwater crab was fully out of the water to feed on something on the rocks. 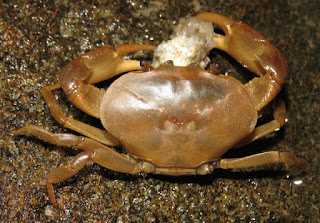 There are tiny freshwater shrimp if you look closely.

I turned over a small rock to find this ghastly larva, probably a dobsonfly.

On the way back to the rooms I flushed this Pristimantis sp., a frog formerly in the huge genus Eleutherodactylus. This species wasn’t identified by the herp survey that took place here more than a decade ago and could be an undescribed species for all I know. 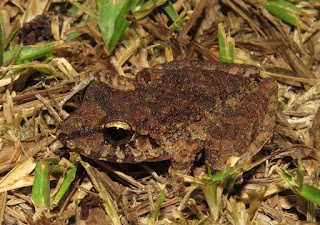 Meanwhile at the moth sheet, where I took dozens of photographs, here are some highlights:

Pseudautomeris sp., a saturniid silk moth. I had never seen this one before and did a thorough search of Automeris species before I finally found the correct genus; I still don’t know the species. 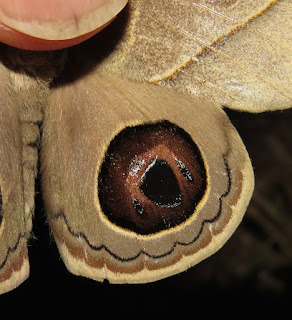 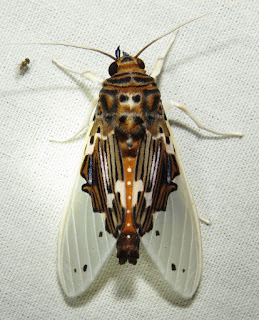 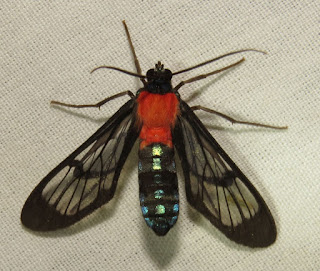 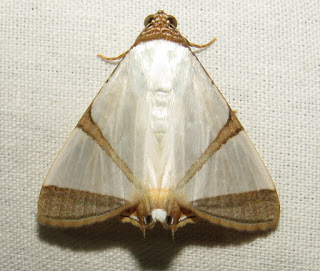 a geometrid moth, an emerald in the subfamily Geometrinae 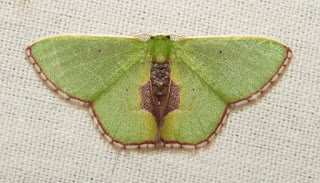 and a probable geometrid moth that was totally new to me. 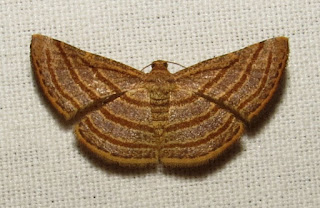