The amazing eyes of Fabrice spotted our first Jaguar this morning. It was tucked under the foliage a bit, sitting on a bank overlooking the Tres Irmãos River. Our group is in three small boats, but the two of us in front were able to turn around just in time to see it lying there then get up and disappear into the forest. Fabrice managed one quick photo. 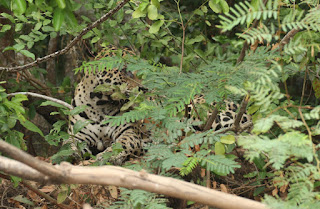 We waited around a bit to see if it would reappear, and at least four other boats arrived, hoping for the same. The river vegetation here was very dense, and it didn’t look as if there would be a place for it to reappear. While waiting we spotted group of Alouatta caraya, Black Howler, apparently looking down on the jaguar. 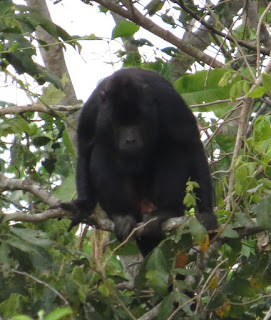 I then decided we could see more birds and maybe even another Jaguar if we continued up river. We indeed saw lots of birds. This is a Pied Lapwing. 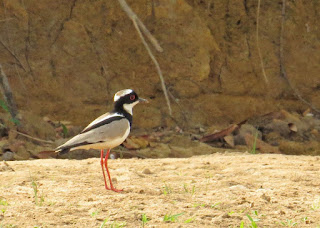 Southern Rough-winged Swallows were by far the most numerous bird (the dirt banks here must be absolutely ideal for their nests), but this White-winged Swallow was more photogenic. 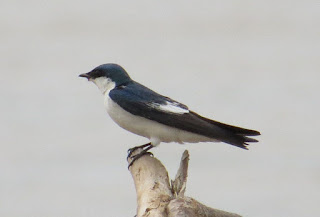 This is a rare plumage of Rufescent Tiger-Heron, an older subadult. I believe it’s still unknown how long it takes these birds to transition from juvenile to full adult plumage; it might take a few years. 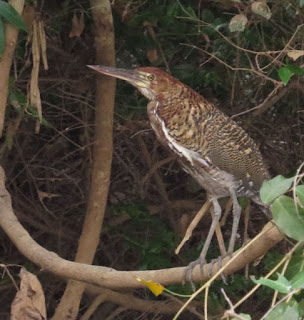 Not just birds – we saw plenty of Hydrochoerus hydrochaeris, Capybara. 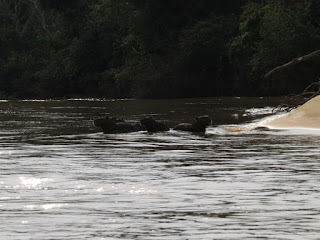 Then mid-morning we got word that another Jaguar had been spotted back downriver. Or rather, we saw a boat speeding by at full speed and got the gist.

Here it was, overlooking the river in a more open location, and totally at ease with the gathering flotilla of boats below. We counted 21 well-behaved boats holding just about 100 people. 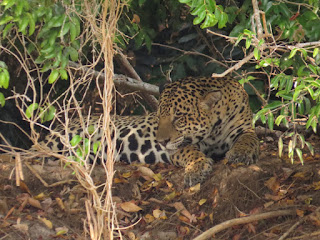 My friends Beth and Will Russell came as participants on the tour; here they are with a Jaguar after-glow. 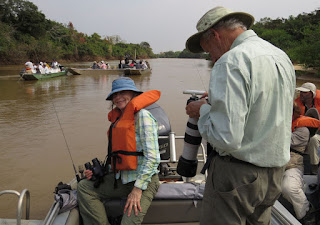 One of our fine boatmen, Aloysio. 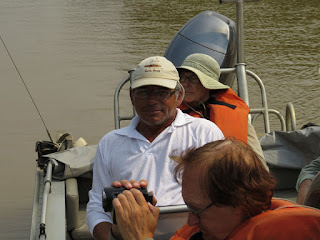 We returned to our boat for lunch, then set out again the afternoon to see more wildlife. 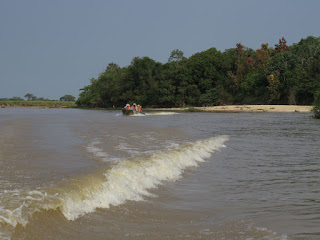 Black-capped Donacobius must be one of the most photogenic birds here. It had, at various times, been classified with wrens, other times with thrashers, but recently finally got what it deserved – monotypic status in its own family, Donacobiidae.  They have a fantastic duet, bowing and pumping their tails, inflating a grouse-like orange neck sac that is barely visible here. Despite all this, whenever I say this bird’s name, I hear the round in my head “Dona Nobis Pacem.” But of course the words are “Donacobius Pacem.” Try watching https://www.youtube.com/watch?v=QewO_lVomGs and you’ll never hear it otherwise again. 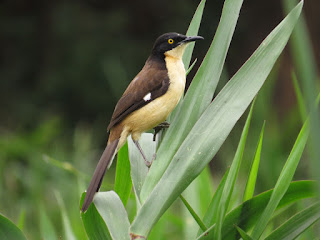 We got very lucky to see this buck Blastocerus dichotomus, Marsh Deer. 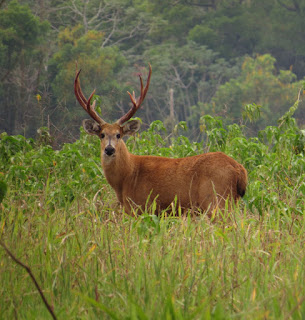 Also a lucky sighting was of this Ringed Kingfisher with a Helicops leopardinus, Leopard Water Snake. It was crushing the length of the snake with its bill, alternating with whacking it with great force against the branch. We finally watched it swallow the whole thing. 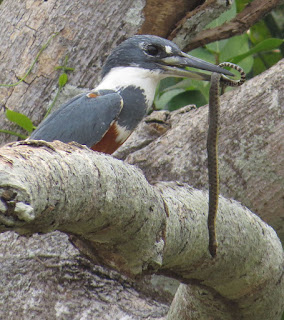 A very common tree here is Triplaris americana, an exclusive home to an ant with a powerful sting (Pseudomyrmex triplarinus), dioecious, and a member of the buckwheat family, Polygonaceae. This female was particularly brightly colored. 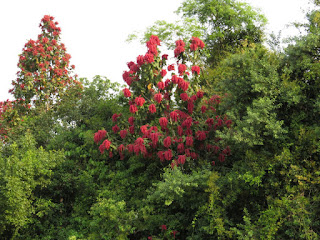 We rushed to two other Jaguar sightings today to arrive with a bunch of boats drifting around waiting for an animal to appear where one had been. Each time we eventually gave up to find more birds or a more cooperative one.

Finally, very late in the afternoon came word of another Jaguar, so we dashed off to find the same animal as this late morning’s sighting enjoying a view of the river below. 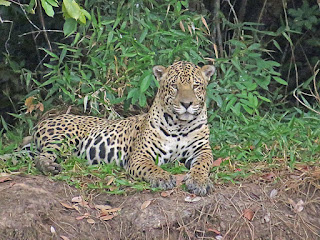 Posted by Birdernaturalist at 9:36 AM