Today we awoke to the loud, rollicking hoarse duets “pick-it-all-up/you-pick-it-up” of the Chaco Chachalacas all over the grounds of our lodge. Despite the noise, before breakfast our attention naturally was drawn to the Hyacinth Macaws feeding, playing, and obviously starting to nest in the trees by the horse corrals. 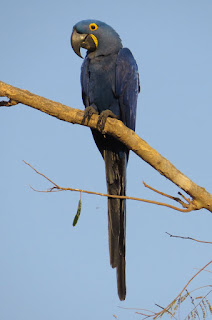 After breakfast we walked the entrance drive of our Pouso Alegre lodge in advance of the long drive south to Porto Jofre. This Capped Heron was surveying its territory from the top of a tall tree. 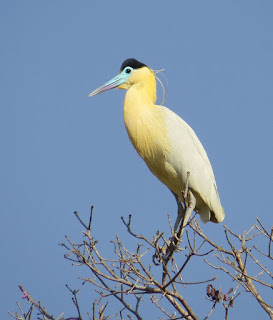 I whistled in this predictably territorial Ferruginous Pygmy-Owl. 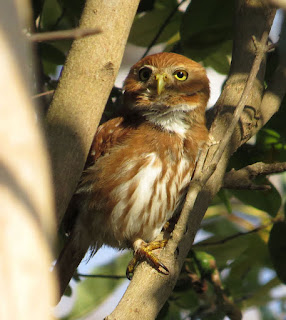 Noisy groups of Monk Parakeets were tending their nests. 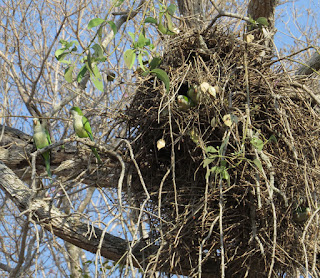 One of the most characteristic sounds of the Pantanal dawn is that of the duetting Plumbeous Ibises from their perches in big trees. 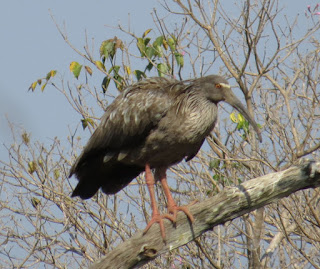 Maybe just feeling pretty in this pink Tabebuia was this Rufescent Tiger-Heron. 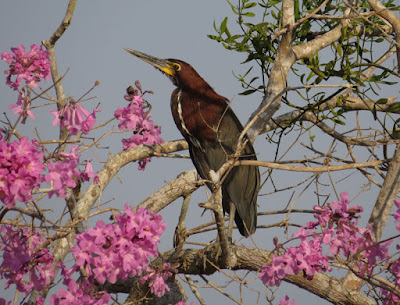 A favorite observation for some was watching this Chestnut-eared Aracari feeding on Ipomoea asarifolia morning glory flowers at the edge of a pond by the road. 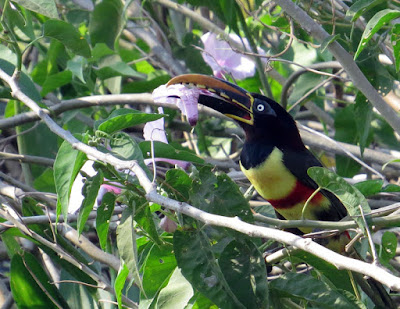 This pair of Jabirus were right next to the road on our way out, causing our driver to suddenly stop for a photo op. 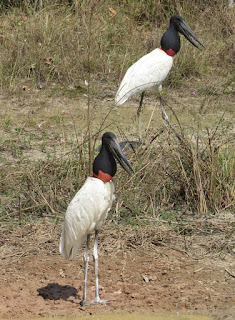 With such a long dry season as well as occasional pouncounced cold fronts from the south, this is a terrible time of year for butterflies in the Pantanal. So I was surprised at lunch to see this Taygetis sosis fly in and land in the office of the hotel in Pixaim. 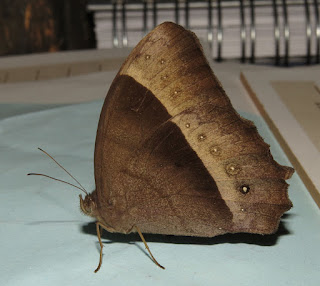 It’s a long drive to Porto Jofre, so I was nodding off in the front seat of the bus when Carlos stopped and pointed out my window. I jerked my head up just in time to see this Eunectes notaeus, Yellow Anaconda slither off into the undergrowth, but we were lucky that it stopped just in the shade for better views. My guess was that it was only about 6 feet long, probably average for this smaller of the species. Carlos had seen it completely stretched across the road, probably sunning, and it moved off either seeing the bus approaching or feeling the vibrations through the ground. 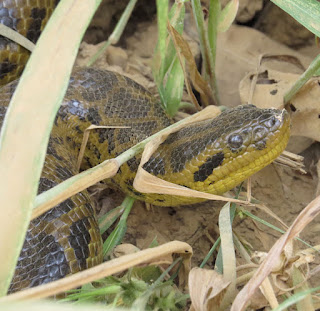 We made a stop at the abandoned farm house and mango grove near the southern end of our drive. I had never entered the house, but bold Fabrice did, finding a huge colony of Glossophaga soricinia, Pallas's Long-tongued Bats. 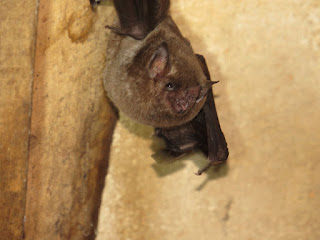 We arrived with perfect timing at our hotel for the next two nights, the Jacaré Boat, and motored upriver to be close to the area where most jaguars are seen, arriving just after dark.
Posted by Birdernaturalist at 9:26 AM