Snow in the Catalinas, Water in the Rillito

From the Rainlog.org data uploaded by members in my neighborhood, we've had almost exactly four inches of rain in the first six weeks of 2010. That's already more than half of what we received in all of 2009 (which was 7.14 inches).

Here's a photo in the wake of the storm that passed through January 22-23, 2010. This is 3/4 of a mile from where I live in north-central Tucson. Note the water flowing in the usually dry Rillito River, and the low level of snow in the Santa Catalina Mountains.


This is exciting stuff for us. One might first think about the spring wildflowers, but from Tucson southward and eastward, those sorts of plants that respond to winter rains with a flush of spring growth and bloom are not a significant part of our plant diversity. Such winter rains have been so unpredictable over the past few millennia in this region that they have been selected against. Instead, we have a large number of perennial plants (shrubs and trees, especially) that while amazingly well adapted to a dry, hot climate, simply cannot survive on just 7 inches of rain a year. Our average is 12 inches – with those summer rains being the most predictable. The rain we've received these past 6 weeks will go a long way to providing for these shrubs – hopbush, acacias, jojoba, kidneywood, babybonnets, sumac, etc. – many of which died, and many others which were just barely hanging on in this past year's drought.
Posted by Birdernaturalist at 7:13 PM 1 comment:

I led a private tour for a family on vacation together in Costa Rica right after Christmas. As it turns out, this is a great time of year to travel in Costa Rica. You might think that hotels, restaurants, bus drivers, etc would be on vacation, but this is actually in the midst of their high season.

The family I was privileged to guide spanned three generations and included eight people from ages 10 to late 70's. The keenest birder was 14-year-old Gabriel, but everyone seemed to enjoy seeing birds, monkeys, and all manner of tropical nature. The birding and natural history this time of year was excellent.

We first had some birding on the hotel grounds in the Heredia suburb of Santo Domingo. We saw Rufous-naped Wren, Plain Wren, and Blue-crowned Motmot here, plus a couple nice butterflies such as this Crimson-patch Checkerspot, Chlosyne janais...


...and this Manis Satyr, Pedaliodes manis. This one seems to have adapted to the ornamental bamboos in the gardens.


We then drove to Tapantí National Park in mid- to upper-elevation cloud forests on the Caribbean slope, not far from Cartago. The cloud forests here are gorgeous. 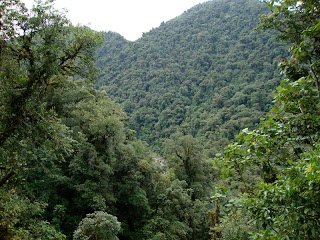 In this cool, moist climate, a species of violet grows on the roadside. 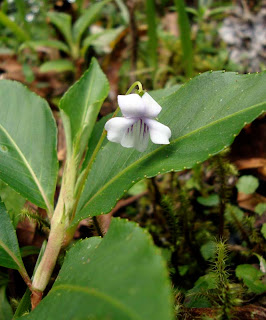 This is a bromeliad in the genus Pitcairnia. (Thanks to my friend Brad Boyle for the ID.) 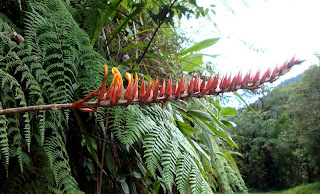 We then birded the Savegre River Valley, also known as San Gerardo de Dota, in the shadows of Cerro de la Muerte. Everyone got to see the fanciest bird of the region, this Resplendent Quetzal. A pair was actually visible in this fruiting Nectandra tree from within our rooms. 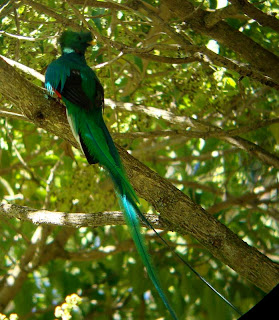 Here's the whole family looking at the quetzals. Even those who preferred horseback riding, zip lining, or reading enjoyed seeing this gorgeous bird. 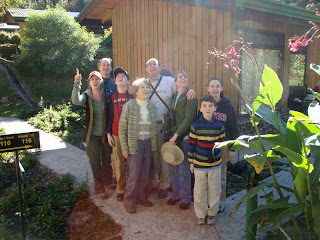 From the same spot on the next morning we watched a pair of Emerald Toucanets. 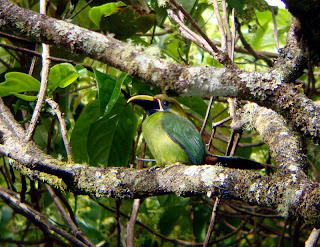 This hummingbird had me quite puzzled. It mostly looked like a White-throated Mountain-gem, but with only a little tiny white spot in the center of the throat. The pale base to the mandible was also a bit odd. Perhaps it was only a juvenile (which I would have expected would look more like a female with a cinnamon ventral area), but since hybrids in hummingbirds aren't all that rare, I wondered if maybe one parent wasn't a Fiery-throated Hummingbird. 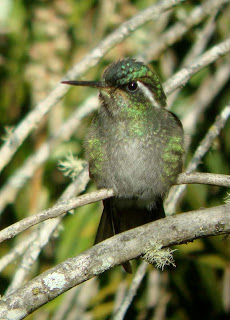 This odd little fungus growing in the Costa Rican Oak forest is in the genus Calostoma (thanks to Rosanne Healy for the ID). 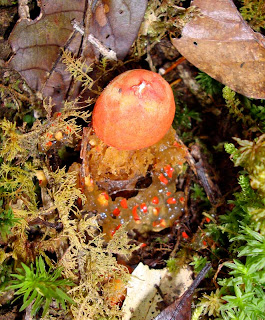 Late in the sunny morning of our first day we tried to go to the high elevations of Cerro de la Muerte but were forced to the side of the highway for over a half hour as the Vuelta de Costa Rica international bicycle race took over the road. 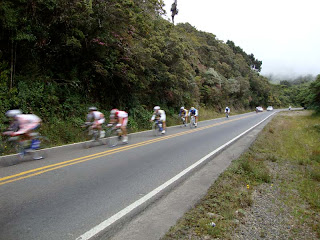 On the morning we left the area, we did make it to the top, but the weather had changed significantly, with cold, blowing fog and mist in the Swallenochloa bamboo páramo. We still managed to find the Volcano Juncos. 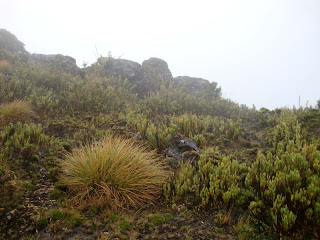 The second half of the tour we spent in the Caribbean lowlands at Sueño Azul Resort including a walk in Braulio Carrillo National Park and a morning at La Selva Biological Station. At La Selva, we kept running into Black-throated Trogons. 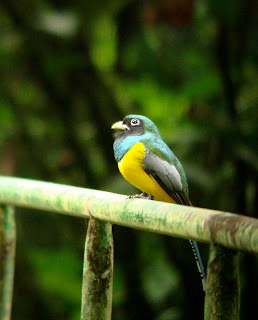 This fungus is a Xylaria species, also known as dead man's fingers (thanks again to Rosanne Healy). 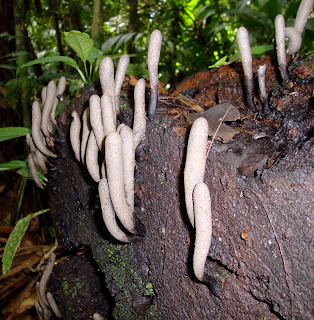 We saw several Strawberry Poison Frogs, Oophaga pumilio, at La Selva, but this one was near our rooms at Sueño Azul.


This leaf-footed bug was at La Selva. 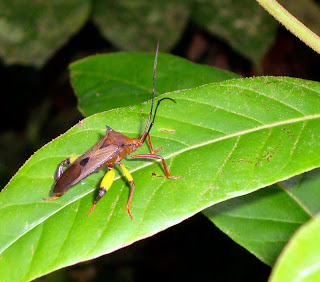 
It was a birdy day, and this Yellow-bellied Elaenia was one of our final additions to the day's list of 116 species. 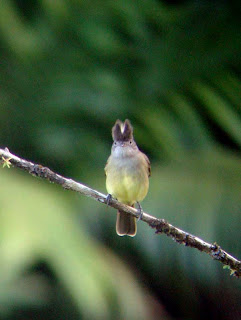 This is a panoramic shot from the Sueño Azul grounds showing the volcanoes of Tenorio and Barva.

On our last day we had lunch at the La Paz Waterfall Gardens, including a hike to one of the many spectacular waterfalls. 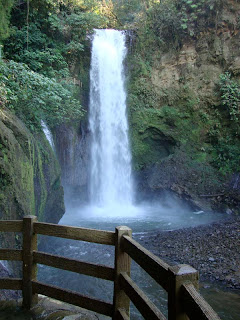 The feeders here were alive with action, and visitors included this Coppery-headed Emerald (formerly considered a Costa Rican endemic until it was recently found in Nicaragua)... 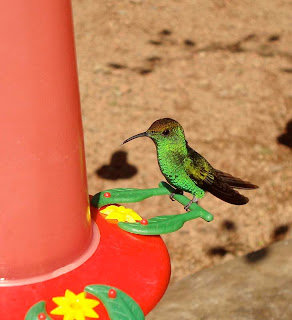 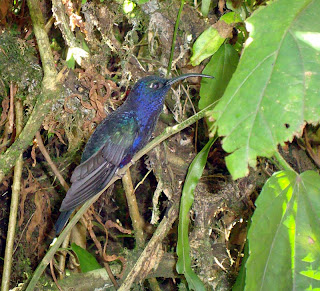