The main part of my WINGS Marvelous Mato Grosso tour has come to an end, and it has been a spectacular tour for birds and animals. It will be impossible to match this one in future years, with such amazing sightings as Crested Eagle, Harpy Eagle, and five different Jaguars, as well as an above-average bird list of about 490 species. But for me, it’s been particularly exciting to have had five snakes – on a typical tour we’d see between zero and two, and I’d not necessarily get to handle any of them. I was able to pick up three of these.

The first might be the most interesting one for me, because I had no idea what it was. I did know it was not something dangerously venomous – it was small, and a “colubrid” (in the broader sense), and in the Americas you really have to be wary only of snakes that are brown and blotchy and obviously viper-like or colorful and obviously coral like (of course there are some corals that are almost unicolor too, but they are easy to recognize). This tiny thing was spotted by my participants as we completed a late afternoon and evening walk at Pousada do Parque at Chapada dos Guimarães north of Cuiabá early in the tour. It is either Sibynomorphus mikanii or S. turgidus, and even the experts seem to disagree on how to ID them. It specializes on feeding on slugs, and its saliva is probably venomous to them. It would be in the family Dipsadidae were that split from Colubridae, most members of which have some sort of mild toxin in their saliva. If you could make it bite you, it might be something like a bee sting. 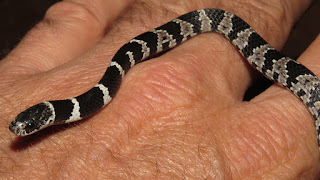 At Cristalino Jungle Lodge we had just one snake – this Boa constrictor, the only animal in the world that most people know only by its scientific binomial. (Ocean Sunfish, also called Mola-mola (Mola mola), would be a contender, except it’s also known by that English name.) The lodge groundskeepers found it while weed whacking, and our boatman Waldirio saved it for us while we were out on the trails. I was told by the bartenders to be very careful with this dangerous snake, and of course it was more docile and less of a threat than any kitten one wouldn’t normally think twice about holding. 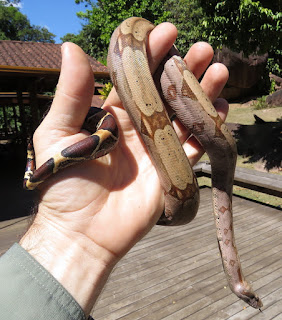 I did not pick up this gorgeous Bothrops matogrossensis, the Mato Grosso Lancehead, which our driver Robson spotted on our night drive at Pouso Alegre in the Pantanal. This is a pit-viper, and probably dangerously venomous, and at the very least would deliver an extremely painful bite. Members of the genus Bothrops and related genera are often called “fer-de-lance,” a name perfectly analogous to and equally useless as “sea gull.”

In this close-up you can see the heat-sensing pit between the eye and the nostril, hence the name pit-viper. 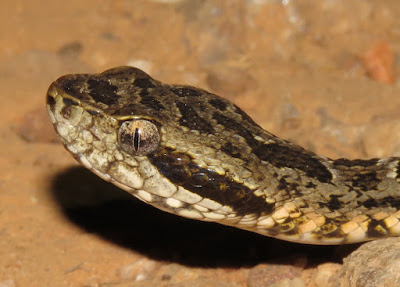 On a night drive north of Porto Jofre we came across this large colubrid stretched out across the road. I wasn’t sure of the species at first, but my friend Luis Vicente, one of the owners of Pouso Alegre lodge, tells me it is Clelia plumbea, one of the several species known as “mussurana.” I’ll call it Lead-colored Mussurana, just translating the specific epithet. Interestingly, the musk of this snake wasn’t the least bit disagreeable, actually being somewhat minty and citronella-like.
. 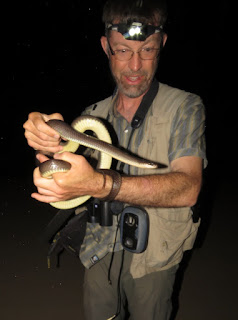 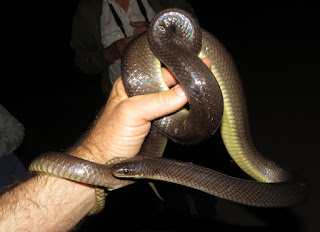 Finally, this Chironius laurenti, Bolivian Sipo was on the road yesterday as we drove from Porto Jofre to Pousada Piuval, our last lodge. It’s a very fast racer and probably very bitey, so I didn’t attempt to catch it. We briefly saw one on the tour last year, but it vanished before we got photos. 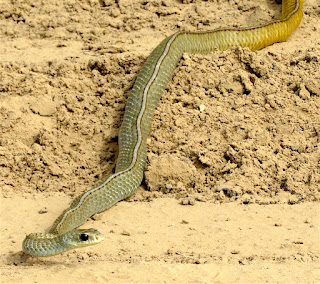 We’re headed to Iguaçu tomorrow for a three-night extension – spending all of our time on the Argentinean side of the border where the spelling changes to Iguazú. I suspect we’ll add well over a hundred new species to the already huge bird list.

Posted by Birdernaturalist at 2:25 PM No comments: