I have a huge backlog of postable photos from my recent Bolivia and Peru tours. Here's a tiny sample of a particularly attractive one to keep this blog active.

Tiger Beetles (Cicindelinae) are one of the many subfamilies of the ground beetle family, Carabidae. Despite being just one of many subfamilies of beetles, it's an incomprehensibly diverse order of insects. In North America alone there are 109 species of tiger beetles, and more than 2000 worldwide. Almost every insect group is more diverse in the tropics, but it's surprising how rarely I come across tiger beetles on my travels in South America. And even rarer yet that one poses long enough for me to photograph it. 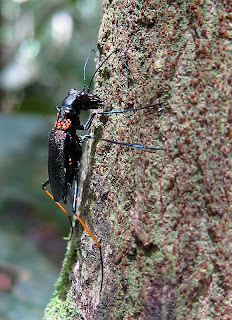 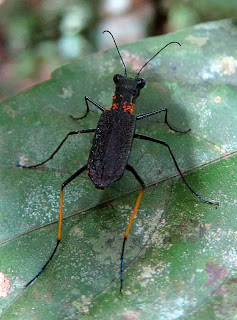 Luckily, I know one of the world's foremost authorities on tiger beetles. David Pearson lives here in Arizona and is also an avid birder. We bump into each other occasionally while birding here and were roomates for a week in Gambell, Alaska a couple years ago when I was cooking for the WINGS tour he was a participant on. So whenever I come across a tiger beetle, off I send the photo to him. He also noticed the red mites on its thorax, which in the field I mistook for red pigmentation. They're apparently not parasitic, merely hitching a ride. This sort of commensalism is called phoresy.

A few years ago in Bolivia I met some researchers who were specifically studying a group of tiger beetles that prey solely upon dung beetles in Amazonian rainforests. To find their quarry, they had to first attract the dung beetles with traps. I won't go into the details as to how they actually did this, but perhaps you can fill in the gaps if I mention that it involved the cooperation of the tourists staying at that lodge, as well as a well-paid volunteer.
Posted by Birdernaturalist at 8:18 PM 6 comments:

Here at the ECOAN reserve at Abra Patricia in northern Peru, birding can be difficult. The montane cloud forest, thick with bamboo and moss, is hard to see into. Antpittas, tapaculos, and other skulkers await the patient birder. 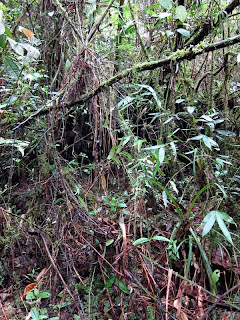 But better than seeing any of these is the experience of hearing a duetting pair of Chestnut-breasted Wrens. We actually saw them as well, but they don't look like much. I posted this recording to the Xeno-canto website. Enjoy.

Posted by Birdernaturalist at 8:57 PM 4 comments:

Today we drove from Tarapoto to Moyobamba, the capital of San Martín province, Peru. Don't worry, I had never heard of these towns before studying up for this tour either. But they are busy little cities with very nice hotels and not far from great birding spots. Looking at a map, you might think we are in the middle of nowhere, but with everything connected by paved highways, it's quite civilized.

Which makes it most amazing that along this paved highway we made a short stop at a small bridge, looked down, and saw Oilbirds. One of the world's weirdest birds, the nocturnal Oilbird's ecological function is more like that of fruit bat than any bird. They are nocturnal, colonial, live in caves, and navigate by sonar. And most known locations involve something of a hike or some pre-dawn departure to a remote cave. This spot is nothing short of amazing. When you arrive it doesn't even look like the bridge is going over anything larger than a little draw. 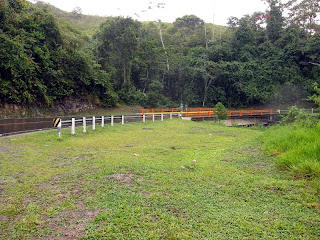 But look down, and there's a slot canyon to take your breath away. Not good if you're susceptible to vertigo. 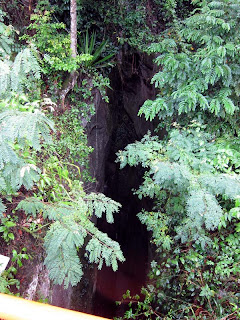 Look a little more closely, and there are the Oilbirds in the dark shadows. Three were sitting out in the open, and another 12 or so had bits and parts sticking out from the ledges. 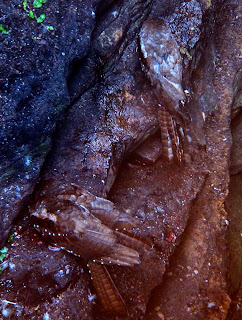 Near Tarapoto, we birded the Cordillera Escalera. Rain and fog drove us out this morning, but the light made the Tibouchina trees glow. 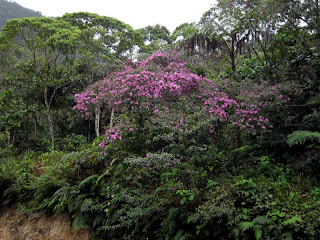 By the afternoon, the weather was gorgeous at the butte west of Moyobamba called Morro Calzada. This robber fly let me get a close shot while it was munching on a tiny gnat. 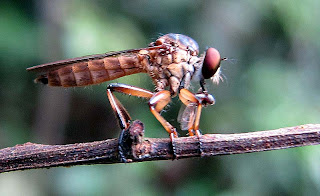