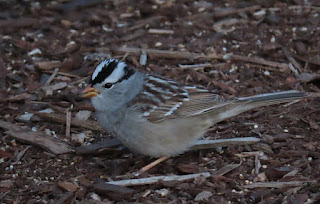 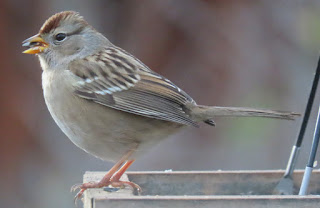 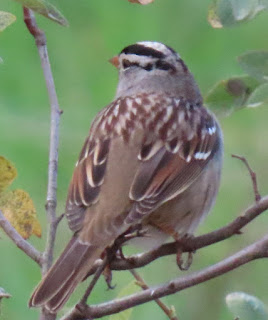 We had some very unusual weather here this spring (though there aren’t many on planet who couldn’t say the same thing these days). In early April just before these stray Gambel’s White-crowneds showed up, we had several days of persistent north and northeast winds and clear skies. Throughout the month we had drier weather (the driest April on record, in fact), colder nights, and warmer days than usual. It seems that these sparrows normally migrate only east of the mountains, and that makes sense considering that they’re coming from winter grounds in inland areas south and east of here and are returning to inland Arctic areas to breed. A route west of the Cascades would direct any northbound migrants along the coast and to Pacific forests of SW Canada and SE Alaska, not the interior Arctic. This is the route taken by our abundant migrant Russet-backed Swainson’s Thrushes and chryseola Wilson’s Warblers, for example.
So my guess is that this spring the unusual weather patterns, specifically the strong winds from the NE at the crucial altitude, led these sparrows to stray west of the Cascades. But if that is indeed the answer it only brings up more questions. If we were to have the exact same weather pattern next year, would we also see Gambel’s White-crowned on the west side? Or does it only happen in years with a bigger than normal winter population moving back north? How often does this happen? I’d love to keep track next year, but I’ll be leading my Jamaica tour in the middle of that same time frame. And I hope that a greater awareness will also result in more birders paying attention, documenting their sightings, and submitting their sightings to eBird.
Posted by Birdernaturalist at 12:52 PM No comments: