Back into the Bread-making Groove 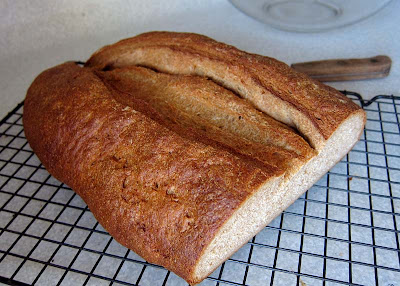 I've joined a new blogging community of some amazing writers and photographers at http://birdingblogs.com. I post on Tuesdays, and our focus is birding, whether it be identification, travel, pleasure, or conservation related issues. But it has to be about birds.

Here at Birdernaturalist, this is my blog, and when I'm home between tours, it's not all birding and natural history. And since this is my very own blog, meant to keep all my friends informed as well as serve as something of a diary for myself, I get to post whatever I want.

Since coming home from Peru I've baked five loaves of bread. I'm trying to not eat all of myself, so some went to a friend's house, some is in the freezer. And I don't see a slowdown in my baking until I head to the Galapagos next month. I'm trying out recipes and some new techniques in Peter Reinhart's Whole Grand Breads (I haven't cracked open Artisan Breads Everyday yet...) But I just can't seem to stop.

The primary technique he introduces in this book is what he calls the "epoxy method." It's very simple – make a soaker and a and starter separately, then after a certain amount of time for enzymes and yeast to do their magic, mix them together the next day (along with the rest of the ingredients). The overnight processes supposedly contribute to a better flavor and texture.

These photos mostly feature a Rye Meteil (which is mostly whole wheat, less than 50% rye). By making my own rye bread, I can eliminate caraway, which I don't like.

The soaker is merely water, flour and salt (proportions being all important in every step). 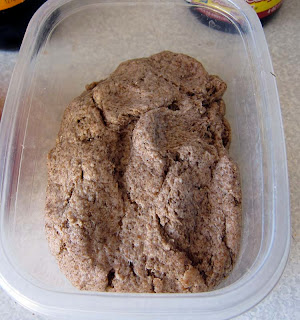 The starter is more like the final dough in that it also has yeast – but very little so that it rises very slowly. 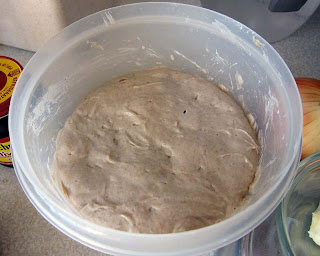 The other ingredients include some sweetener (honey and molasses here), some fat (butter here), more salt and yeast, and perhaps other added things – here an onion. One can also add other grains and seeds as well. 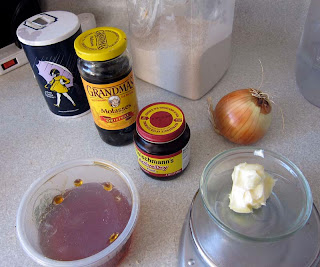 All mixed into a dough which rises once in a bowl. 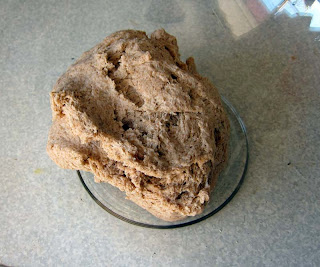 Then rises a second time after formed into the loaf. The end results are worth the effort, and it's actually very easy. 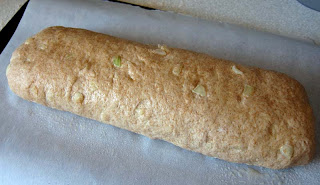 Posted by Birdernaturalist at 2:02 PM 2 comments:

Photo Highlights from Bolivia and Peru 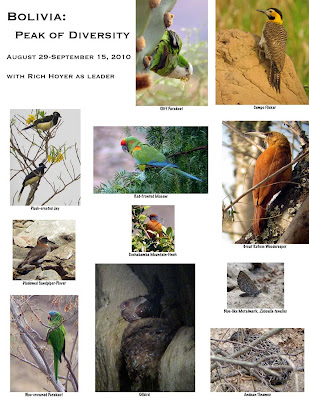 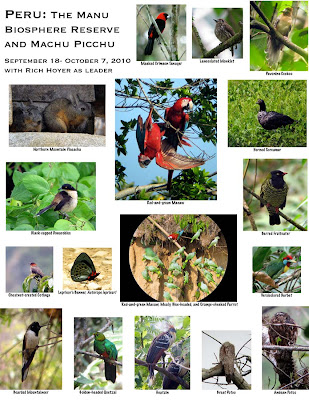 Posted by Birdernaturalist at 6:36 AM 2 comments:

I'm pretty much bound to the computer these days between tours, but I couldn't resist the invitation to join my friends Keith, John, and Jerry for a quick run over to Willcox to check the lake at the golf course, known as Lake Cochise. We had planned this trip a couple days earlier and were pleased that a Mew Gull (very rare in AZ) was reported from the day before we were to head out there.

Lost water birds are notoriously ephemeral at Willcox, so it was little surprise that there were no gulls at all this morning. But the birding was still good. While the numbers of shorebirds (such as American Avocets, Long-billed Dowitchers and others) and waterfowl were enough to keep us occupied, we were most impressed by an estimated 7000 Tree Swallows roosting on the mud and flying around the area. It was a spectacle to behold.

We checked a grove of trees as a possible vagrant trap a few miles east of there, finding an immature Gray Hawk – notably late and at an odd location. I managed to get this digibinned shot as it took off.

The grasshoppers here were abundant. Just a quick glance revealed four species, and there may have been as many as 10 if one looked carefully. The lovely pink one above is a color form of the Lakin Grasshopper, Melanoplus lakinus. This one below is the Two-striped Mermiria, Mermiria bivittata.

We also stopped to rescue this young Gopher Snake, Pituophis catenifer, as it was surely going to be smashed by the traffic. 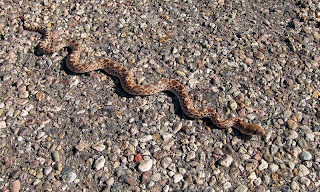 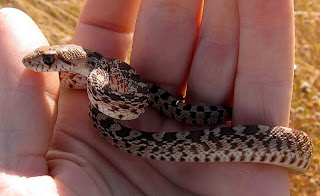 Posted by Birdernaturalist at 8:36 AM 5 comments:

The Nose of Brazil

My thoughts have been turning lately to my upcoming January tour to northeastern Brazil. I suppose the mental images most people have of this area – the "nose" of South America that reaches out into the Atlantic Ocean toward Africa – are as naive as mine were before I went to Maceió to learn Portuguese and scout the region for developing my first tour there. 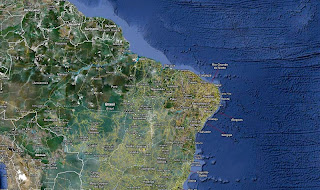 It seems so far removed from the rest of the American continents that just getting there must take weeks. Once there, you must be really out in the middle of nowhere, in remote wilds with no services. Actually...no. There are big cities here. Paved highways. Nice hotels. And some amazing birds. Maceió, with about a million inhabitants in the city proper is bigger than Tucson where I live. 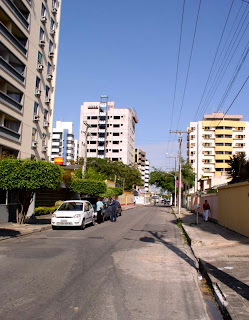 Inland from the coast, cities are smaller and farther apart, and the habitat drier, but there are still lots of people here. It's somewhat reminiscent of the SW United States, only with greater population density. Here are some Brazilian cowboys somewhere in the interior part of the state of Pernambuco. 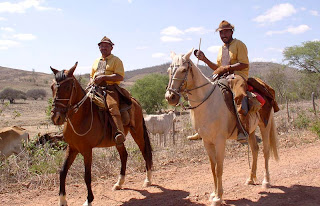 This Pygmy Nightjar was at a stakeout roost in central Ceará, a place I hope to be able to visit again this coming January.

Posted by Birdernaturalist at 11:48 AM No comments:

Laguna Volcan, Bolivia – Best Masked Ducks...and what is that on your plate? 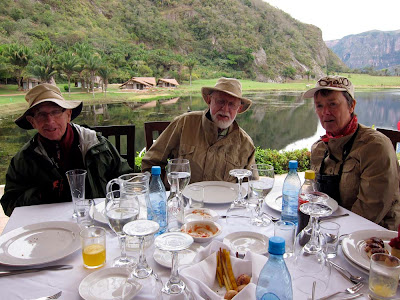 Despite the ongoing vegetation control, Laguna Volcan near Bermejo, Bolivia – just a couple hours west of Santa Cruz – continues to be one of the most reliable places for Masked Duck in Bolivia, and perhaps all of South America. And not a bad place to have lunch.

Once an untamed, lovely, overgrown lake, Laguna Volcan attracted only a few birders. I camped there with my friends Dave Lauten and Cathy Castelein in Feburary 2001. By August 2002, efforts were underway to build an "ecolodge," the first steps being to clear the area of "unsightly" marsh vegetation. In my private tour in August 2002, no Masked Ducks were to be seen.

Now there is a fancy hotel and cabins on site, even some golf holes. The Santa Cruz ultra-wealthy now come here for brunch and weddings. And it seems that the ducks have gotten somewhat used to the disturbance, though the continuation of vegetation control has eliminated the Black-capped Donacobius breeding habitat.

We ended up having lunch here on my recent Peak of Diversity tour, after having seen several Masked Ducks and amazing views of Rufous-sided Crake on the far side of the lake. I had lunch here just last year, but I had forgotten that the chef had attended some "food presentation" school. On the right are medallions of fish, in some dark sauce. The rest – well, you can use your imagination. 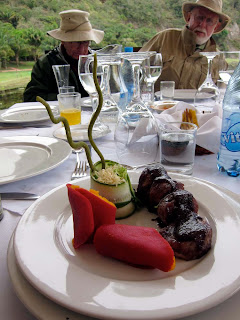 Posted by Birdernaturalist at 9:40 PM No comments:

Mammals may be the most difficult form of wildlife to photograph, rarely being numerous and almost always quite wary. On my tours, while I can get quite a few butterfly, bug, and flower shots, and once in a while a few bird photos using digiscoping, I rarely get to photograph mammals.

These two adorable creatures are the Northern Mountain Viscacha, Lagidium peruanum. Viscachas are closely related to the better known Chinchilla, another rodent from the high Andes which is now critically endangered in the wild. Normally found in rocky cliffs and boulder fields in the high Andes, a few pairs, like these, make their home in the centuries-old stone structures of Machu Picchu. I've seen them on every visit to this amazing place. 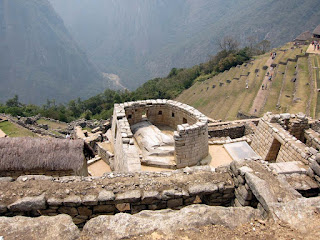 These mammals belong to a well-defined subset of rodents that originated in South America, with a few species spreading northward when the Panama land bridge closed about three million years ago. These rodents belong to the parvorder Caviomorpha with distant relatives in the suborder Hystricomorpha in Africa and Laos (see the video of Laotian Rock Rat first seen alive by one of my clients, David Redfield). It has been suggested that the caviomorph rodents are so distinct that they should be considered their own order separate from Old World and North American rodents, but more recent genetic information shows that they are indeed related to other  rodents.

A familiar member of this group is the North American Porcupine, which like the others 14 species of New World porcupines actually originated in South America. Most people also probably have heard of the Capybara, Hydrochoerus hydrochaeris, the largest living rodent. This one was a pet at Explornapo Lodge where I was leading a tour this past July. It and this dog were inseparable buddies. 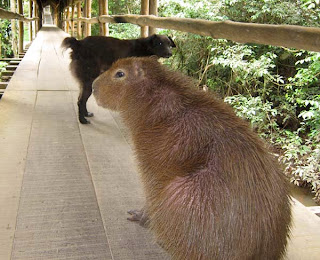 Another member of this group of rodents is the agouti, this one a Central American Agouti, Dasyprocta punctata. They are common in tropical rain forests, especially fragmented ones that have lost their big predators such as Jaguar and large eagles. In more remote areas where the big predators still exist, agoutis can be scarce and very wary. 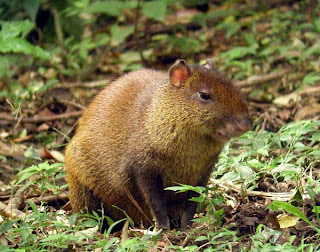 This is the Common Yellow-toothed Cavy, Galea musteloides, a close relative of the Guinea Pig. This one was on my recent Bolivia – Peak of Diversity tour near the Red-fronted Macaw preserve.

Surprisingly rat-like are another group of caviomorphs called spiny rats. They are in the same family as the Nutria and the social Degu from Chile. The only one I have ever seen was this Ferreira's Spiny Tree-Rat, Mesomys hispidus in my cabin at Chalalan Lodge in Madidi National Park, Bolivia several years ago.

Posted by Birdernaturalist at 11:28 PM 2 comments:

The Chestnut-crested Cotinga is an enigmatic resident of upper elevation cloud forests in the Andes from Colombia to Bolivia. Its distribution is spotty though, and even in areas where it has been seen, there can be months or years with no sightings. So it was quite thrilling to encounter at least six birds over two days in late September while leading the WINGS Manu Biosphere Reserve and Machu Picchu tour. It had never been recorded in the previous nine years that WINGS has offered this tour, and it was a lifer for me, despite my having birded many times in Peru and Bolivia where it is supposed to occur.

I made a short video of one which you can view at YouTube here. 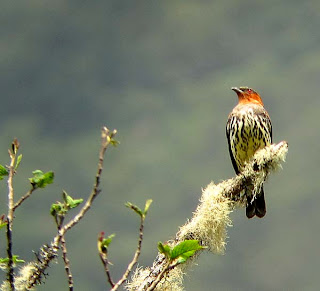 Posted by Birdernaturalist at 3:43 PM No comments:

Pyschedelic Katydid from the Manu Cloudforest

Until now I'd never seen a katydid that wasn't all green or some cryptic mottled brown. Tom Collins spotted this thing flying along as it proceeded to land on my rain jacket in the cloudforest above San Pedro on the Manu Road. I think we were all watching a Yellow-rumped Antwren at the time – a really good bird – and we all had to stop to admire this amazing orthopteran. Notice the long, filamentous antennae – one good clue that this is not a grasshopper. And also the long "horn" at the end of the abdomen – that's the ovipositor, signifying that this is a female. 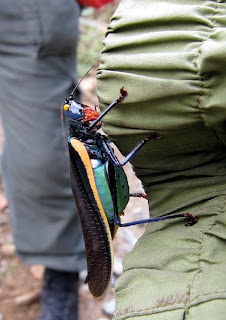 Posted by Birdernaturalist at 7:59 PM No comments:


My 19-day Peru tour is just about over – one more day of birding and then my overnight flight back to the US. It's been a terrific trip, with some interesting last-minute changes in the schedule, a great group of people (one of the best I've ever been with), and simply amazing birds.

Our day in the cloud forests of Manu National Park above Pillahuata were memorable, and this gorgeous Barred Fruiteater was one of many highlights. 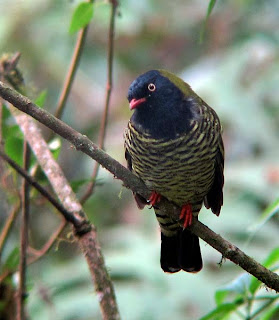 Posted by Birdernaturalist at 3:41 AM No comments: