I was in Mato Grosso Brazil earlier this month with my friend Doug Futuyma, sort of a scouting trip/practice guiding trip. I even saw a couple lifers.

Each evening we went over the list of all the birds we saw and heard, and I entered numbers on a spreadsheet on my iPad, trying to keep separate lists for each area we birded. This morning, after about 5 hours of working on it, the spreadsheet was ready to be uploaded to eBird – all 56 separate lists, and a total of 490 species.

One photo highlight below is the Crested Eagle that Doug spotted on a very distant snag from the New Tower at Cristalino Jungle Lodge on June 15th. I took perhaps 50 digiscoped images, and most were dross. Even this one is barely worth keeping, but it's the best there is. What made this rare sighting all that more memorable is that it came just moments after we watched a magnificent Harpy Eagle disappear into the distant canopy with what was probably a partially eaten young White-cheeked Spider Monkey. It was a great morning on the tower. 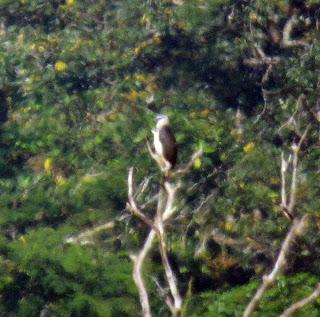 Posted by Birdernaturalist at 1:27 PM 2 comments:

I Gave A Talk!


Though I've been birding and guiding the past couple of weeks in Brazil, last night's event was foremost on my mind almost the entire time – the joint meeting of Oregon Field Ornithologists and the Western Bird Banding Association, at which I was invited to give the key note talk on the second night. 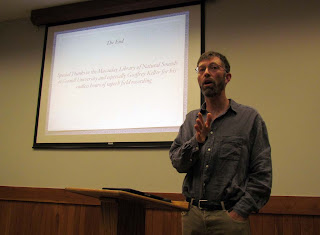 Despite my worries and not having a polished, rehearsed presentation, it went as well as I could have hoped, and I had fun. I presented sound recordings of a bunch of species that incorporate songs and calls of other species in their vocalizations, and there's lots to talk about there. It's a topic I've been fasciated by almost since I started birding 28 years ago. 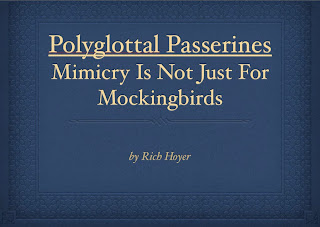 Earlier in the day I led one of the field trips, taking the four birders with me to the Lower Klamath National Wildlife Refuge and a bit into the Lava Beds National Monument. Our first stops were actually in Oregon where we saw an irrigated field full of White-faced Ibises and Ring-billed Gulls with one California and six Franklin's Gulls mixed in, and later a colony of Tricolored Blackbirds in a blackberry hedge. Our first stop on the California side of the border was a the monument's Petroglyph Cliffs where we saw hundreds of Cliff Swallows, one White-throated Swift, a pair of Prairie Falcons, and these young Barn Owls. 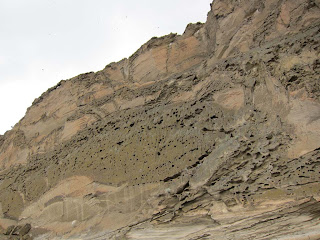 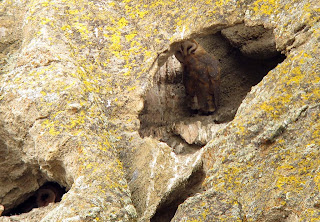 We finished with a drive through the auto tour route of the national wildlife refuge after  lunch at the headquarters picnic tables. Two surprises there were a Vaux's Swift well-spotted by Anne Heyerly as it dashed through hundreds of Cliff Swallows and a very out-of-place Swainson's Thrush foraging on the lawn with a pair of American Robins.


Posted by Birdernaturalist at 1:00 PM 2 comments:

Vocal Sacs on a Passerine!

I think the presence of vocal sacs – that is, bare patches of skin inflated during singing – should have been plenty of evidence to have placed the Black-capped Donacobius in its own family deacades or centuries ago. But museum ornithologists seemed to be hell-bent upon forcing this obviously unique taxon into already named families. So the donacobius has been called a wren, a thrasher, and who-knows-what. But when you actually experience the bird in the wild, you are quite aware this bird is like no other in the world.

Here, on the floating vegetation of an oxbow of the Rio Cuiabá upriver from Porto Jofre, Mato Grosso, Brazil: 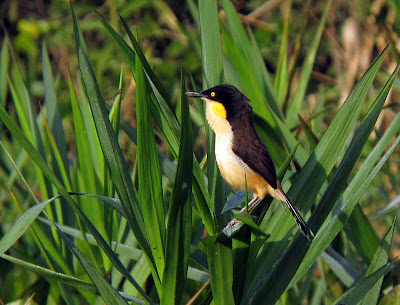 Posted by Birdernaturalist at 8:28 PM No comments:

Jaguar in the Pantanal!

I just got done birding for 3 days in the Pantanal with my friend Doug Futuyma. Long, bumpy, dusty (and sometimes muddy) roads led us to the middle of the largest freshwater marsh system on the planet. We then boarded a boat, had lunch in a "floatel," and after 2 1/2 hours of slow boating upstream I spied this face looking out at us from the bank. 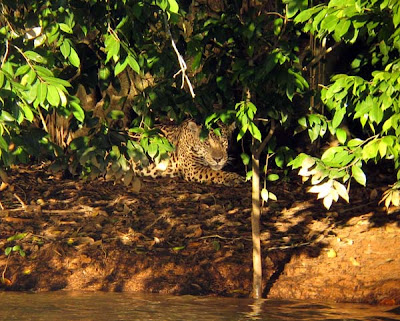 Posted by Birdernaturalist at 11:21 AM No comments:

Gambell Cooking – And a Little Birding

I'm sorry about absence here on my blog as well my ignoring all my e-mails this past week. I've been cooking for the WINGS group here at Gambell, Alaska (where there really is a view of Russia, not that Sarah Palin has ever been here).

I've gone a bit overboard, but we've come to the end of the week, and tomorrow afternoon begin the series of four flights that will get me home 18 hours later. I have little doubt that I'll sleep most of the way. Last year I slept more than 12 hours straight through on my first night off after this week of nonstop running back and forth in the kitchen. 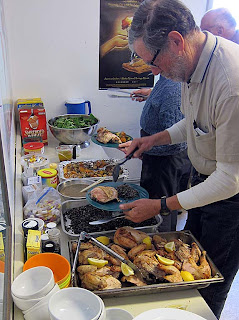 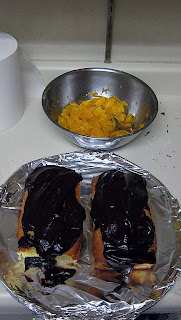 Posted by Birdernaturalist at 12:58 AM No comments: