The Three Corners of Rwanda


There are but three major protected areas in the little, densely populated country of Rwanda, and with several of my friends I managed to visit all of them this past week. It's been a blast.

This morning featured a short visit to Akagera National Park, an area of foothill scrubby forest and large lakes, marshes, and full of wildlife. Here are just three photos from the morning.

Levaillant's Cuckoo, a new bird for both Gavin and me. 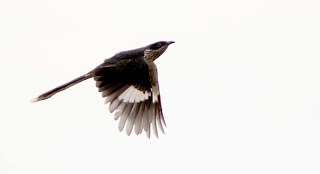 A Sulphur-breasted Bush-Shrike, one of the more colorful members of the family. 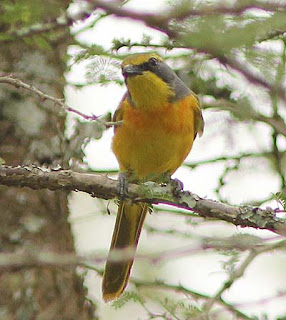 Klipspringer, an adorable antelope of rocky slopes. Notice how they stand on the very tips of their hooves, a unique characteristic of this species. 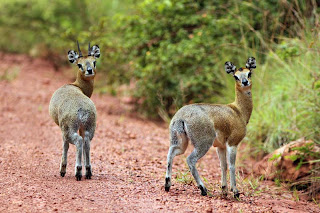 Posted by Birdernaturalist at 12:56 PM No comments:

Maybe my favorite bird after 12 days in Kenya was the Violet-backed Starling. They were common at the  camp a bunch of us stayed at near the Ololaimutiek Gate of the eastern Masai Mara reserve. 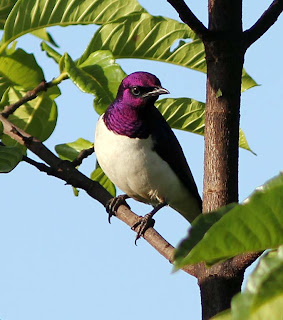 The real highlight so far was the most amazing wedding ceremony imaginable as 40 friends and family gathered to witness Mich Coker and Kate Galloway make their vows as Hippopotamuses belched in the river right next to us, a Green-backed Cameroptera loudly stuttered its song overhead, and a pair of hugemongous Southern Ground-Hornbills walked across a big savannah across the Mara River. (Yes, we were attending a wedding on the bank of the very river famous for the huge herds of migrating Wildebeest.) Cocktails at sunset from a hilltop perch in the middle of the wild savannah followed by a grilled dinner in a woodlot where Leopards neary could probably smell our meal topped it off. We were all blown away.

The big group has dispersed, but 19 of us have just arrived in Rwanda and are excited about the birding and tracking of Gorillas in the next couple of days.
Posted by Birdernaturalist at 1:58 PM No comments:

Birding Square Pegs Into Round Holes

It's a strange feeling not knowing the bird voices around you when your usual mental map uses sounds to figure out where you fit in this world.

My instinct appears to be to sift through all the chaos to find the familiar. Since nothing is familiar, here on the lodge grounds outside of Nairobi in south-central Kenya, I'm force-hearing House Wren, Warbling Vireo, and Pinyon Jay. And I'm certain I heard the distant "pi-peer!" of a Red-billed Pied-Tanager, as well as the distinctive rollicking duet of Plain Softtail and the sad whistle of a Cinereous Mourner. All first records for the entire continent of Africa. These birds weren't really here of course, but even today I almost managed to convince Mich, Clayton, Taylor, and Jason that we were hearing a White-eyed Vireo in Nairobi National Park while sitting in our Landcruiser watching Yellow-throated Sandgrouse, Kittlitz's Plover and a muster of Marabou Storks.

But then some bird song that is completely, utterly unlike anything I've ever heard before knocks me over the head and reminds me I'm on the other side of the planet, and almost EVERYTHING is different here.

For starters, there's the incessant, knocking "giddyup giddyup giddyup giddyup giddyup giddyup" from a little bird in the trees (Yellow-breasted Apalis); a deep, pure, marimba-like "doo doo doo" coming from the dense growth on the other side of the rocky gorge below my room (Slate-colored Boubou); and the bubbly, happy "lit..lit..lit..LITERATURE!" from almost everywhere (Common Bulbul). Then somewhat recognizable is the cheerful, yodeled phrases of what surely must be a thrush that sings, typically, well before it's light – but it's not any thrush I've heard before (Abyssinian Thrush).

Still a complete mystery is the pure whistle, pitched right on G5 (thanks, Virtuoso iPhone app), and repeated about 15 times, exactly once per second. (This might be a Tropical Boubou.)

I've been in Africa for 3 days now, and this morning my luggage finally caught up with me so I could upload some photos from the past couple of days. I'm at Masai Lodge on the outskirts of the city, right up against Nairobi National Park, and even this close to the city, it's almost an overwhelming introduction to the continent's bird and mammal life.

Since I've been going to the airport every morning to meet the 1:35 or 2:10 a.m. flight arriving from Istanbul, hoping to meet up with my missing luggage, I haven't gotten on a normal sleeping schedule, but the 3-4 hours of birding I've done the past two days have been plenty. Then early this morning my friend Cat Greene arrived on the same flight that my luggage was on, and we birded six hours starting at dawn around the lodge grounds.

Some photo highlights from the 100 or so species I've seen so far (only 4 of which weren't new):

Rock Hyrax are all over the place, waking up late and feeding on leaves in the bushes and trees planted around the reception and dining building. As I write this one is up in a tree, uttering its harsh, dry scream of a call. They are extraordinarily good climbers with special pads on their feet. 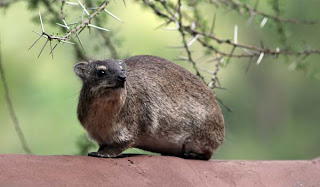 This is a Four-toed Hedgehog, a tiny thing that rolls up into a ball to protect itself. The spines really are quite sharp, and I handled it gently, though they don't come out like on a porcupine. It was in one of the planted circles just outside of reception. 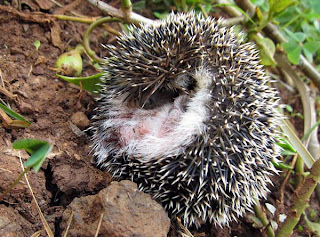 On my first morning, I forced myself to get up at 9:00 a.m. after 4 1/2 hours of sleep, went straight to breakfast, sat down, and saw my first sunbird in the tree next to my table. I had to look it up in the book, of course – Variable Sunbird. It's very common here and one of my favorites. 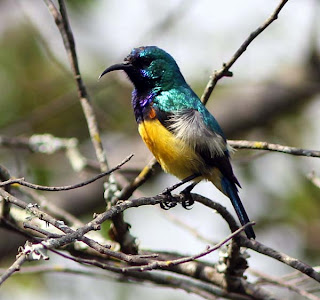 Today we had great views of Bronze Sunbird too. It was fun to see one foraging as a nectar thief in the giant flowers of a columnar cereus-type cactus. Kind of like the way our American orioles feed in blooming aloe. 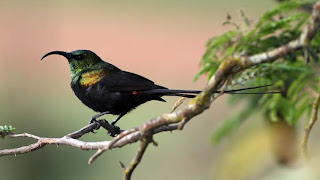 Cape Robin-Chat is also common on the grounds, foraging on the ground or sitting on a low perch givings sweet, thrush-like phrases. 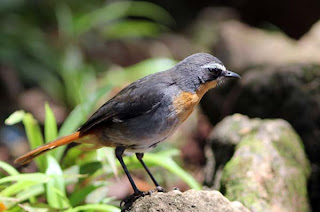 At breakfast this morning Cat and I had great views of a foraging Red-fronted Tinkerbird, a member of the African barbet family Lybiidae. It's amazingly similar to Picumnus piculets from South America, but the voice gives away a serious difference. This one sounds more like a pygmy-owl than any barbet. 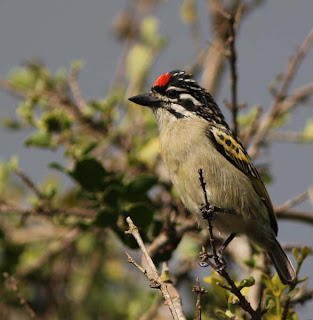 Finally, one last photo of one of my favorite birds here so far – Purple Grenadier. It was one of four species of ornate little waxbills we saw this morning. 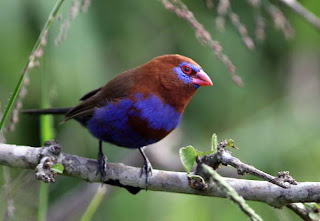 Other highlights from this morning were a mixed herd of 55 Baboons and 25 Impalas just on the entrance road to the lodge. We were already pretty overwhelmed with the morning's birding and thought we should head to lunch when we met one of the lodge staff outside the gate who advised us not to walk any farther as two female lions had been seen in the area. O. K. – to lunch it was! 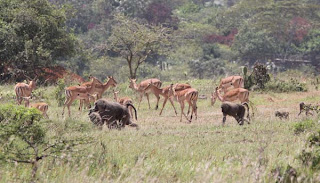 Posted by Birdernaturalist at 10:26 AM 2 comments:

This past week I was taken on a fam trip of NW Peru courtesy the Peruvian Government, along with 11 other birding guides, travel agents, and travel representatives. We actually got to do some birding along the way, and I finally caught up with the most unceremoniously named Rufous Flycatcher, a scarce endemic to NW Peru. I was in this same area with my friend Alan Grenon last year, but we couldn't find one. This is one of the birds that brought me to 1211 species in Peru, after just 5 trips in the past 2 years. What an amazing country. 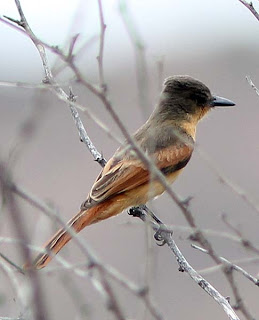 Stay tuned for occasional updates from my month-long trip through Kenya, Rwanda, and Tanzania with friends. I'm on my way there now!
Posted by Birdernaturalist at 2:35 AM No comments: