I participated on three Christmas Bird Counts this year – lower than my typical average of seven to nine, because I was away for 12 days for my Oaxaca at Christmastime tour in the middle of the period. There are still two more days left to this 2021-22 Christmas Bird Count season, but being weekdays, they weren’t chosen by many compilers. (If you’re reading this last minute, the Redmond CBC is being held on Wednesday, January 5.) Weather-wise it’s a good thing though; this last weekend saw relatively good weather, while today it’s raining cats and dogs nonstop, and that’s the forecast for the next few days.

My first CBC this year was the unofficial Tangent count that at least gets uploaded to eBird and offers data just as valid as any other CBC and covers a part of the Willamette Valley otherwise not censused. It was held on the first day of the period, a Tuesday this year, and it was the first real winter day after the passage of a wet, cold front. While on the cold side, it was free of the typical nonstop precipitation that can affect birding conditions. The day dawned clear, with ice on the roads, delaying our start as we drove very slowly to our area near Lebanon. But the view looking across the valley was incredible. This is Marys Peak as viewed from just north of Brownsville. 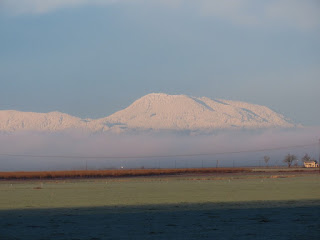 My birding companion for the day was John Sullivan. 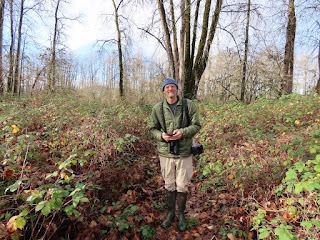 This Hermit Thrush was buffy enough in the face to have convinced an unwary observer of a unprecedented winter record of Swainson’s Thrush, but we heard it, then also saw the rufous tail. Hermit Thrush is the only Catharus thrush expected in the winter here. 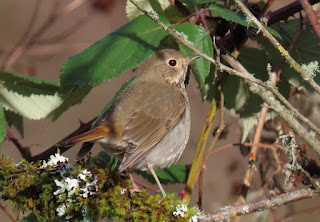 \We were excited to see this Red-tailed Hawk with wing tags. It’s now been more than two weeks since I reported it online, and I still haven’t heard from whoever tagged it. I’ll post an update if and when I hear back. 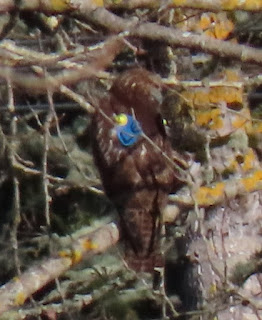 This Varied Thrush was quite a surprise in a very open park at Cheadle Lake on the outskirts of Lebanon. 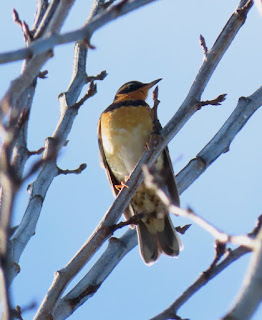 We finished the day hiking up Peterson Butte, an isolated mountain on the eastern edge of the Willamette Valley, offering a very unusual perspective and stunning views.

On December 18, two days before I left for Oaxaca, I participated on the Florence CBC with Magnus Persmark and Richard Turk. A front was approaching, and we experienced growing south winds over the day, but fortunately the rains didn’t arrive until after dark. We started by hiking north from the north jetty to the town of Heceta Beach, finding a flock of 31 Snowy Plovers, the only ones for the count. 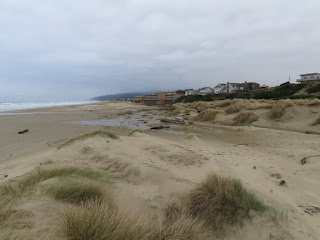 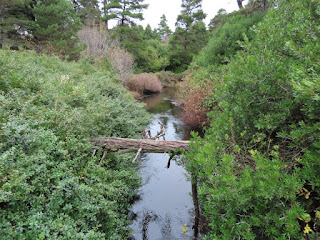 Amazingly adapted to the cold winter temperatures, Rough-skinned News (Taricha granulosa) were common along the roadway through the state park. 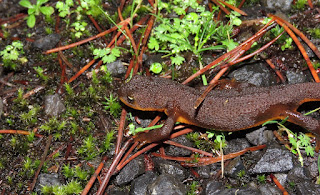 Finally, just yesterday, January 2, I participated on the Eugene CBC, covering the same area as last year, the single best spot being the private gravel ponds owned by RiverBend Materials, where we have special permission to enter. This year I had the spotting help of Richard Turk, who had been with me on the Florence CBC. Like last year, I got Soras to respond to call in response to playback from their haunts in large stands of cattail. These appear to be the only ones in the Eugene area in winter. Also a scarce bird in winter, this Orange-crowned Warbler was one of our better finds. 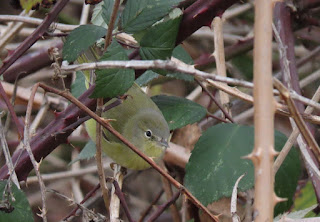 We had at least eight Bald Eagles, but it was hard to keep track, and there may have been several more. 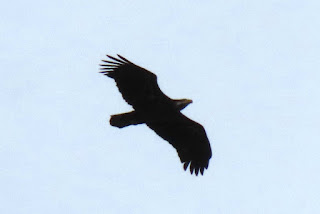 A trio of American White Pelicans soaring over the northern end of Delta Highway was an unusual sight. The local population typically stays very close to Fern Ridge Reservoir, several miles to the SW of us. 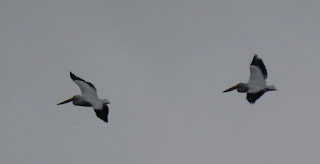 In the afternoon we covered Armitage County Park where we finally found some Bushtits. Typically in large flocks, this Bushtit was one of only two birds that came in very close. 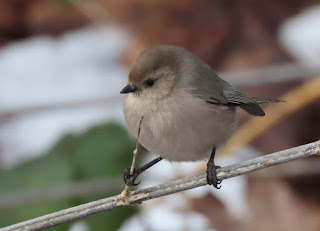 I almost had a fabulous shot of this Hermit Thrush in good light, but my camera wouldn’t focus, even though the entire focus rectangle was occupied by the bird. So I had to settle for this underexposed and grainy shot when it retreated to this shadier spot. 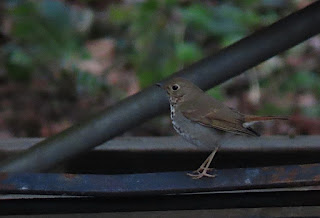 As I was bicycling out of the county park, I stopped for one last kinglet-chickadee flock to find this cryptic Hutton's Vireo hiding amongst the kinglets. Notice the blue-gray feet and the dark blotch breaking the top of the eye ring. 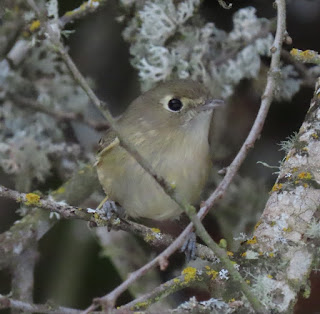 I made a very late afternoon check on one last gravel pit on my way home. I was surprised to see a big flock of about 20 Wilson's Snipes flush from the shore — then shocked as more and more kept flushing. I eventually settled on an estimate of 90 birds wheeling around, attempting to settle back on the shore and repeatedly flushing even though I was not closer than 50 yards away. 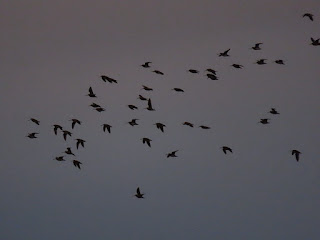 The current covid protocols prevented the classic CBC gathering at the end of the day, but the Zoom meeting was a suitable substitute, where we learned about fun sightings of Western Sandpiper, American Bittern, Barred Owl, Redhead, Barn Swallow, and Snowy Egret. 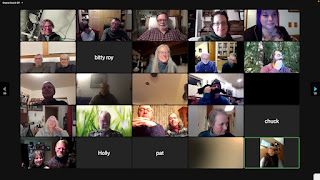 Posted by Birdernaturalist at 10:35 PM No comments: