I've been home in Tucson for just this past week between two tours – just back from the Maya Lacandon region of Mexico and now on my way to Hawaii.

As soon as I got home, the new Zeiss 85mm Diascope arrived (actually UPS tried delivering it three times while I was gone, and I was thrilled they came by a fourth time). Despite tons of post-tour stuff to do and the need to prepare for this next tour, I couldn't resist spending time in the back yard trying out the new scope and digiscoping adapter that Zeiss sent me.

I'll be posting more to BirdingBlogs.com in my usual Tuesday installments – both on my recent Chiapas tour as well as a review of this spotting scope and the digiscoping setup. In the meantime, here are some results of the digiscoping experiments in my back yard this week. Click on any photo for a larger image. 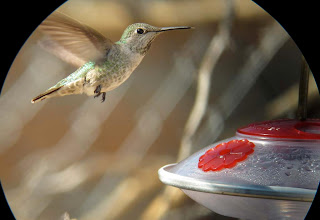 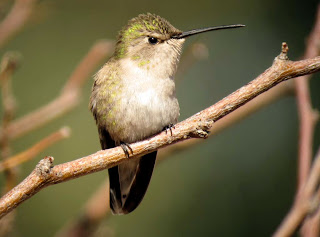 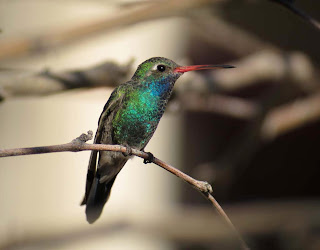 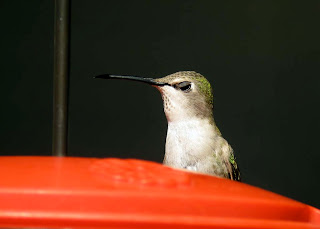 Male Violet-crowned Hummingbird (back for his fourth winter, and still here as of February 27, though he was missing from Feb 14-22) 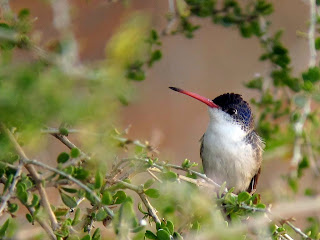 Posted by Birdernaturalist at 10:31 AM 3 comments:

A repeat of last year's show in which I helped out is showing again this coming Tuesday:

To find out which channel to tune to:

Freeze Burned Natives and a couple rare birds in Tucson

As I'm about to head into the mostly Internet-free zone of eastern Chiapas, Mexico, here's just a quick hodgepodge of photos from this past week around Tucson – a couple rare birds and evidence of the damage to plants from last week's hard freeze.

Just two days after the coldest day in over 100 years, I went on a short hike up The Phone Line Trail in Sabino Canyon with my friends Andrew and DuWane. 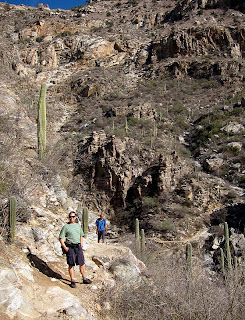 The vistas are wonderful. 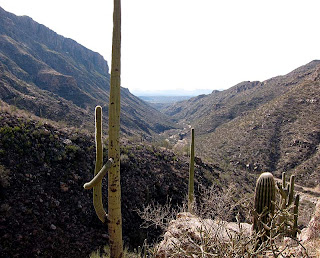 Here's a close-up of the freeze damage to the otherwise very hardy Spiny Hackberry, which is evergreen. You can see how the leaves in the interior of the bush survived with no damage, protected from wind. I suspect most of the outermost branchlets are still alive and will leaf out with the next good rain (whenever that might be, maybe not until July). 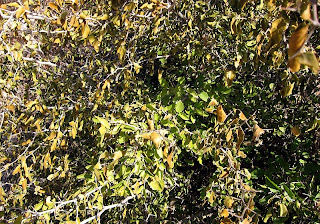 Even the outer half of each leaf of the Hopbush was freeze burned. 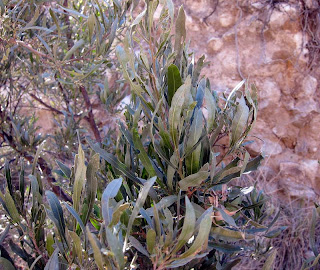 This is Arizona Spikemoss, Selaginella arizonica, known to a lot as "resurrection plant." It almost always looks like this unless wet from recent rains, so I suspect there is no freeze damage to it. 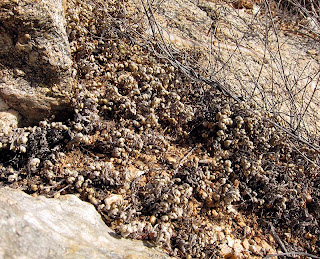 One of my favorite small native trees is Arizona Rosewood, Vaquelinia californica. Evergreen and apparently hardy to very low temperatures, it's found only in a few scattered localities, probably a relic of a widespread broadleaf forest that covered this area before 10,000 years ago. 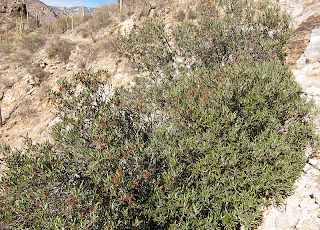 Amazingly, there were invertebrates present – lots of these Southwestern (or Echo) Azures (this one was actually in Pima Canyon a few days later), and a few Sara Orangetips. 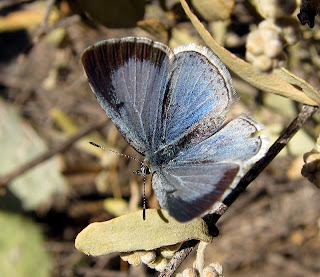 This is a darkling beetle, family Tenebrionidae. 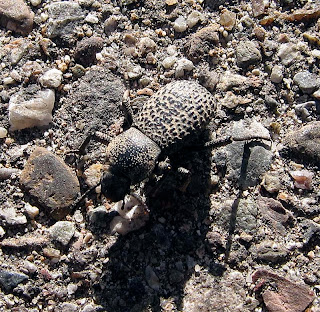 Finally, just a few more shots from the week. The giant (non-native) Indian fig or beavertail cactus in our yard was damaged severely by our 16°F morning on Friday, February 4 –  at about 10:00 am there were loud crashing sounds all over the yard as the ice thawed in the joints and larger, heavier branches came falling down. I had brought the hummingbird feeders in overnight and put them out before dawn for the two cold mornings we had. Even then, they would start to freeze before the sun was high enough to warm them up. 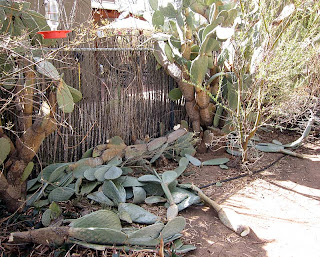 I spent a long morning at Sweetwater Wetlands just 4.5 miles west of me on Monday the 7th, making a thorough count of the water birds. (3380 Northern Shovelers!) I also enjoyed spotting some of the continuing rarities, such as this Black-and-white Warbler, amazed that it, along with the Yellow Warbler and the Summer Tanager that have been seen by many all winter survived the freeze. 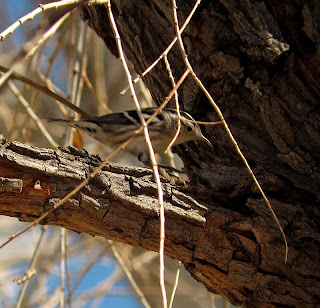 I was surprised to flush this female Indigo Bunting off the stream – a winter rarity that hadn't been reported here this winter. When it flew, it went far off to the east, so I suspect it is wintering nearby and comes infrequently just to drink and bathe. It's a bad photo, but you can see the warmer rusty tones of the back (not as grayish or buffy as Lazuli), and the distinct blue tinge to the tail. Breast center and sides were also brown with faint streaking. 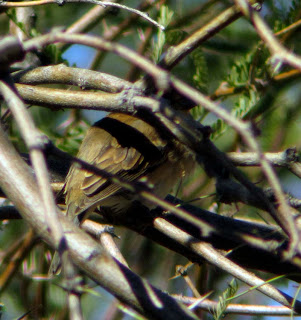 Posted by Birdernaturalist at 6:09 PM No comments:

This morning the Violet-crowned Hummingbird wintering in my yard in North-Central Tucson began singing a new song. I presume this is the advertising song – meant to attract a mate. I had just stepped outside about 15 minutes before sunrise to see if he was at the feeders already and heard this vaguely familiar repeated "squee" sound. I've heard it in Mexico or in Patagonia (Arizona), but it's been a long time. I ran inside to get my Olympus LS-11 and got this recording.

The much quieter "gurgle" song can be heard in this recording from last winter, and he's been giving it all the time. 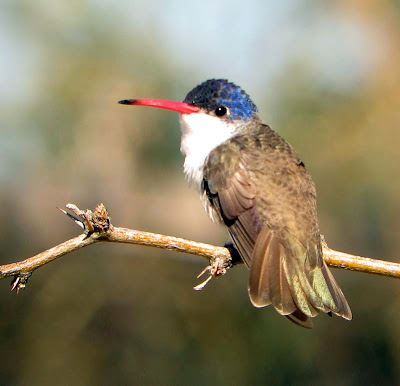 With the low forecast for 20°F in Tucson, I brought the hummingbird feeders in last night and then set my alarm for 6:45 a.m. (sunrise at 7:17) to set them out again. With very flat topography and virtually no gradient towards the Rillito River, this part of north-central Tucson is a cold sink, almost always about 5-7 degrees colder than the official low each day, and my 3-parts-water-to-one-part-sugar concentration starts to freeze somewhere between 26 and 28°F.

The official low temperature this morning was in fact 18°F, and with the gusty winds we had stirring things up all night and into the morning hours, we had exactly the same temperature at 3919 N Vine Ave.

Some Anna's Hummingbirds were already starting to chip and hover over the feeder sites when I began hanging the feeders, and the Violet-crowned Hummingbird appeared right at 7:00 a.m. Within an hour, the sugar water began to freeze, so I had to go out and add a little bit of hot water and shake them up until the sun got on them.

This Anna's Hummingbird has an unusual pattern of iridescence on the throat. I'm not certain if it's a male still molting in its helmet or if it's an older female. Most young males that have this much red in the gorget won't have it so symmetrical and will also have patches of elsewhere in the face and on top of the head, and most of them have virtually all of their adult plumage, so I suspect it's a female. 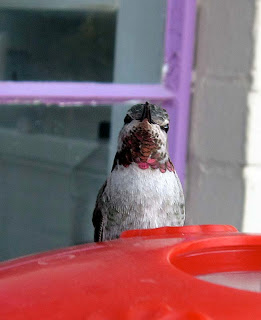 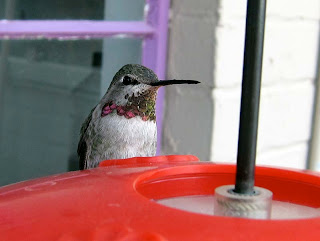 These are male Anna's Hummingbirds. I'm guessing around 20-40 different individuals utilize the yard's feeders, but that may be an underestimation. 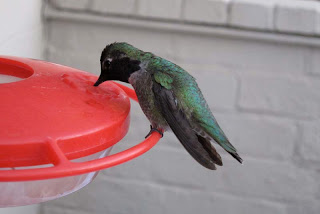 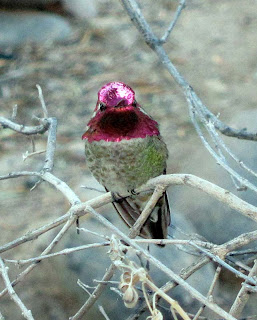 The Broad-billed Hummingbirds were the last to wake up and begin defending their feeders. There are at least two territorial males and 4-6 additional floaters (or more). This guy was still trying to get warm in the sun and let me approach within a few inches while keeping his eye on the feeder. 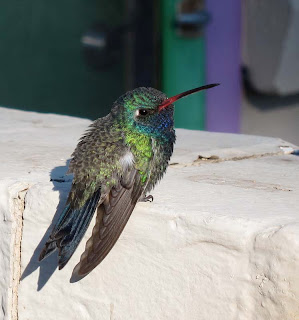 Finally, here's a series of digiscoped shots of the Violet-crowned Hummingbird from this morning. He first showed up October 16 this year, has occasionally left the yard from two days to three weeks at a time but has been back now for two weeks and defends two feeders full time. He allowed much closer approach this morning, choosing a new perch in the open that allowed him to view both feeders at once. I think he know how important the food supply was in weather like this. 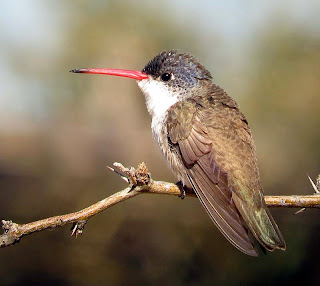 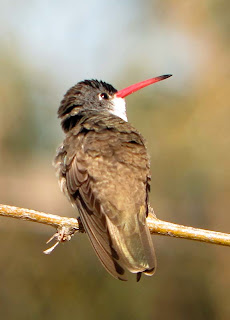 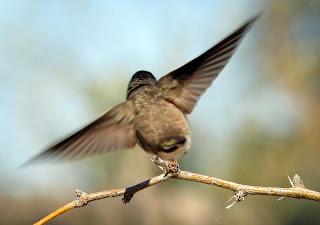 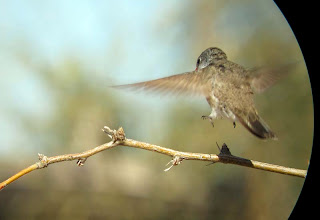 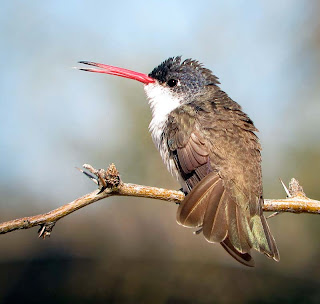 The forecast low for Tucson is 18°F tomorrow morning...and no wind. So we could very well get down to the low teens. The coldest temperature we've had here in the nearly 13 years I've lived here was 17°F on January 15, 2007.
Posted by Birdernaturalist at 12:22 PM 1 comment: