Passiflora mexicana and Gulf Fritillaries in the Yard

I was home for just three days after my Mato Grosso tour – just enough time to see some dear friends, sort and open mail, and get the bulk of my post-tour chores done; but not enough to make a trip to the laundromat. I did walk around the yard from time to time and enjoy the hummingbirds at the feeders and migrants stopping by.

What I particularly enjoyed is my Mexican Passionflower, Passiflora mexicana. I have a vague memory of sowing several seeds of this and several other natives all over the yard when I first moved here in May of 1998, but do I recall being surprised to see this vine some three to four years later. It’s now a fabulous, lush summer delight, growing more and more stems each year. This year it is even putting up sucker sprouts a few feet away from the main caudex, on the opposite side of the venerable Velvet Mesquite it uses as its main support. It seems to have claimed this location as its permanent home. 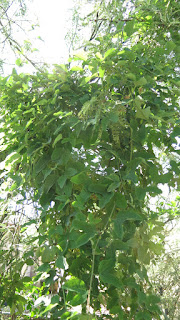 One might not even notice this plant except for the mid-August stench of the blooms. They have a strange mildewey, powdered milk sort of rank, heavy smell that doesn’t exactly you make you wretch, but you don’t seek to discover the source more closely either. The flowers are very small for the genus but lovely nonetheless. 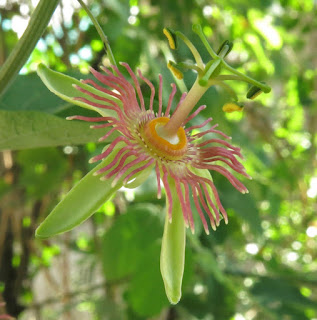 Gulf Fritillaries just barely manage to find and develop on this native. Several years ago when this plant was still young, I planted a non-native Passiflora cerulea as a decoy to keep them away from my native gem, and they went crazy on it, eating the stems and all to stubs, and many caterpillars made it to adulthood. Meanwhile, this native species only draws a couple individuals and caterpillars each year. I found just three caterpillars on the many meters of lush growth this time. 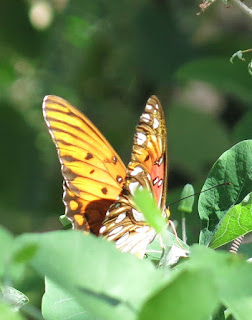 Maybe the smell of the flowers distract them. But it’s possible also that these pale spots on the leaves look like eggs, discouraging the adults from laying. 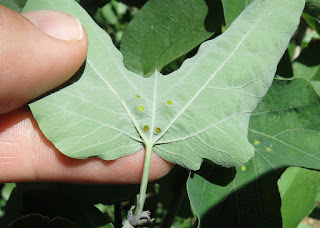 Here’s an egg from the lone butterfly that was visiting on the day I took these photos in late August. 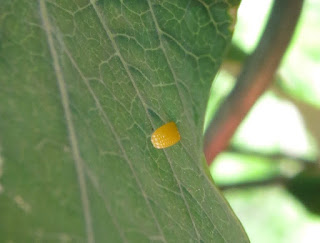 Posted by Birdernaturalist at 10:48 PM No comments: