Lest everyone reading my blog think all I do is bird, butterfly, and bug my way around the world, I do have some seriously domestic interests. I guess you have seen some of my cooking and baking here.

But this time it's gardening, something that my life of travel doesn't let me do much of. Since my next series of tours isn't until February, I decided to put in a winter vegetable bed. It probably pains many of you who are now putting your gardens to sleep for several months of winter, but this is the time of year we get spring fever in SE Arizona. 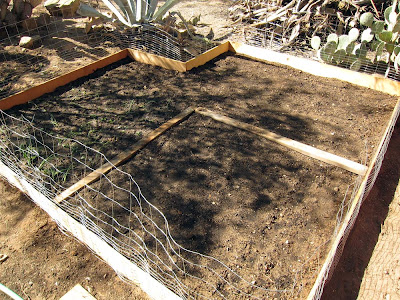 With the help of my friends Jake, Gavin, and Irene, some trips to the lumber yard, home improvement stores, and an green waste depot brought me all the supplies I needed. The last touch was the rabbit-proof fence (we have Desert Cottontails in the yard), which I hope will also keep out the chickens (yes, we have 8 chickens in the yard).

Already in August I ordered some seeds from Nichols Garden Nursery in Albany, Oregon, my favorite source for heirloom varieties as well as newly developed ones well adapted to cool climates and short seasons. I finally got the bed prepared and seeds sown just yesterday, about a month later than I should have.

My friend Greg Corman also gave me starts of kale, chard, two kinds of arugula, and some i'itoy, the native onion of the Tonoho O'odhami

I'm putting in a bed of sweet peas under my bedroom window, and I'll start some night-scented stocks as well.

In about a month I'll start some seeds indoors for early planting of two kinds of tomatoes and ground cherries. Can't wait.

It was also an interesting bird & bug day. At dawn, two Savannah Sparrows ended their overnight migration by stopping in a mesquite tree in the yard and wondering where one might find a good patch of grass to hide in. I directed them towards the U of A farm down the road. Then this noctuid moth in the gigantic and confusing genus Euxoa camped out on the sill by the front door all day. 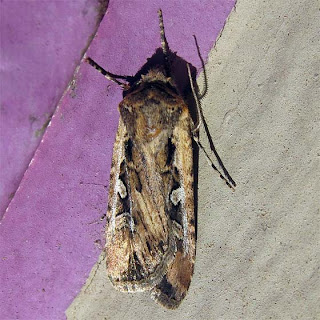 Posted by Birdernaturalist at 10:15 PM No comments: 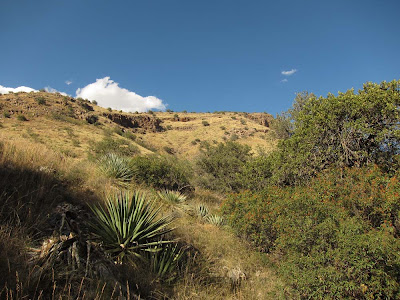 This past Saturday I did a short botanizing/birding/bugging hike up French Joe Canyon east of Tucson with my friend Greg Corman. Greg, owner of Gardening Insights is a botanist, landscape designer and artist who has been with me to Bolivia a couple times on our “birds & botany” tours. We could have spent all day in a just 100 meters of the canyon, but I was itching to get the "upper spring."

French Joe is a special place. Just south of Kartchner Cavers State Park, it drains eastward out of the Whetstone Mountains, a largely limestone uplifted range. It became famous among birders in 1995 when John Martin found a singing, territorial Rufous-capped Warbler in the upper part of the canyon, a good mile hike after a very rough entry in a high-clearance vehicle. That same year a second territorial bird was found, and then in subsequent years a lone male continued, and then after a couple years was then joined by a female, and they bred for a few years until the upper spring dried up in the early oughts.

On the rough drive in, I yelled for Greg to stop for a lizard – and I was able to sneak up and get a closeup of this juvenile Eastern Collared Lizard. 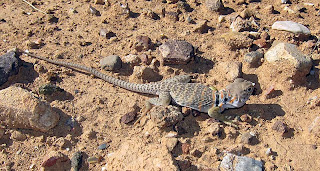 We stopped just before the end of the road, as the last 100 meters or so passes through a lovely woodland, the Western Soapberry thickets adding some authentic fall color. 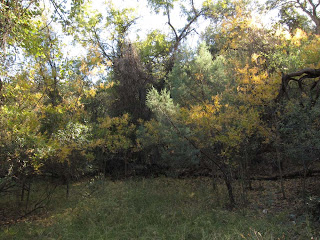 The slope, exposure, drainage, and geology all conspire to make this a very interesting place botanically, reflected very closely in the invertebrate life as well. In the understory of the lower copse is a healthy patch of Arizona Orange, Choisya dumosa var. arizonica, a member of the rue family (same as citrus). 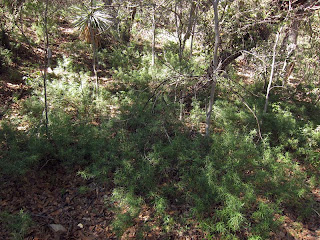 The variety of composites (plants in the family Asteraceae) had me on my toes. I keyed out seven, using the only key that has all the species: the dreaded Kearney & Peebles. The first one I tackled had me in a tizzy, as it just wouldn’t key out. It turns out there is a fatal error in the already atrocious dichotomous key in this ancient, utterly illustration-free tome (1960). If you happen to have a Coreocarpus without any pappus on the achene, you’re out of luck; that genus does not appear in the key for Asteraceae with ray flowers and no pappus. But I persevered, tried other keys, and arrived at: Little Lemonhead, Coreocarpus arizonicus var. arizonicus. This one is populated by the pretty little buprestid beetle Acmaeodera amabilis. 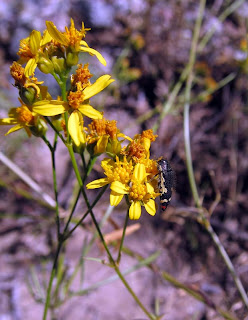 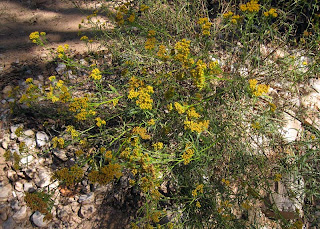 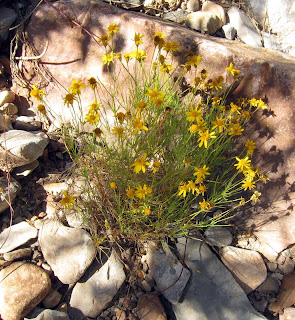 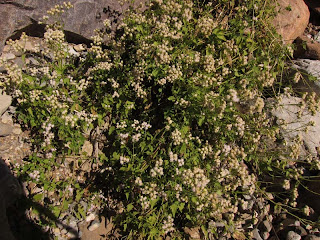 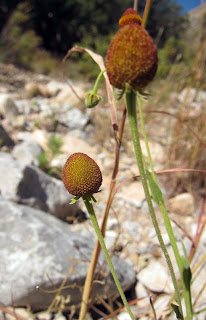 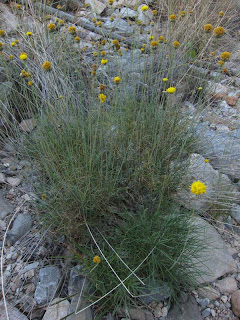 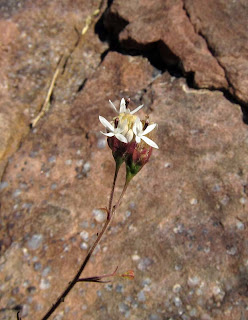 I do key out other plants from time to time. This is Ipomoea cristulata, Transpecos Morningglory, this individual notable for having sprouted, put out one pair of true leaves above the cotyledons, and bloomed. Hurry! 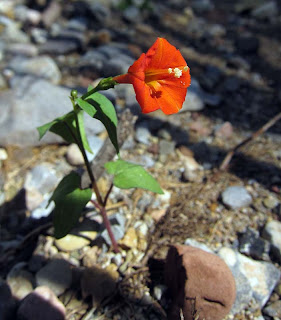 Broom Milkwort, Polygala scoparioides from the odd family Polygalaceae. I once tried to key one out in the pea family and nearly killed myself (and everyone else in the room). Then I figured maybe it wasn't a pea. 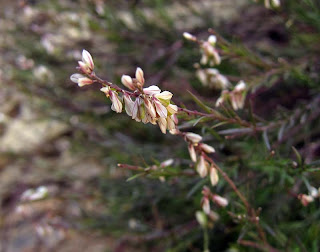 I had no idea we had another ceanthous here in SE Arizona. Desert Ceanothus, Ceanothus greggii var. perplexans 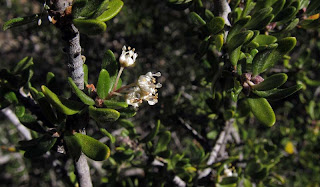 For a brief dip into Animalia, we saw a few Arizona Giant-Skippers, Agathymus aryxna
Jim Brock informs me that this is Poling's Giant-Skipper, Agathymus polingi, after all. That's the one I had been hoping to see! 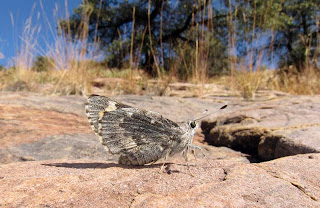 I recognized this caterpillar as one of the dull hooded owlet moths. It looks a lot like an eastern species (Cucullia convexipennis), but the wizards at bugguide.net haven’t chimed in yet: Cucullia sp. Lovely in any event. Stay current with my buggguide post here. 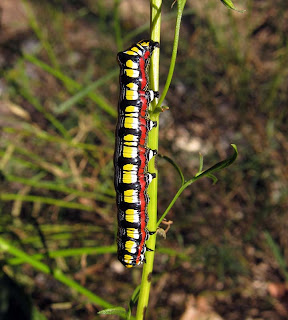 Oh, I almost completely forgot: once we got to the upper spring, where bird activity was very quiet, we found that there was some surface water in one pool where 10 years ago there had been a trickling stream. Better than nothing (the rest of the canyon was dry, save for one pool in the lower woodland). So I pished and imitated Western Screech-Owl, hoping to attract something more than the 2 or 3 Chipping Sparrows that had come in for a drink. In came more Chipping Sparrows, a Bridled Titmouse, a pair of Bewick’s Wrens, a couple Ruby-crowned Kinglets, a Hermit Thrush in the undergrowth (they love the sumac berries in abundance here), and then on top of a bush over the pool a yellow-breasted bird. I didn’t even lift my binoculars and got Greg to look – a Rufous-capped Warbler! There hadn’t been one reported from here since August 2008, and before that, May 2004. Has there been one in residence ever since John’s discovery in 1995? The Rufous-cap came in quietly, briefly appeared wren-like in the middle of the bushes only 4 feet in front of us, and moved on. What a thrill.
Posted by Birdernaturalist at 9:15 PM 1 comment:

While at the Buenaventura Reserve in southwestern Ecuador late last month, I was pretty impressed with the huge, unblemished leaves of this plant overhanging the old road. 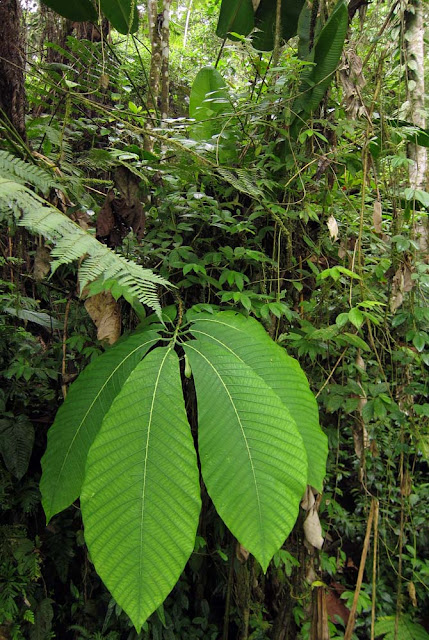 I first guessed that it might be part of some tree, or perhaps a seedling. 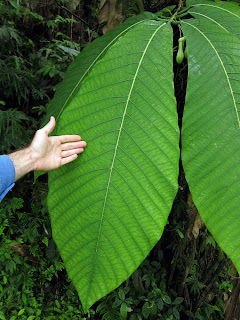 Then imagine how floored I was to take a closer look and see that the flowers hanging from under the umbrella of foliage were those of a passionflower! 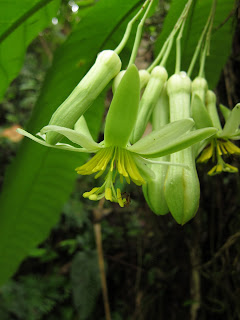 Most members of  this family and genus are vines with rather proportionally-sized leaves, nothing like this plant. Not having any sort of flora for Ecuador, I relied upon Google to find the name. I took the WWJD approach to botanizing: I googled "Passiflora megafolia." Nope. Then I tried the slightly less imaginative "Passiflora macrophylla." Bingo. It turns out that one botanist tried naming it "P. gigantifolia," so I was that far off at first.

To those who might wonder: I did not collect any seeds, sorry. There were no ripe fruits in any event.
Posted by Birdernaturalist at 9:12 AM No comments: 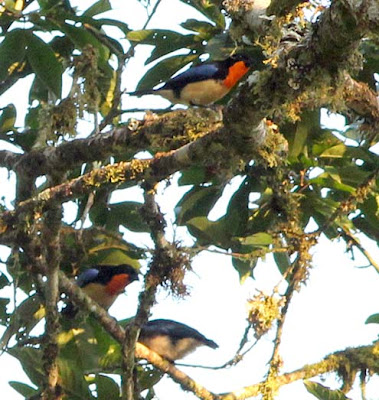 Things have sure changed. There's been a decent dirt road most of the way there for a few years, and only in the past two years the road been improved and extended, a bridge built, and more improvements are on the way. And Yankuam Lodge is only a few minutes from where these birds are. As a result of the improved access, birders have been making quite a few exciting discoveries here recently. White-bellied Pygmy-Tyrant was one of the most unexpected, but Gray-tailed Piha, Royal Sunangel, Zimmer's Antbird, and puzzling Tolmomyias flycatcher are among the other goodies.
Posted by Birdernaturalist at 9:59 PM No comments:

Here's a teaser from the hundreds of photos I have yet to go over from my month of scouting in Ecuador and Peru. 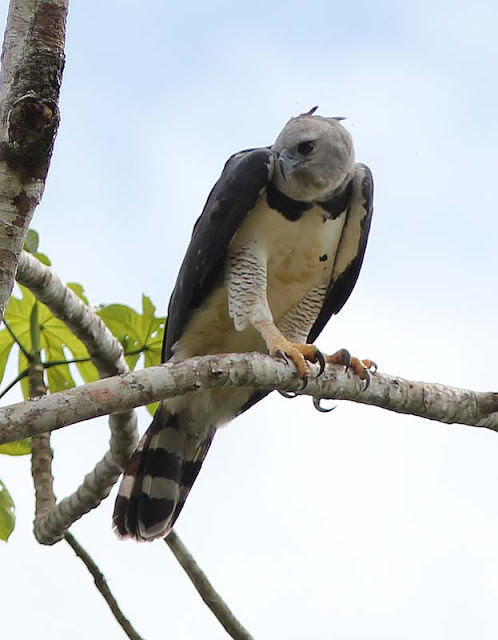 This Harpy Eagle, probably a male, from our impressions of its less-than-gargantuan size, was in a cecropia tree above the banks of the Los Amigos River in Madre de Dios, Peru, about 25 minutes downstream from the CM2 research station belonging to ACCA, the Asociación para la Conservación de la Cuenca Amazónica.
Posted by Birdernaturalist at 4:35 AM No comments:

196 species on an unplanned Big Day

It's my last day in Peru, in the middle of a furious tropical storm. Yesterday was quite different at the CICRA station at Los Amigos reserve. I started the day at 4:00 am with a South American Tapir walking across the soccer field. After breakfast Sam Woods and I continued birding trails and finished the day -- all on foot, and within about 1 mile of the station -- with 196 species. Had we not taken time for meals, some very common birds in the open areas would have easily put us over 200.
Posted by Birdernaturalist at 3:52 PM No comments:

Sure enough, I've been without Internet the past week here in southeastern Peru. We're still in a remote research station, but a mining town nearby has a cell tower. I'll be home in 3 days, with tons of photos and recordings to go over, label, and file. Today's booty on the Los Amigos River was a Harpy Eagle, perched in a cecropia. Photos should be good. Two days ago we saw a Short-eared Dog on one of the trails here.
Posted by Birdernaturalist at 11:38 AM 1 comment: