Doing a little (ok, very LONG) slide show on Cristalino Jungle Lodge last night for a group of bug-interested friends was a great way to relive some of the exciting moments during my 10 weeks as a local guide there last year.

One of the more thrilling events came as a blur of commotion in the rainforest understory near the Saleiro. Normally the forest is a very quiet place, with the occasional bird song overhead and the often a drone of cicadas. This commotion involved squealing, something running in the leaf littler, and branches moving, and my heart was pounding. I looked up to see a Tayra running towards me then run up a tree, and something behind it on the ground. I focused the camera through the branches and snapped this shot. (Don't forget you can click on the photo for a larger image.) Tayras are large weasels, widespread in the American tropics. 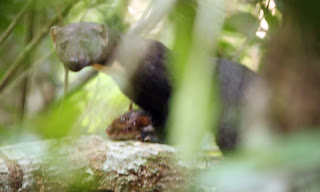 Then I saw what was on the ground – this adult Red-rumped Agouti, very agitated, stomping, darting around, but not in any hurry to get out of there. 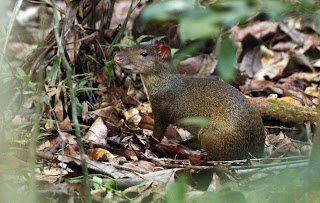 Then I saw some movement in the background, and a second Tayra hopped onto a low log and began pacing back and forth. 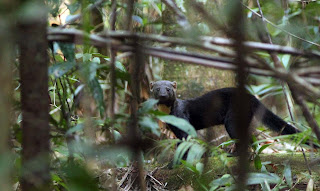 Only after I saw that the first Tayra had a baby agouti in its grip did I realize that the adult agouti was trying to chase them away from its nest. I wondered if it had any more to defend but never found out. Once the Tayras realized I was there, they quickly melted into the jungle. I saw Tayras only two other times during my 10 weeks at Cristalino, making it perhaps the commonest forest predator in the region, though they frequently dine on fruit. I've seen them eat Cecropia fruits up high in trees as well as nab bananas from bird feeders.
Posted by Birdernaturalist at 2:17 PM 4 comments:

Yesterday was the day to look for Rufous-backed Robin with my visiting friend Alan Contreras. We first went to the closer spot where one had been seen – Florida Canyon in the Santa Rita Mountains. We waited and walked around, as did about 15 other birders, and by 10:20 still no sign of the bird. So we drove 1 hour and 20 minutes east to the town of St. David where two had been seen in recent days. We scored after about 20 minutes of searching. Here are two shots of one of the birds. 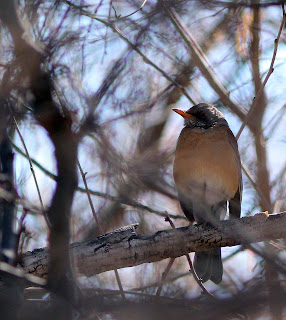 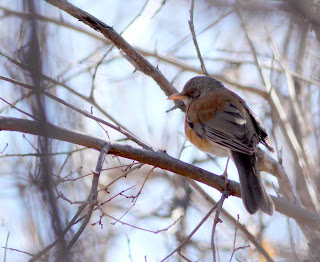 Posted by Birdernaturalist at 5:23 PM No comments:

When Life Gives You Lemons...

...make limoncello. I'm joining this fad a little late, as I first had homemade limoncello over two years ago, made by my friend Maribeth Morehart. Since then I've had limoncello made by three other friends, including a heavenly example just a couple nights ago (which friend, incidentally, made his own bitters with some 40 ingredients).

So when I came across a pile of pruned branches in an alley near our house ready for the brush-and-bulky trash pickup, I was amazed to see them loaded with about 50 Meyer lemons, a sweet, thin-skinned lemon hybrid originally from China. I promptly returned with a bag and picked them all, giving a few to a couple neighbors. 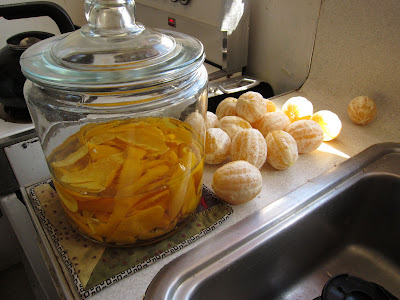 I've washed and peeled the lemons, then carefully scraped off all the white pith to avoid any bitterness. All goes into the large glass crock I bought at Cost Plus ($14).

I'll let it steep out of sight in a cupboard for about 3 months, then strain off the peel and add about 4 cups of simple syrup. Done. Best served ice cold or splashed into sparkling wine or drizzled over ice cream.
Posted by Birdernaturalist at 3:17 PM 1 comment:

I just came across this photo today, not having had the chance during my last month in Africa to go over each day's hundreds of shots. I just had to share. This was in Volcanes National Park in northwestern Rwanda on the day after Christmas. Mostly the gorillas ignored us, clearly bored of humans by now. But this mother with her two-month-old kept an eye on us. Click on the photo to see the full size. 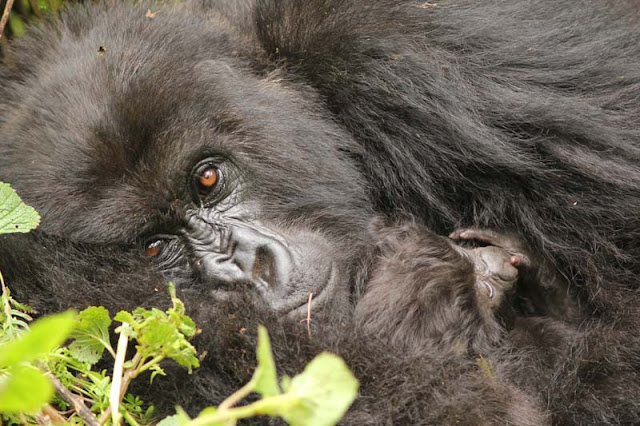 Posted by Birdernaturalist at 8:30 PM No comments: