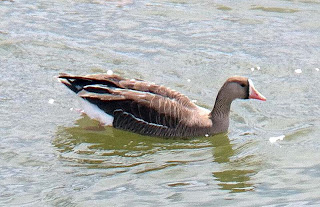 I had a great day yesterday (Saturday, April 23) with my birdathon team of Moe Bell of Scottsdale and Mark Cassidy of Seattle who very capably got on birds and did a great job of keeping track of the bird list and timing of stops. The final species tally for our was 174 species, one short of the target. Only three of the birds (1.7%) were seen by one person only, well short of the 5% rule for big days. Our team also raised about $1000 for the Tucson Audubon Society.
Our first bird of the day was LESSER NIGHTHAWK at a stoplight just as we were about to ascend the Mount Lemmon Highway. After completely dipping on Northern Saw-whet Owl and Spotted Owl, we decided against spending too much time to see the FLAMMULATED OWL that was calling so persistently at Rose Canyon but got luckier with a WHISKERED SCREECH-OWL that flew between Mark's and my faces in response to my whistles. A WESTERN SCREECH-OWL farther down the road was nearly as cooperative. We heard at least 3 ELF OWLS right at dawn, just in time as the diurnal birds had already begun to sing – BLACK-THROATED SPARROW, CANYON TOWHEE, CASSIN'S KINGBIRD, and the season's first BROWN-CRESTED FLYCATCHER.

The Bickel feeders were a bonanza, with our only BROAD-TAILED HUMMINGBIRD and MAGNIFICENT HUMMINGBIRD, WHITE-BREASTED NUTHATCH, and a migrant TOWNSEND'S WARBLER. RED-FACED WARBLER at Bear Wallow was a lifebird for at least one of the guys, so we paused to enjoy them before dashing off. We couldn't buy a Plumbeous Vireo at Bear Canyon, but we did get lucky with ARIZONA WOODPECKER, BRIDLED TITMOUSE, and VIRGINIA'S WARBLER there. If I had known about the Evening Grosbeaks that Scott and Erin found, I would have definitely detoured for such a great county bird.

All of the Tucson-area waterfowl were there there and happily added bonuses – Lakeside Park's GREATER WHITE-FRONTED GOOSE (digibinned above, using my iPhone held against my binoculars), Reid Park's SNOW GOOSE and ROSS'S GOOSE, and Kennedy Park's CANADA GOOSE. A NEOTROPIC CORMORANT and a few BLACK-CROWNED NIGHT-HERONS at Reid Park were also stakeouts. 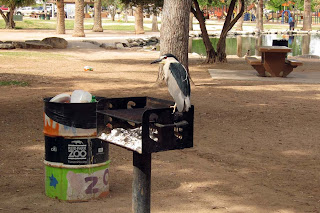 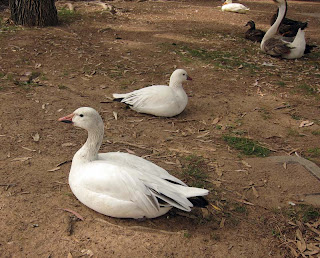 Benson Sewage Ponds had our only LESSER SCAUP, FRANKLIN'S GULL and a late BELTED KINGFISHER.

Willcox was good, but had apparently been better in the past couple of days – no gulls, Marbled Godwit, Long-billed Curlew, Sanderling, Black-necked Stilt OR yellowlegs of any kind. But we did get a surprise drake NORTHERN PINTAIL here, and the WILLETS, WILSON'S PHALAROPES, AMERICAN AVOCETS, and WESTERN GREBE were good stakeouts.

The wind picked up in the afternoon and destroyed our chances for grassland birds, so Grasshopper Sparrow and Cassin's Sparrow were unfortunate misses.

The VIOLET-CROWNED HUMMINGBIRD and a female RUFOUS HUMMINGBIRD were at the Paton's, but we didn't linger to see if the Calliope would show up.

The Rio Rico pond had the increasing flock of BLACK-BELLIED WHISTLING-DUCKS, just one WHITE-FACED IBIS, and our only GREEN HERON.

The flooding fields between Palo Parado Road and Tumacacori were extremely birdy, and AMERICAN PIPIT there was a nice surprise.

A brief stop at the Amado Sewage Pond is always worth the detour, and this resulted in a drake GADWALL which had not been there in past days – making for a clean sweep of the dabbling ducks (except the Wood Duck). The two Snowy Egrets I had seen there just two days earlier were gone.

The fruiting mulberry trees at Continental (which had Cedar Waxwing for us two years ago) this time provided our only WESTERN TANAGER and (surprise) CURVE-BILLED THRASHER (we would have spotlighted the nest in my yard if we had missed it during the day).

We ended right on schedule with an hour and a half stroll at Sweetwater Wetlands, which added a whopping 9 birds to our list. The reported Solitary Sandpiper and Black-necked Stilts were nowhere to be seen, but we had good views of a SORA, VAUX'S SWIFTS with the swarms of swallows, GREAT EGRET, two SNOWY EGRETS (maybe the two missing from the Amado sewage pond?), and a NEOTROPIC CORMORANT. While scanning the swallows for the first arriving martin, I spotted two WHITE-THROATED SWIFTS, which we had missed in the Catalinas as well as at the Roadside Rest. Our final species was the WESTERN WOOD-PEWEE, which others had apparently seen, and which we would have missed were it not calling. We gave another shot for the Harris's Hawk before enjoying the LESSER NIGHTHAWK spectacled (400-500 birds) from the Camino del Cerro Bridge.