Promoting and organizing the Tucson Valley Christmas Bird Count has taken up most of my time since I got home from my recent Yucatan tour.

Now that the more than 110 participants are assigned areas and team members and that the countdown potluck details are more or less settled, I've been scouting areas I don't know well and staking out rarities. It's looking good for getting a near record number of species. Last year we set a new record with 153 species. Tension is building!

No one had reported Bronzed Cowbird to eBird in recent weeks, so today I promptly found a small number just about 300 yards from my front door at the U of A farm on Roger Road, where in the past I've found up to 30 or more in the winter. Then about a mile farther east I found another group of about 30. I think we're safe with that one. I found a Townsend's Warbler as well, a very rare bird here in the winter. But what about Brewer's Sparrow, which was seen only in small numbers in one area just today? Or Neotropic Cormorant, which has gone unreported for two weeks but was seen today but only in flight? Red Crossbill? Pine Siskin? Will the staked out rarities perform – Broad-tailed Hummingbird, Louisiana Waterthrush, Black Scoter, Red-shouldered Hawk, Pine Warbler, Yellow Warbler, Wilson's Warbler? What about the reported Barn and Northern Rough-winged Swallows?

I can hardly stand it. 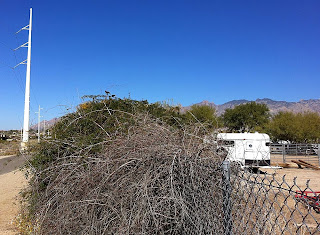 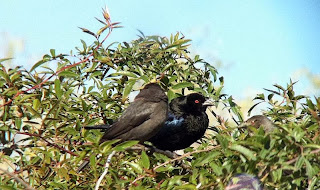 Posted by Birdernaturalist at 10:01 PM No comments: