Blooms, Bugs, and Birds in the Yard 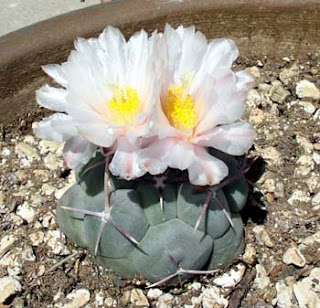 Here's just a quick photo essay of what's going on in the yard. As I promised, I'm posting a photo of the Thelocactus hexaedrophorus which opened its two flowers today for the first time. It's native to northeastern Mexico. 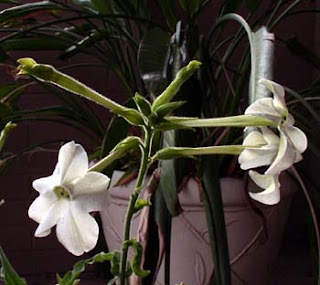 I'm particularly excited about the blooming of my Jasmine Tobacco, Nicotiana alata, native to northern Argentina and southern Brazil. I grew these in the late 1980's in Oregon and I became enchanted with the fragrance back then. A couple years ago I ordered some seed from the incomparable Nichols Garden Nursery, and this year one of the seeds I rather carelessly scattered in the various pots around the yard actually took. The flowers open up around 6:00 p.m., start releasing fragrance a half hour later, and by dark are utterly intoxicating. I love it. My friend Brad Boyle commented on how the molecular composition of the fragrance must be very similar to that of the orchid Brassavola nodosa, which I've actually seen blooming in the Yucatán (but it was too high in a tree to smell; it sure looked fragrant.) 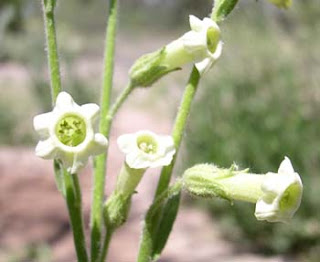 Here are some flowers of the native Desert Tobacco, Nicotiana obtusifolia, which has naturalized all over the yard. Sadly, it has no fragrance. 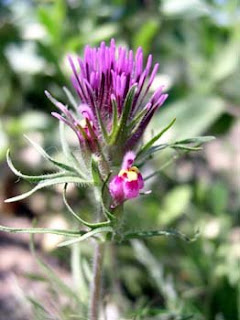 Here's another native flower that probably sprung up from some wildflower seed mixes that we've scattered about over the years and finally responded to the excellent winter rains we've had. It's an Exserted Indian Paintbrush, Castilleja exserta. 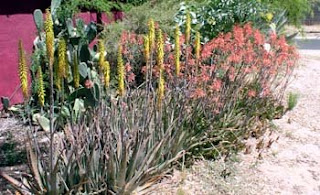 This is just a shot of the two species of aloes that are just past the peak of full bloom in the front of the yard. These thrive on neglect. 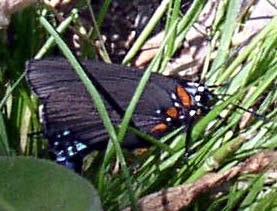 This poor photo is of a Great Purple Hairstreak, which I first noticed in the yard a couple weeks ago, a female laying eggs on a mistletoe in the native Velvet Mesquite just outside my bedroom window. This male is probably the same individual I saw darting around yesterday. Quite an exciting bug for the yard list. 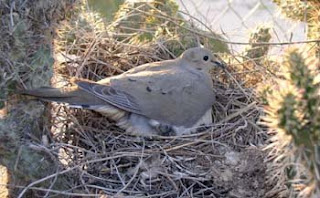 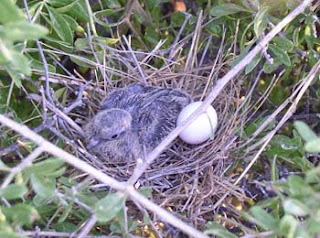 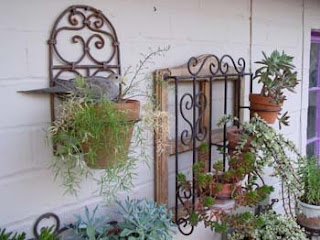 Finally, we have FIVE pairs of Mourning Doves breeding in the yard. Or rather, had. I went out to take pictures and found one of the nests empty. It still had eggs yesterday, so perhaps some predator found them. But here are pictures of three, including one re-nesting on the fern asparagus on the east side of my house. The one in the top photo is nesting on an old Curve-billed Thrasher nest.
Posted by Birdernaturalist at 6:16 PM