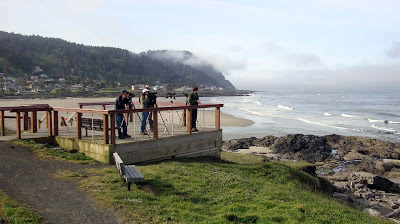 Yesterday I had a fun day birding with friends on the southern Lincoln County, Oregon coast. The impetus was the North American Migration Count, where observers all over the country submit their birding results from the second weekend in May to a county coordinator. Forrest Rowland had offered to cover southern Lincoln County, and I offered to help out if he could deliver me to my dad's house in Corvallis for my five-day visit before my Oregon in Spring tour.

Graham Floyd joined us for the day, and our friends Daniel Farrar and Lydia Cruz joined us for the first part of the day. We actually first started birded at the south jetty of the Siuslaw River in order for Daniel and Lydia to catch up with us. There weren't many birds here, but it was a good place to whistle in Forrest's lifer Wrentit.

We next made a productive stop just past Sea Lion Caves, even though this was still Lane County. Since Forrest had never been to the Oregon coast, this was a must-see location, and besides, he needed his lifer Rhinoceros Auklets, which breed here. 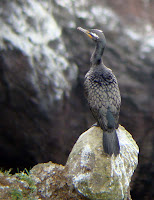 A Double-crested Cormorant there in breeding plumage was unusual.

After a seawatch at Yachats (photo at top), we headed inland along Yachats River Road and then returned via Cummins Ridge Road and Cape Perpetua. 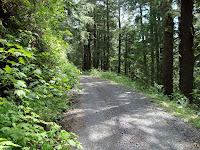 The View from Cape Perpetua after a marine layer had moved in. It would have been a stunning view earlier in the morning.


After completing the Beaver Creek Marsh loop we drove to Corvallis on Hwy 34 up the Alsea River from Waldport. We made a few stops along the river while still in Lincoln County, seeing Common Merganser and an American Dipper. The most exciting find, however was a suface-foraging Coast Mole, Scapanus orarius. 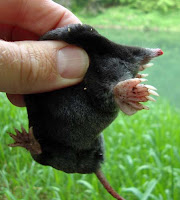