It was pretty exciting news when the birding community heard that the Camp Chiricahua group of teenagers, led by David Jasper, had discovered a Brown-backed Solitaire in Miller Canyon, south of Sierra Vista, Arizona. This is a Mexican species that had been seen only once before in the United States.

I went up the very next day, Friday July 17, with several friends. Well, despite there being at least 40 birders up there searching all morning long, it was not seen or heard. Even though we didn't find our target, I really enjoyed the social event, rekindling friendships with people I see once a year or so. And on top of that was the wonderful diversity of regular, breeding birds in the canyon as well as all the other plants and critters that make for a complete natural history experience.

As a result of the monsoon – summer rains that are more predictible in mountains such as these – flowers were in bloom, and bugs were about. The flower at the top of this blog entry is Drummond's Woodsorrel, Oxalis drummondi. 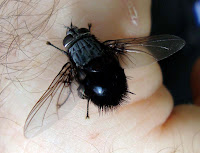 This harmless fly in the family Tachinidae was quite common. It's in the genus Lechenaultia, but species apparently can't be determined from a photo like this.

There isn't a handy field guide to the snails of Arizona, but a paper from 1909 listed quite a few extremely local species in this one mountain range. This one is probably Sonorella granulatissima, but it may be something in the genus Ashmuella. One of the main "field marks" is the shape of the penis, which you can see only by dissecting a snail.

This is an Orange-edged Roadside-Skipper, Amblyscirtes fimbriata on a Geranium flower. This skipper occurs in the United States only in the southeastern corner of Arizona. 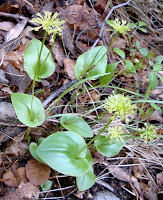 A close-up of one of the racemes.

My friend John Mueller showed me this gorgous beetle. I recognized it as a fruit chafer, but only by checking Bugguide.net did I find that it is called Gymnetina cretacea, found in the U.S. only in Arizona and New Mexico. 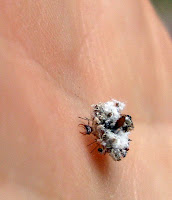 This puzzling, tiny critter is a larva of a green lacewing on the palm of my hand. It has piled bits of debris on its back for protection from the ants that defend its prey, aphids.

Here's is John Mueller watching the two stars in the canyon this day, a pair of Spotted Owls. They are perched in the upper left of the photo. 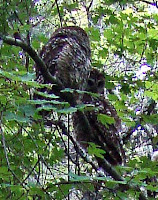 Here are the owls cropped from the same photo.
Posted by Birdernaturalist at 5:56 PM