On Wednesday, July 22, I made a second attempt to find the Brown-backed Solitaire that was sighted for the first time last week in Miller Canyon, in the Huachuca Mountains south of Sierra Vista. The bird was relocated a couple days later 3 miles to the northwest in Ramsey Canyon, and it seemed to be reliable around mid-day, coming to Wilcox's Barberry. I rode down with my friends Peter Salomon, John Mueller, and Dylan Radin. I saw the bird almost immediately upon our arrival, and the next hour or so it stuck to the trees higher on the slope, singing off and on. 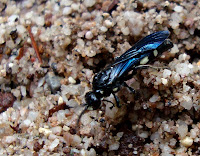 We endured a light rain, and my attention was drawn to this pretty wasp crawling on the gravel road in the understory of the oak forest. It was apparently chilled and could not fly. According to George Waldron at Bugguide, it's the rarely seen Epomidiopteron julii, in the family Tiphiidae (there are about 10 families of wasps in North America).

There were some cool moths and other insects on the wall of the visitor center, apparently having been attracted to the night lights: 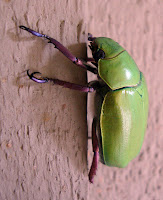 The scarab beetle Chrysina beyeri. This is apparently a favorite food for Spotted Owls in these canyons.


The tent caterpillar moth Dicogaster coronada. The female is much larger than the male, having laid eggs here on the sign. 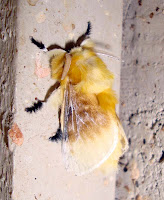 The flannel moth Megalopyge bisessa. The caterpillars of this group of moths have very painful stinging hairs, and some tropical ones are even quite dangerous.
Posted by Birdernaturalist at 3:39 PM