I'm on my way home after three interesting days in SW Lombok. I tried reaching a tract of remnant lowland forest, but it's very hard to get to. So I touched on the edges, mostly birding in secondary forest and scrub, and still having a good time. A serious effort to access the Batu Gendang forest reserve would take perhaps two full days of on-site planning and asking around, a day to get there, and then some camping. Another trip, probably for someone else.

But I did see some great things, perhaps most exciting an Orange-footed Scrubfowl; while known to locals, it had gone unreported by the ornithological community for over 100 years. There were no 20th century records.


Another good rarity to confirm from near Bangko-Bangko and even in poor habitat at Mekaki was Cinnamon-banded Kingfisher. I got recordings and even managed a digibinned image. 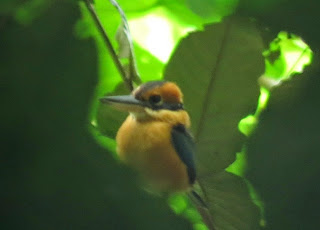 I spent the past two nights in the little Hindu village of Batu Leong, birded near Mekaki Beach by hiring a moped and driver, and spent an afternoon snorkeling at Gili Nanggu. It was great.I made friends with Madek from the hotel and his little friend Ketut. 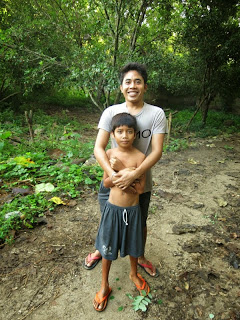 Posted by Birdernaturalist at 2:10 AM