The Monsoon is Here! 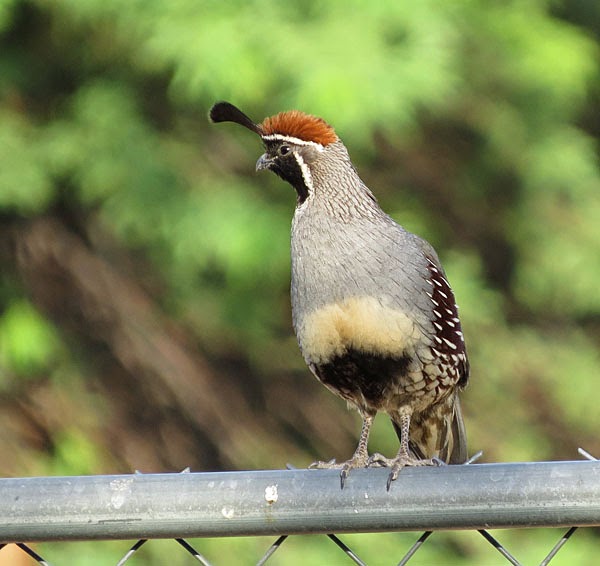 This past Thursday morning, dawning typically sunny and already 80°F (27C), I had my coffee in the back yard, watching the 3 or 4 hummers fight over 16 feeders, noted the Verdins giving their “dzrr dzrr dzrr” call to warn everyone of the approaching Cooper’s Hawk, and wondered if the lone male Gambel’s Quail above was acting as sentinel for his mate that might be setting on a clutch of eggs. Just a few days ago they were a pair, walking through the yard together each morning.

By early afternoon it reached 105°F (41C), but there might be some clouds building up to the south. And then by 3:00 p.m. it looked like this. All dark overcast, lightning not far away (I quickly shut down my computer and unplugged everything in the house), and the wind howling through the neighbor’s Red River Gum, throwing huge curls of peeling bark all over the place. 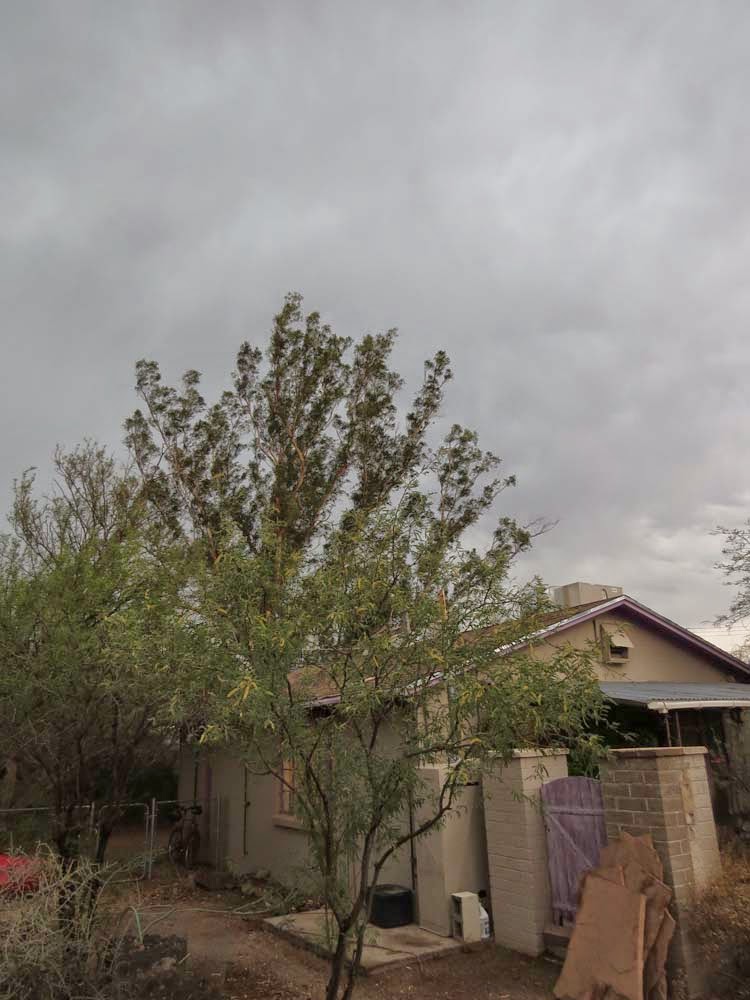 We got about 0.2 of an inch in a moderate downpour, but it continued to drizzle for about an hour or more, which is a very good kind of soaking rain. And then in the early evening before it got dark, the hummingbirds descended on the yard. It was amazing show, with perhaps 50 (or 100?) individuals zipping and zinging, chasing and chipping. A large majority of them was more or less divided evenly between Anna’s and Black-chinned, with there being a few Broad-bills and at least one Costa’s, a juvenile that appeared today for the first time this summer. It was already too dark for any good photos, but in these shots (the first without flash, the second with) you can barely make out three hummers fighting over this feeder. 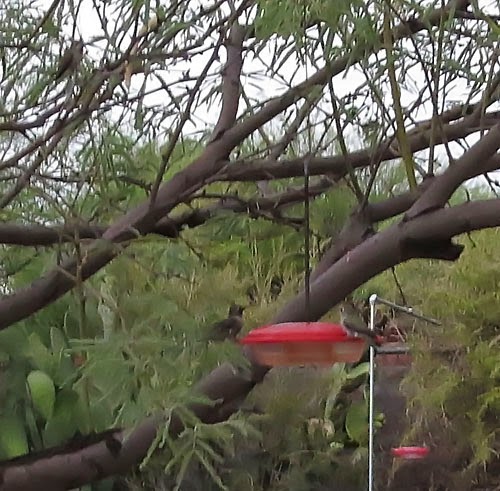 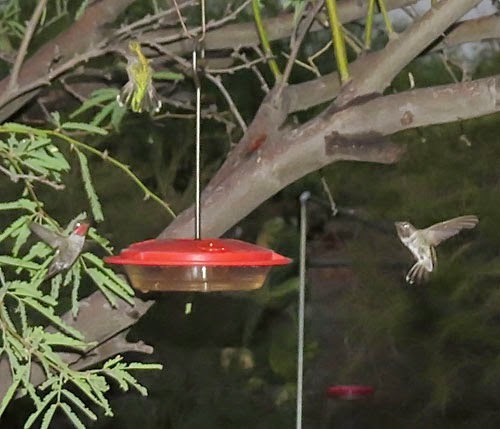 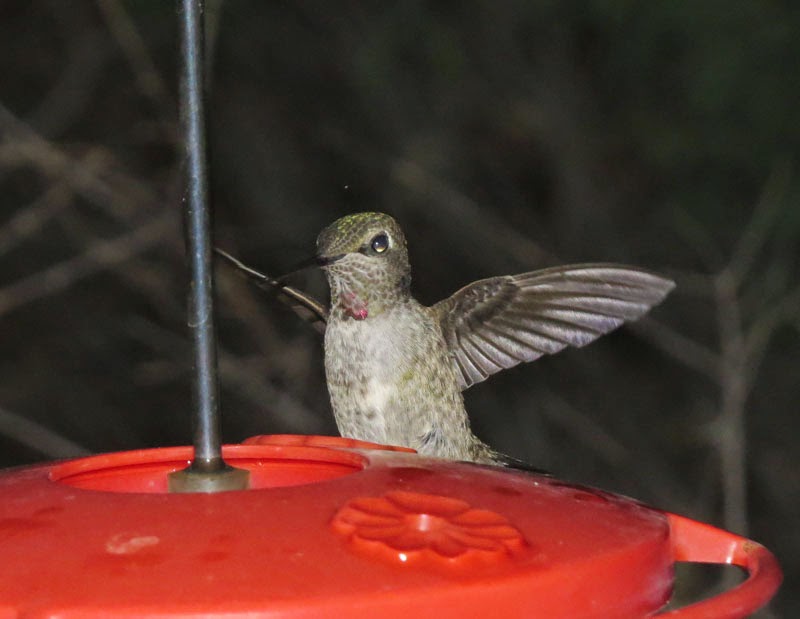 This Anna’s Hummingbird (on top of the garden hook) was trying to hoard this feeder for himself. 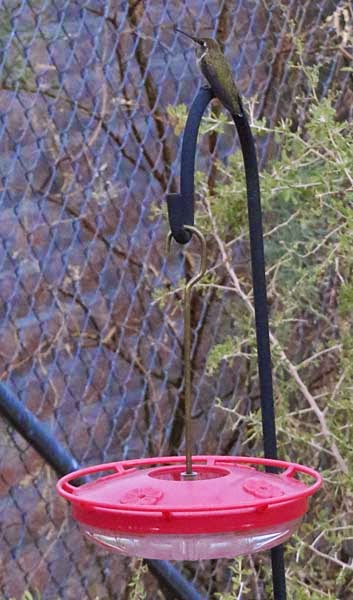 Another feeder was possessed by this Broad-billed. 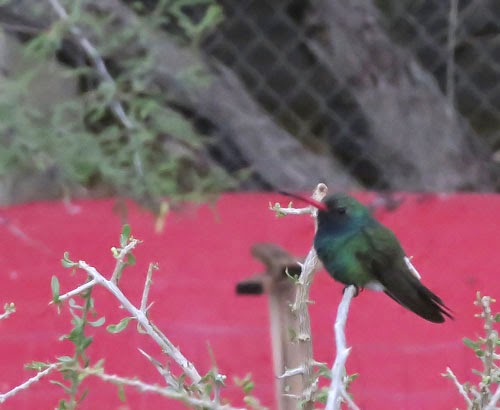 With the cooler, moist air signaling a potential shutdown, our lone yard colony of Rough Harvester Ants (Pogonomyrmex rugosus) were out in huge numbers, collecting seeds from all over the yard, up to 20 or more meters away. 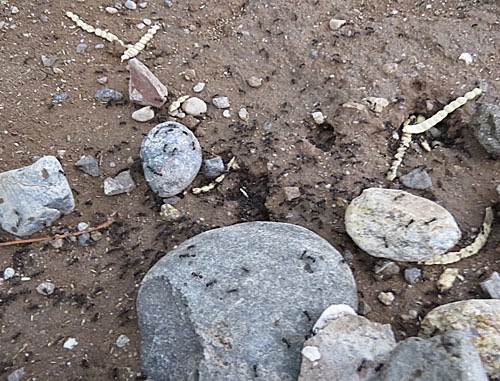 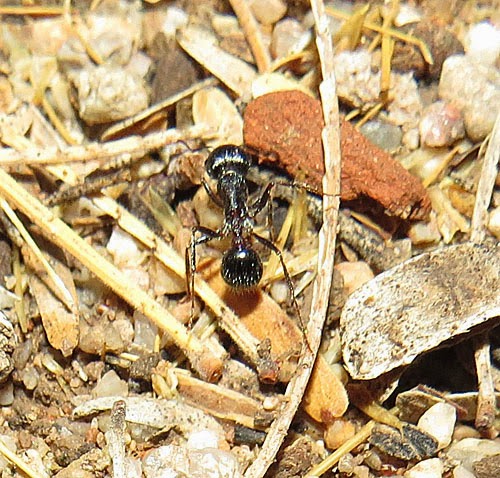 I couldn’t stand anywhere with out one eventually crawling up onto my feet. Though they are slow and docile, usually turning back as soon as they sense skin, they will sting (yes, sting, not bite) if truly perturbed. One got me on the toe, and it’s a very unpleasant pain that lasts about 10 minutes. On the other side of the yard we have a small colony of Pogonomyrmex barbatus, the Red Harvester Ant. I’ve been stung by that one once (I picked one up to see its beard), and later learned that it has been considered one of the most painful hymenopteran stings you could possibly experience. I can vouch for that. The worst is that from a Tarantula Wasp. Good thing to keep in mind, and I won't be trying to see its beard any time soon.

Posted by Birdernaturalist at 8:04 AM