Home between Oregon and Peru in September 2017

In early September I had just one full week at home in Tucson before my next tour. I made the most of it, meeting with friends, doing errands, and getting ready for Peru. One of the more ambitious things I did was host my “Almost Annual Pizza-Making and Wine-Tasting Party.” I invited perhaps 50 people and at least 30 were able to make it last minute (including my friends Kate and Mich on their US visit between jobs in Nepal and Swaziland). Everyone enjoyed making their own pizzas from the 45+ balls of dough I mixed up the night before, and I had spent a couple days buying up some Italian reds for the blind taste testing. All were under $10, most from the big-box Total Wine & More, but the cheapest was the Barbera D’Asti $5.99 from Trader Joe’s – and it won the taste testing hands down. 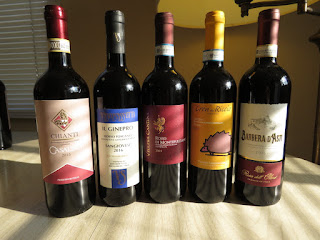 As I did errands over the week, I kept an eye on my porch light. One night I found this tiny but distinctive beetle which I had noticed in my North American Insect Field Guide by Kaufmann and Eaton – Colliuris pensylvanica. 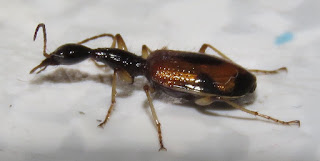 There wasn’t a lot of moth action at the light, but this unassuming Erebid Drasteria inepta was new for the porch list. 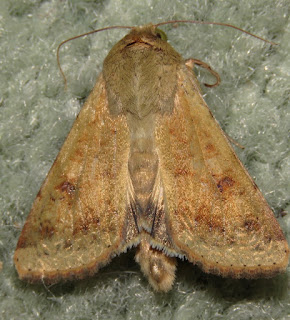 The monsoon this year was early and abundant, but it quit unusually early as well, with the last rains falling sometime in August. Yet on the evening of September 5 this huge Sonoran Toad, Incilius alvarius, was on my doorstep. 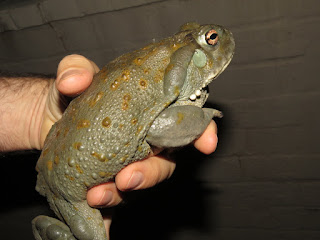 Three days later I was on my way to Peru.
Posted by Birdernaturalist at 5:27 AM