The second half of my post-birthday extension in Brazil was to the state of Minas Gerais. The attractions here are Maned Wolf at the Caraça Sanctuary and the wild grasslands with chance of Giant Anteater at Canastra National Park, and of course some really great birds. I planned on two nights in each place to keep the trip affordable, and 16 of my friends joined me for this part of the adventure. Having departed Cuiabá on a pre-dawn flight I thought for sure we’d have some time for birding once we got to Caraça that afternoon. It’s only about 3 ½ hours from the Belo Horizonte airport, unless there is a traffic issue.

There was a traffic issue. At least we got some birding in while waiting for the line of vehicles to move. 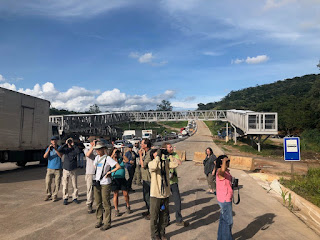 It seems to have been highway construction that caused the long delay, and it took us about 6 hours and 15 minutes, arriving just at dusk. In any event, we were in time for dinner, and right afterward we assembled on the porch in front of the church entrance. In a short time our hoped-for guest appeared – Maned Wolf, Chrysocyon brachyurus (this photo is from my tour year before last). 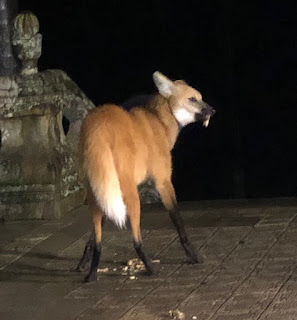 January 18 was our one full day in the lushly forested valley and naturally scrubby hillsides of Canastra. It’s a gorgeous place, with plenty of draw for even the non-birders – waterfall hikes being a favorite. There are birds everywhere, including many Dusky-legged Guans right around the buildings. 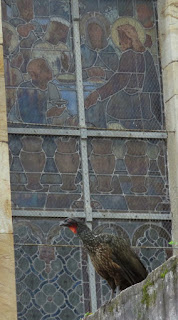 We saw many local specialties such as this Dubois's Seedeater, which looks like a washed-out Yellow-bellied Seedeater (and some consider them to be one variable species). 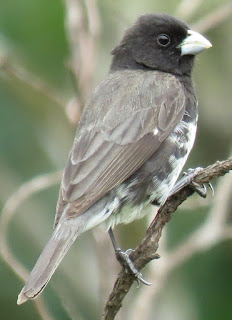 Surely a caterpillar host for a local species of swallowtail, this pipevine is Aristolochia smilacina. 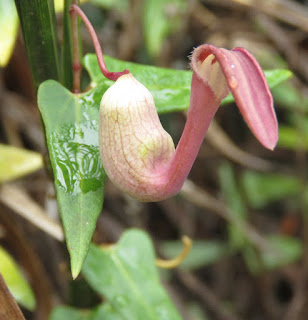 Not all skippers are brown and boring; This firetip is Sarbia soza, and this submission was new for iNaturalist. 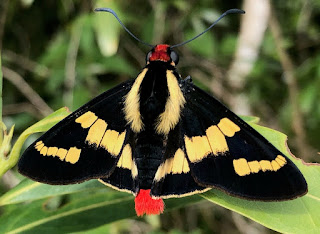 This wasp-mimicking katydid was a stunner. It even flicked its wings like a tarantula hawk. Thanks to the orthopterists at iNaturalist, I learned that it's in the genus Scaphura sp. 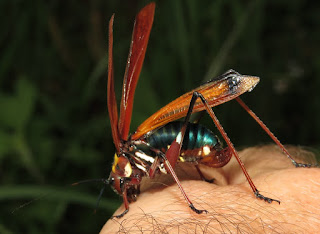 We then had a long day’s drive across the state of Minas Gerais to São Roque de Minas, with a lunch stop where we saw both White-rumped Monjita and this Gray Monjita in an adjacent field. 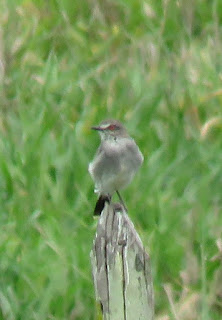 Like at Caraça, we had just one full day at Canastra, which I divided into two halves. The morning was devoted to driving up the São Francisco River (locally nicknamed Velho Chico, which I roughly translate as Old Frankie), making frequent stops at all likely places for the super rare Brazilian Merganser. We practically wrung the river dry without a single duck of any kind. Our driver knew birds too, and he had a way with tinamous. First he coaxed a Small-billed Tinamou to walk across the road, then a little later he got this Spotted Nothura to walk out in the open and sing at point-blank range. 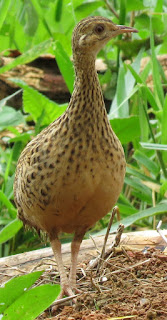 I found another pipevine (Aristolochia), this one much larger, but I don’t have a species name for it yet. 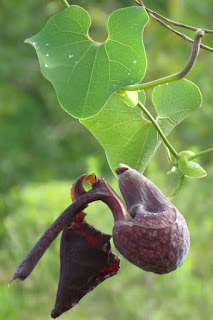 The other half of the day was spent on the top of the national park, primarily in search for Giant Anteater. On the way up our driver stopped opposite this Red-legged Seriema which was perched by the side of the road. It was unfazed and unimpressed by this big bus. 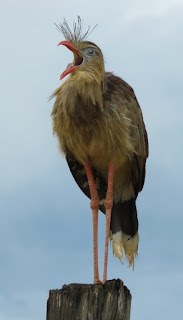 Alas, we never did see a Giant Anteater, despite our odds being pretty good (the November WINGS tour has never missed it so far). Perhaps a bit of a consolation for the mammal watchers was this Pampas Deer, Ozotoceros bezoarticus. 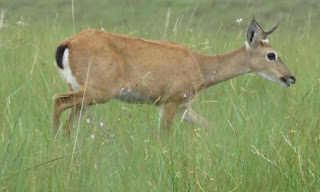 While some of us birded, the non-birders enjoyed a lovely walk along the road through the magnificent grasslands. We stopped for just a few, such as this local Ochre-breasted Pipit, which was a lifebird for me just this past November. 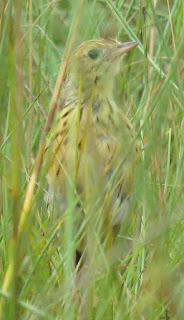 Pearly-breasted Seedeater turns out to be very common this time of year; in November only a very few were starting to set up territories. 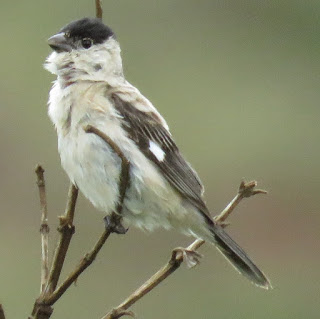 I had hoped we could rush along to the end of the road at the top of the waterfalls of the São Francisco, where we would have one last chance at the merganser, but not only were there more specialty birds to see (like Sharp-tailed Grass-Finch, Black-masked Finch, and Cock-tailed Tyrant), but our bus was excruciatingly slow on these dirt roads, not going more than about 10-15 km per hour. It was getting to be dusk while we were still a few kilometers before the falls, so we made one last stop for plants when Jake spotted a Brazilian Merganser flying super fast, way out over the grasslands! Most of the group got it, missed by those who were standing on the wrong side of the bus and never saw which way it was flying. Not the best views ever, but still a magnificent find.

The plants here were also just amazing. There are several confusing genera in the family Eriocaulaceae, but all are fascinating, distant relatives of grasses called pipeworts. 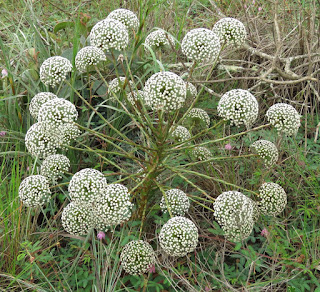 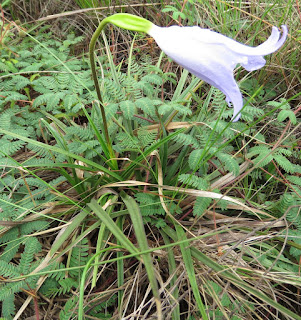 This gorgeous member of the amaranth family is Gomphrena arborescens; it had me fooled as a composite at first glance. 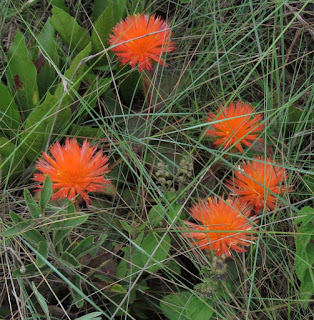 Posted by Birdernaturalist at 10:32 AM