My recent 18-day tour to Brazil may have been more about mushrooms, but there’s a lot to look at in the Amazon rainforest. These beetles I photographed below are a good example. Most people have heard that beetles are the most speciose group of animals in the world, but some experts have been saying recently they may be outnumbered by wasps. Most are so tiny you would never notice them, but the big, showy ones – let’s call them macrobeetles – are diverse and beautiful enough to elicit an “inordinate fondess” from any biologist. I only started paying much attention to beetles because of my friend Margarethe Brummerman, who I first got to know through mothing and birding outings in SE Arizona, and her fascination with beetles got me to look a lot more at them. I really look forward to the book she is co-authoring and illustrating on the beetles of Arizona.

Most of the beetles below were at Pousada Rio Roosevelt in the state of Amazonas, but a few were from Mato Grosso, where we were briefly in the Pantanal and a few days at the ecolodge Jardim da Amazônia.

My favorites are the pleasing fungus beetles, family Erotylidae. These should not be confused with other families of beetles that are associated with fungi, such as Endomychidae (the handsome fungus beetles) or Cryptophagidae (the silken fungus beetles). I laugh, because I’ve only barely heard of those too and had to look them up to mention them here. The better-known Erotylidae are usually large (the diameter of a dime or penny) and often with striking patterns.

Erotylus mirabilis is deserving of the specific epithet, meaning “marvelous.”

Update: This is apparently the similar Erotylus elegantulus. Also a nice name – it means "a little elegant." 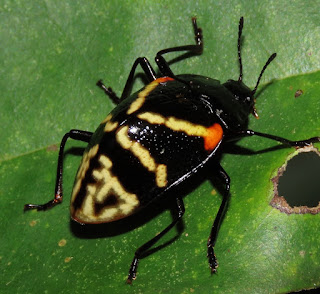 This one I have only to genus, Erotylina. 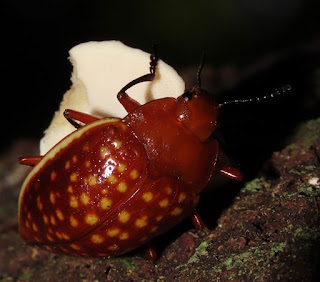 This Ellipticus dorbignyi is the only species I had seen before; it seems to be one of the more common and widespread species in Amazonia. 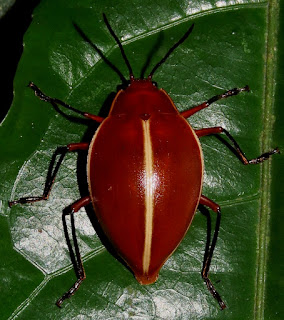 There are many species in the genus Iphiclus. 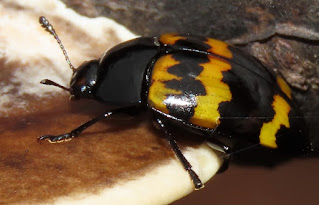 This Pselaphacus sp. was the most interesting pleasing fungus beetle on account of its behavior. It was off to the side of a loose group of its larvae on a fallen branch, and they seemed to be feasting on a small bit of mushroom and rather spread out. When we got closer for photos, we may have alarmed it, as it walked over to the larvae and herded them away and onto a larger piece of mushroom, joining several other larvae, and the whole group then coalesced into an amorphous blob that I suspect would have looked less like food to a potential predator than singly wandering larvae. 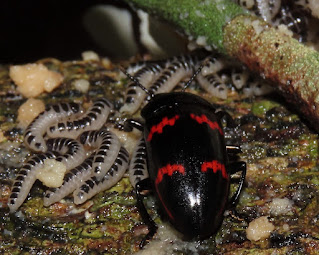 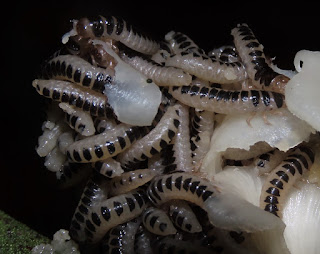 I’m also a huge fan of Longhorn beetles, family Cerambycidae, as they are often large and colorful with distinctive field marks. This pretty one is the widespread Chlorida festiva, though it’s not as distinguished with its feet all tangled up in spiderwebs after crawling around on the dining hall screen at our Pantanal lodge. I’ve seen it twice before, in Jamaica and in Costa Rica. 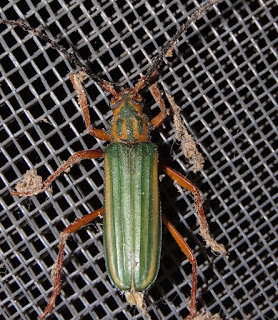 This huge one is Colobothea eximia, a new one for me. 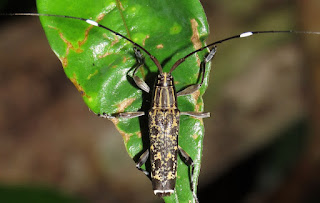 Click beetles are always fun, and though they can be large and interesting like longhorns, they often lack distinctive field marks. Many are just brown or black, and you have to go on very subtle differences in structure to ID them. The genus Pyrophorus is unusual among beetles in bearing these two glowing lights at the distal corners of the thorax. At night they are incredibly bright as they fly through the forest and are often mistaken for fireflies. They are usually much brighter and don’t have a blinking pattern though. 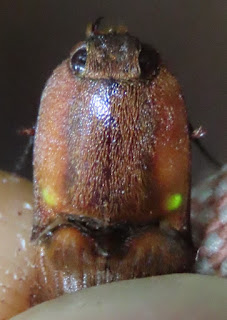 On the other hand, not all fireflies – members of the family Lampyridae (an easy name to remember) – have a blinking tip to the abdomen. I found this colorful one, probably in the genus Lucidota, during the day, and I suspect it lacks bioluminescence. 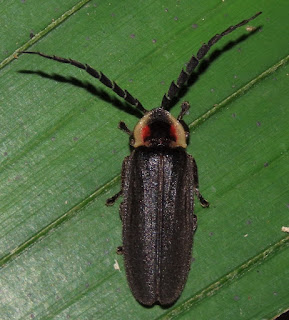 The family Scarabaeidae is one of the most familiar to people. This rhinoceros beetle looks to be female of the species with the ridiculous name Enema pan. 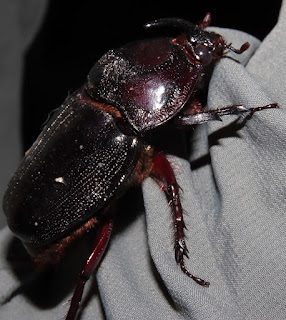 The subfamily Scarabaeinae is where the thousands of species of dung beetles belong. Hundreds of them are still undescribed, and since no one has ever collected here, these three species could be new, and I haven’t tried to pin a name on them. They sit on top of leaves in the forest understory, just waiting for a waft of animal poop to come their way, and they then home in with precision for a fecal feast. 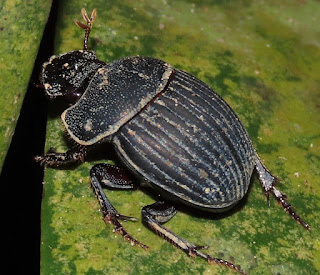 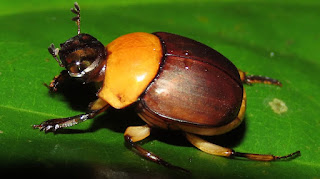 The family Tenebrionidae, the darkling beetles, is not a well-known name, but almost everyone has seen members of this family. They are diverse not only in species but also in size, shape, and color, and I rarely get the family right on the more obscure ones. Thanks to Enrico A. R. Tosto on iNaturalist, I now know that these little bark-huggers are darkling beetles in the subfamily Nilioninae, though I had guessed they were leaf beetles, due to their similar shape to tortoise beetles. I didn’t look closely enough at their antennae and legs. 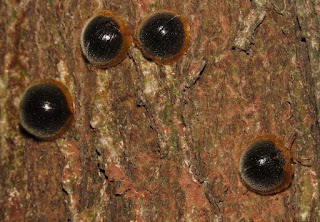 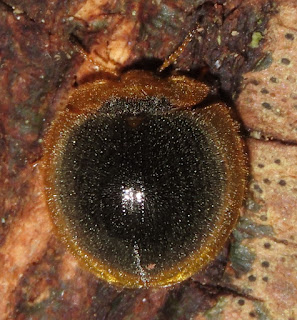 This darkling beetle in the genus Poecilesthus is slightly more typical in size and shape, yet I still did not recognize it. The way the eyes half wrap around the base of the antennae led me to believe it was a longhorn beetle. I might just give up on trying to know Tenebrionidae. 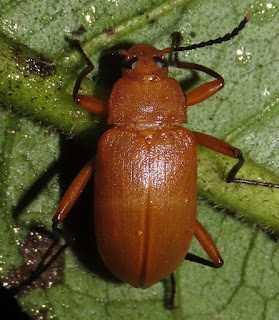 I did see a leaf beetle, a member of the family Chrysomelidae, but I wouldn’t have guessed it. This fat, palm fruit-predating larva is probably Pachymerus nucleorum. Our local guide cut open the palm nut to offer it to us as a late morning snack. I might have tried it fried, but neither of us was hungry enough to pop a fresh live one into our mouths. 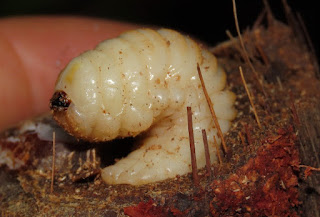 Carabidae are the hunting beetles, though a lot are also scavengers, and of course the diversity of species means there are also many other ways they make their living. But there can be no doubt that this nocturnal, sand-dwelling monster Phaeoxantha klugii is a fierce predator.

A hugely diverse family of beetles are the rove beetles, family Staphylinidae. Most are super tiny, but this one in the genus Glenus is gigantic compared to most, and it’s probably a voracious predator as well. We found several roaming around the forest floor, always near leafcutter ant nests, but we never saw what they were hunting, as they seemed to ignore the ants. 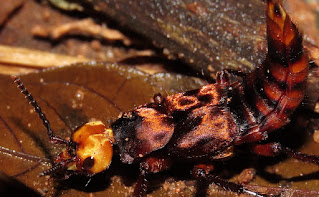 Weevils are cute. But not all weevils are weevils. This one, for example is in the family Brentidae, the so-called “primitive weevils.”

The “true weevils” that most people recognize are the megadiverse Curculionidae. This one, possibly in the genus Cholus, reveals an amazing pattern of scales and spangles with a close-up shot. It’s curled up in a defensive posture here. 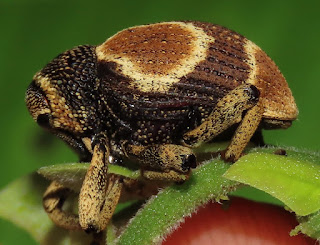 This tiny but beautiful weevil is in the subfamily Baridinae. 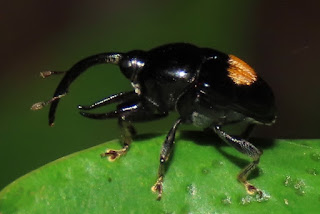 Finally, a family of little beetles that any beetle afficionado would instantly recognize – Nitidulidae, the Sap-feeding Beetles. But since I have only seen about three before (out of about 4500 species worldwide), I failed to notice how distinctive those adorable little antennae are and assumed it was another Chrysomelid at first. Incidentally, if someone wants to edit the Wikipedia article on the family, it’s horribly written, riddled with errors, and obviously painfully incomplete. 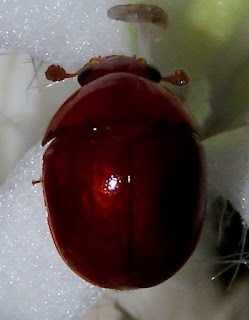 Posted by Birdernaturalist at 6:35 PM