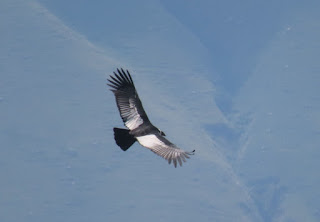 I’ve just returned home from a four-week trip to Peru, my first honest-to-goodness vacation to this amazing country. I have traveled in Peru apart from leading tours a few times, but in those “early years” (my first time to Peru was only less than 13 years ago), every trip counted as a scouting trip, and every observation was still a new and valuable experience directly applicable to knowledge I needed to feel like a competent birding tour leader. This time though, there were virtually no strings attached to my simply enjoying birds, bugs, plants, and all kinds of natural history, though I did learn some new areas that I might conceivably lead tours to in the future (especially private tours, if not publicly-advertised WINGS tours), and I even saw 13 new species for my life list. I also added 28 bird species to my Peru list. And of course, anything I learned apart from birds (which was a ton!) will naturally be incorporated into the natural history interpretation I do on my birding tours. The final species of the 531 I saw on the trip was the Andean Condor above at a well-known viewing site at the Andean community of Chonta, about 3 hours’ drive southwest of Cusco. I was with my friend and WINGS tour leader Susan Myers, and she spotted it way down the canyon below us. It soared higher and higher, and just 13 minutes later it was above our heads and drifted behind the ridge of the peak below which we had been hiking.

The site I visited the longest and already knew the best was the incomparably diverse Los Amigos Biological Station, where I’ve been taking birding tours for the past seven years. But I had never seen it during the wet season, and I wanted to offer some consultation to the staff and administrators to help them receive a growing number of birders and ecotourists. I was there for 10 days and saw so much. One species I barely know from Peru is the Black-tailed Leaftosser, and I managed a really crappy photo just to make sure I hadn’t seen one of the other, scarcer species on the list. 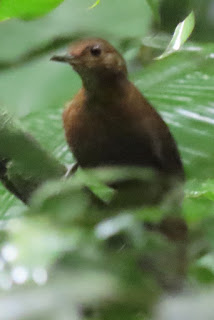 It was almost too wet for big numbers of fungi during the first few days, but on my last day, the forest floor started blooming with a diversity that is barely imaginable. This Hygrocybe sp. was on my last full day walking the trails. 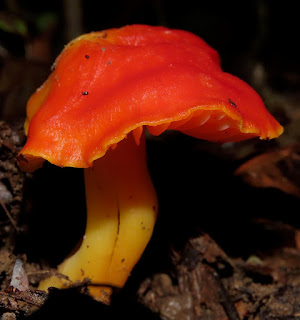 I discovered this Osteocephalus sp. treefrog sleeping in a still-furled prayer plant leaf.

I had a blast with my new LepiLED light mini, which arrived from Germany just this past November. I strung up a sheet next to my cabin on several nights and ended up with about 260 photos of moths, perhaps numbering around 100 species. This lovely geometer is in the genus Oospila. 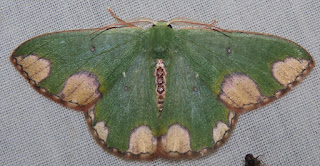 But the most fascinating encounter of my entire ten-day stay came my last afternoon when I got back to my cabin. Several columns of red army ants in the genus Eciton (probably E. hamatum; the field marks are understandably visible only with a dissecting scope, and there is probably more than one that is all red) were approaching my front steps and branching out in several directions. I noticed that some had started gathering around one of the tiny ant nests in the bare dirt immediately next to my cabin. These nests were little “volcanoes” of excavated dirt around a hole that went directly into the soil. 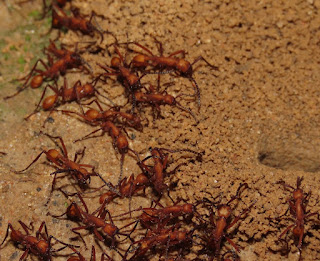 That’s my cabin on the right side of the clearing at Los Amigos. The overlook onto the Madre de Dios River is behind me here. I followed the main trail of the army ants to the forest off to the left of this the photo, and it was 80 meters long before it disappeared into the forest where their nest must have been. 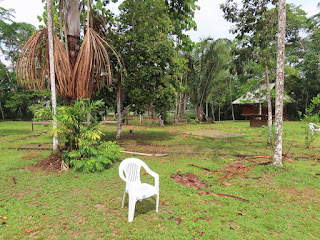 The view from the overlook. This is by far the highest I’ve ever seen the river, and it was still some six to eight weeks away from its usual annual high point. 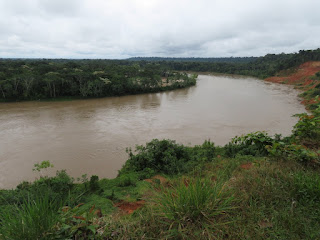 Unlike the swarming army ant E. burchellii (the one that antbirds and others attend to eat critters the ants flush from the leaf litter), this species and a few others in Eciton are known to form columns only, raiding nests of termites, ants, and wasps. I had seen this in action only once before, 15 years ago, when what was probably also E. hamatum was pilfering a huge nest of the paper wasp Parachartergus fraternus at Cristalino Jungle Lodge in Brazil. One of the wasps nailed me in the lip in a kamikaze flight, even though it wasn’t my fault.

These ants began growing in numbers around the small ant nest, but they weren’t entering yet. 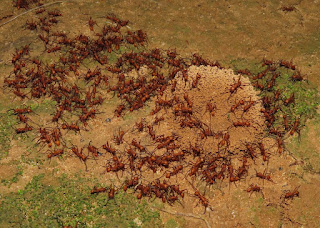 Perhaps an expert can tell from this closeup if the characters can distinguish this as E. hamatum. I haven’t posted it to iNaturalist yet. 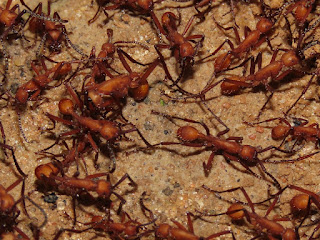 I watched intently as the numbers grew around the nest, and occasionally an army ant would begin to descend the hole only to back out very abruptly. 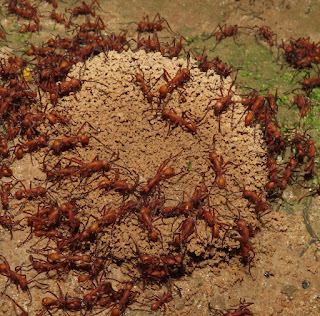 Well over a hundred ants had gathered around (while other columns were still branching out in other directions, seemingly unaware of the growing melee). And suddenly, as if one of the ants had blown a whistle, they started going down into the hole. 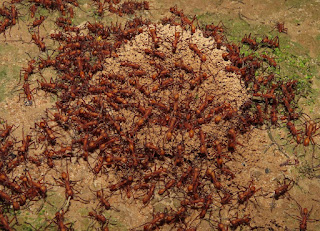 Within moments, some red army ants were emerging, pulling up the residents, which were small, black ants with big heads. I’m guessing these are in the genus Pheidole. Each small ant was surrounded by several army ants, like bullies beating them up. I thought they were pulling them apart to take back to their nest for food, but I was mistaken. 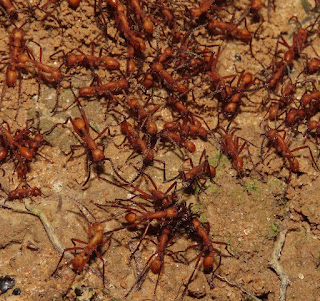 It looked like pure mayhem, as more and more of the residents were forcibly pulled from their home. My heart raced then and races again even now as I type this. 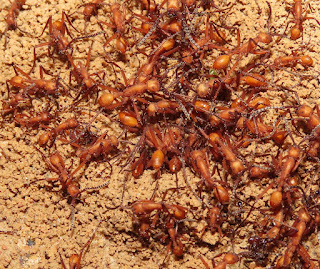 It was only a couple of minutes into the raid when I saw the first army ants emerging with the first of tiny white things – larvae and pupae of the small ants. 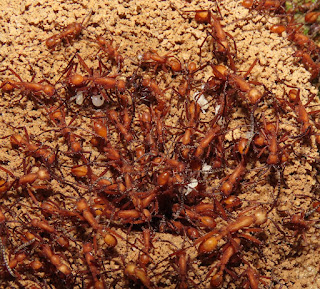 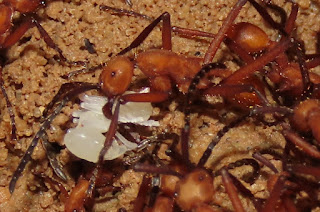 More and more started bringing them up. 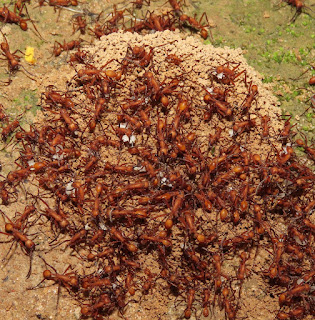 And then I realized that they had abandoned the adults they had first brought up, and those adults – the larger soldiers – were taking them on. 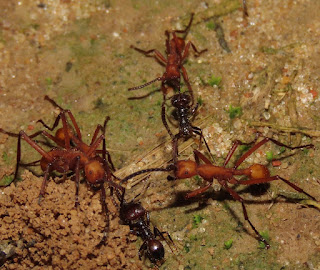 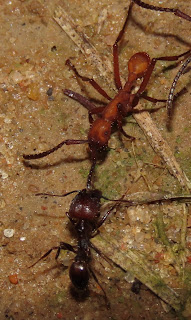 I soon realized that those ants emerging with the immature stages of their victims weren’t marching off with them. They were dropping them off at the perimeter of the nest then returning down the hole. 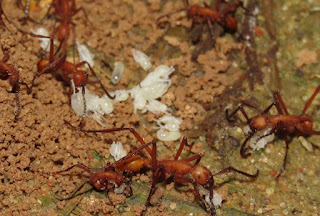 Meanwhile, hundreds of other workers waiting around were picking them up and returning to the column and thence to their own nest in the forest across the clearing. It was clearly a well-organized division of labor. This photo was taken 26 minutes after I first spotted the ants gather around the hole. 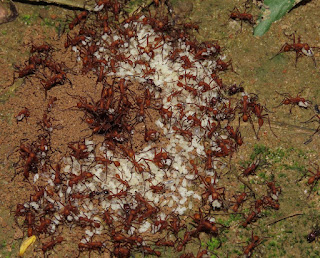 I came back out less than 20 minutes after this last photo, and this was what I found: The big-headed ant adults were back to work, both workers and soldiers (small and large), repairing their nest and presumably ready feed their queen and start building up their numbers from scratch once again. 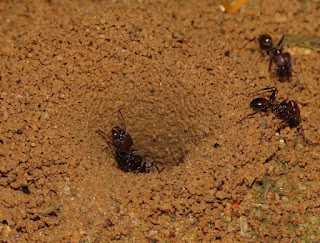 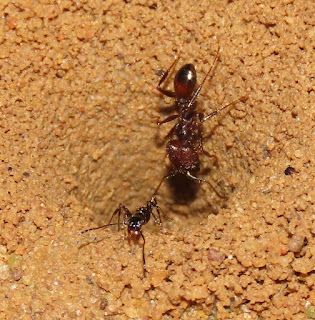 Posted by Birdernaturalist at 9:16 PM