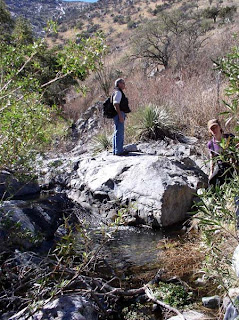 On Thursday, February 12 I joined my friends Greg Corman and Susan Fehlow and their friend Dodie Logue on a visit to Florida (prounounced flo-REE-da) Canyon on the NE side of the Santa Rita Mountains south of Tucson.

The attraction here is a pair of Rufous-capped Warblers that were first reported in late December. It was a short hike up a rocky streambed to the area that is the birds' territory, but they aren't always so easy to find. 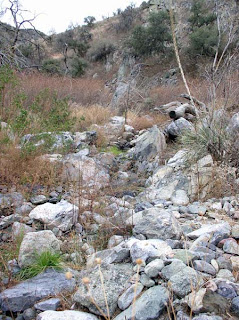 Looking through many Lesser Goldfinches, Black-chinned Sparrows, and other species, much of our time was spent standing, looking, and listening. 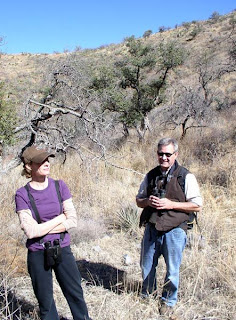 Eventually we had amazing views of both birds. These are the only individuals of this Mexican species known to be in the state (another pair is currently being seen just across the border in New Mexico).

We later wandered downstream, through a lovely oak woodland, and into a dense mesquite and hackberry bosque. 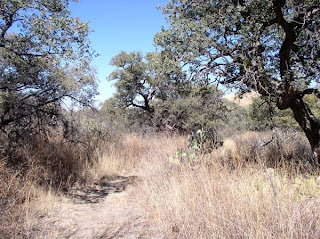 In my attempt to attract mixed flocks of small birds, I pished and imitated the calls of Western Screech-Owl. In addition to many Ruby-crowned Kinglets, we ended up seeing Hepatic Tanager, Northern Beardless-Tyrannulet, Gray and Hammond's Flycatcher, Black-capped Gnatcatcher, and many others. But it wasn't all that surprising when a Western Screech-Owl also began calling back from a distant oak tree in response to my imitation. What was surprising is that the bird continued to call when we had bushwhacked our way to that oak tree. Usually, as soon as the owl sees you, it will slink back down into its cavity and refuse to take the bait further, apparently preferring to avoid you (a potential predator) over challenging a putative intruder (my imitation). When we first checked the tree we found nothing, but then when it responded again it was right overhead, and Dodie spotted it perched on a branch. In the first photo below, you can see the bird near the center. In the second photo, I used a not very common technique called "digibinning." I just held my simple digital point-and-shoot up to my binoculars and clicked the picture. Susan helped by shading the sun off my camera lens with her hat. 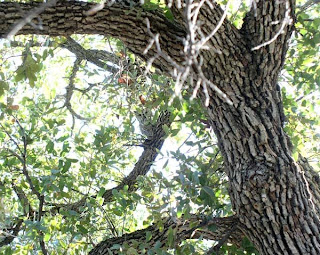 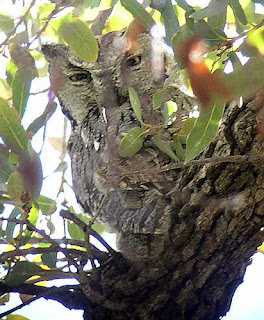 Posted by Birdernaturalist at 3:06 PM