A Fourth Morning at Chan Chich Lodge on the WINGS Tour

Last night's drive to Gallon Jug and back was fun. We rode in the open back of a truck, using two spotlights to look for eyeshine in the trees and on the ground as we drove along. We saw one Kinkajou (an arboreal member of the family Procyonidae, the same as Raccooon), many White-tailed Deer, one Northern Potoo, and several Common Pauraques. I caught the eyeshine of this Common Pauraque as it must have opened one of its eyes as we drove past. When I got out to walk up to it to see what it was, it remained sitting there, apparently wanting to sleep. 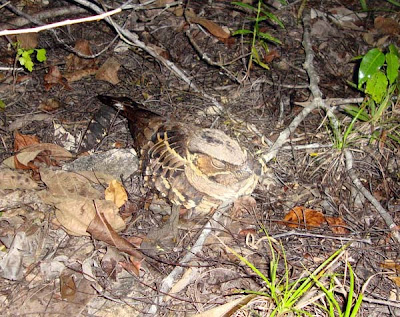 I also spotted this Milky Treefrog, Trachycephalus venulosus, on a fence post. 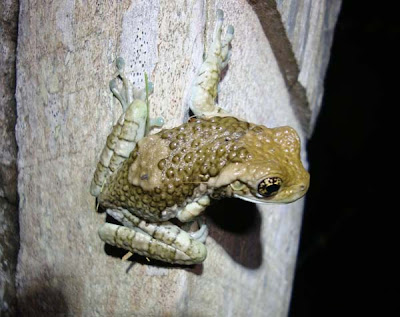 This morning we started with actually seeing the Strong-billed Woodcreeper (its silhouette, anyway) in the predawn light around our cabins. We then moved into the woods where we all had great views of a cooperative Black-faced Antthrush. I then played iPod cuts of what is considered the same species from Panama and Peru – each sounding totally different. The bird didn't react to either, a convincing argument that this one should be split, already known as the Mexican Antthrush.

After breakfast we wandered down through one of the service areas. The wild Ocellated Turkeys have become accustomed to humans, and hanging out in cleared areas near buildings not only offers them forage but protection from the predators that are more likely to get them in the forest. Two days ago one wasn't so lucky, as an Ornate Hawk-Eagle nailed it just inside the forest from the lodge buildings. Some of the maintenance staff had discovered the bird on its kill and told us about it. Amazing bird. Here are some shots of the turkeys this morning. 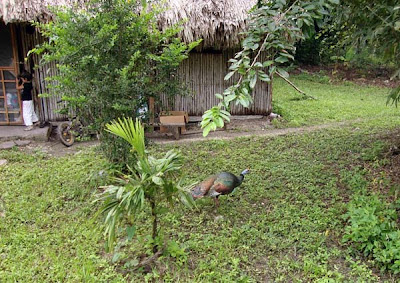 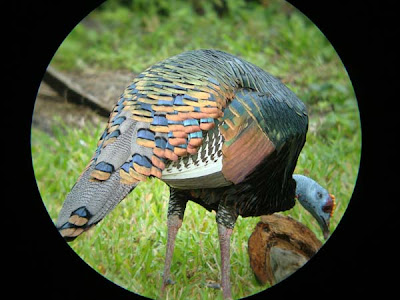 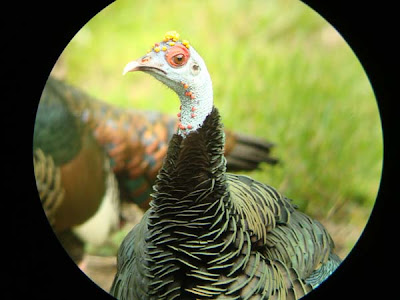 We also had a lovely female Violaceous Trogon here. 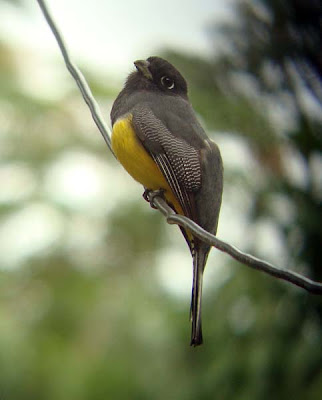 This is a very large leafcutter ant colony on the Silvester Village Road, at least the visible portion above ground. Their vast fungus garden, which they feed with the leaf pieces that they excise from the surrounding vegetation, is much bigger and located entirely underground. 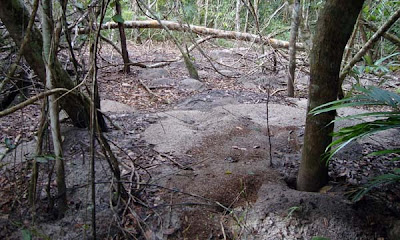 On this same road we saw some new birds for our list, including White-bellied Wren, Greenish Elaenia, and Green-backed Sparrow, and the rest of us caught up on King Vulture when an adult and immature soared right overhead. Our list is up to 172 species in four days here at Chan Chich.

We also had a lengthy, memorable encounter with a Thrushlike Schiffornis (or the Un-thrushlike Non-manakin, as I like to call it). It was catching caterpillars on the low vegetation next to the road only about a yard away from us, then hopping up to tenderize them on its perch before swallowing it. It consumed two while we watched it, completely unafraid of our presence.

A nice flower on this road, attractive to Stripe-throated Hermits, is this gentian in the genus Lisianthius. 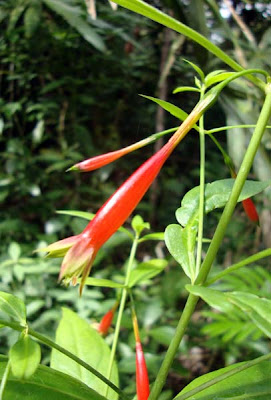 On our way back, I stopped to take a photo of this epiphytic cactus that has spread all over the roof of this outhouse.

Posted by Birdernaturalist at 12:37 PM