Of all the birds one could hope to see at Chan Chich Lodge, Lovely Cotinga ranks near the top. And we saw this gorgeous male today, at close range, often in full sun, and for over 15 minutes while he digested his latest meal of lauraceous fruits. 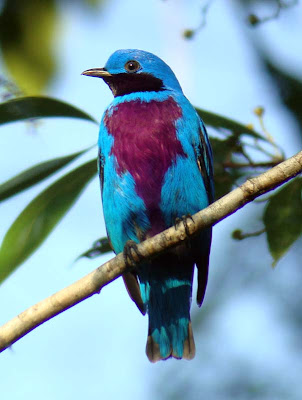 What a beauty, and a rare one at that. Raul has been working here for many years and has only seen a few; the last one he saw was 3 years ago. I saw my very first one just exactly a year ago at Palenque ruins in Mexico. It occurs from Mexico to Costa Rica but is nowhere common.

We owe many thanks to the guides here at Chan Chich for this lucky sighting. First, for finding it (I'm pretty sure Marvin was the first to spot it three days ago), and second to Raul for going out of his way to accommodate a change in our schedule so we could try for it. The past two days Raul had re-found it only in the late afternoon, coming to this Nectandra tree (probably N. salicifolia). 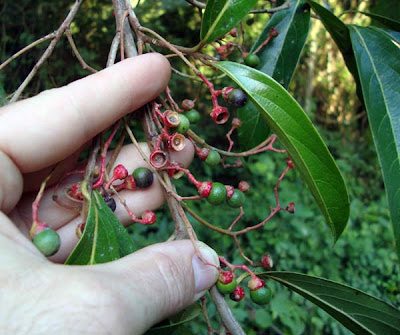 Yesterday evening we had a delightful evening of delicious appetizers and drinks at the setting of Laguna Verde. Ben Dodge, the manager of Chan Chich Lodge, greeted us, along with several other guests of the lodge. 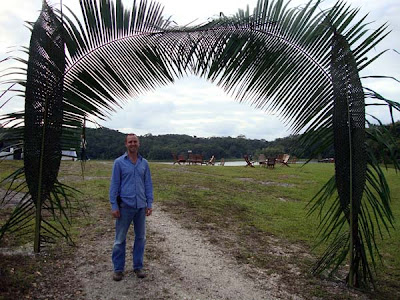 Jim and Bill took a ride in a canoe, while the rest of us relaxed. 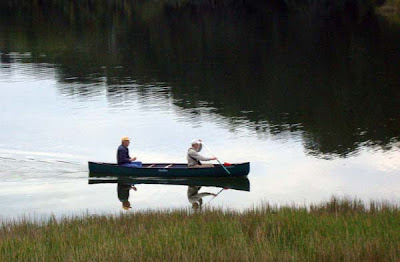 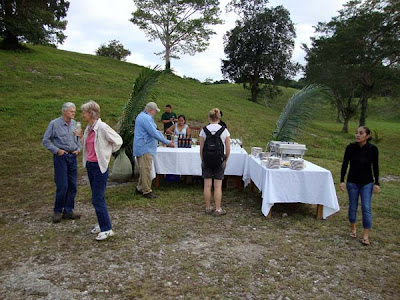 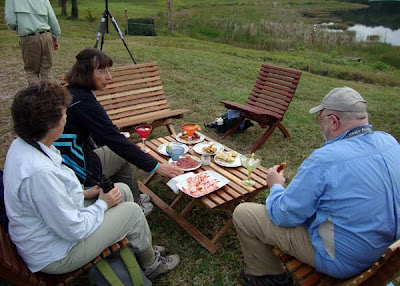 This Ziba Scrub-Hairstreak visited the Hamelia flowers right outside the dining area on a couple days. It's finally warming up enough for butterflies to be active. 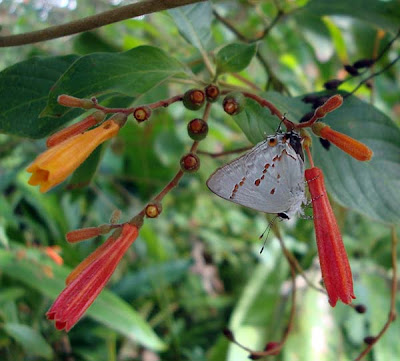 This tarantula was crossing the road as we were driving back from the Lovely Cotinga. It looks to be Brachypelma vagans, the Mexican Redrump. 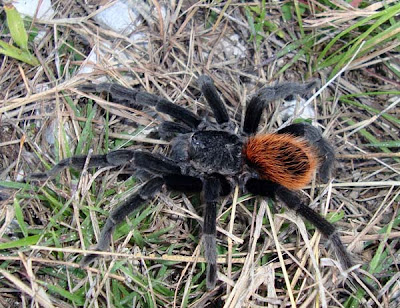 If it weren't for the views and beauty of the Lovely Cotinga, the most notable sighting today was the brief views I had of what I first thought was a Rufous Mourner, then decided had to be a Rufous Piha. Then after consulting the books (and especially internet photos later on), I realized that the bird could only have been a Speckled Mourner. As far as I know, this species has never been sighted at Chan Chich, though a paper was published just 12 years ago that documented a record from Guatemala just 39 miles from here. In the spotting scope I saw unmistakably darker wing coverts that each had nearly circular, pale rufous terminal tip. And as far as I can determine, neither Rufous Piha nor Rufous Mourner should show that. It also wasn't big enough for Rufous Piha, nor showed the orbital ring and erect loral feathers of that species. But before we could all get good views of the front of the bird, it vanished across the road. In case anyone reading this can look for it, this was 0.6 mile west (toward the lodge) from the small bridge on the entrance road. This is a low spot in the road, with a small drainage crossing the road and an old logging road going north just west of this low spot.
Posted by Birdernaturalist at 7:58 PM