This interesting snake was sunning in the dirt road leading to Rancho Salvador near Rio Lagartos, Yucatán, Mexico yesterday. I stopped the car, carefully walked up to it, and got these photos before it slinked away. It didn't dart as I expected, but rather it wagged its head back and forth as it inched along, reminding me of the nervous wobble of a praying mantis or that of a Sunbittern. I had no idea what it was, but it was easy to find in Julian Lee's book on the herps of this region: Symphimus mayae, the Yucatan White-lipped Snake. 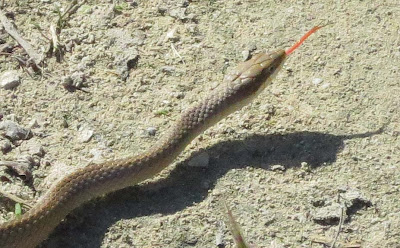 It is said to eat crickets, katydids, and grasshoppers among other insects, but little is known about it. It is endemic to the Yucatan Peninsula, including an isolated area in central Belize.

Later I went with my friends Ismael and Carlos to the Las Coloradas saltworks and saw a ton of shorebirds, but nothing super rare (Lesser Black-backed Gull was nice).

This sphinx month Madoryx oiclus was sleeping in a bush in the middle of nowhere on the roads that network through the salt works. 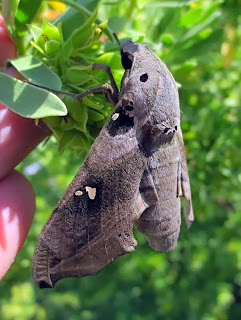 The American Flamingos are the main attraction for ecotourists here. They are unbelievably pink.

I'm looking forward to the upcoming week of birding the Yucatan with my tour group.
Posted by Birdernaturalist at 7:28 PM